Reptilians DEW Pistol was used extensively by the Reptilians who escaped the destruction of their Mu colonies and their ancient Valusia serpent men ancestors from their ancient  home lands. They're gigantic mother ships still roam across the planes through the Outer Darkness and have been seen on a number or alternative Earth home world and the like. They're serpent men based occult religion and  cults are as firmly established as their mother ships and that towers can be seen stretching across the face of countless planets. The Reptilians DEW Pistol is based upon ancient serpent men technology and uses a directed energy pulse blast based upon certain esoteric and forbidden sciences. These weapons have seen action across the planes where the reptilians have cults, tyrannical strong holds, cults, and colony worlds. The distinctive whoosh and discharge of this weapon leaves an impression that is not soon forgotten. Each of these weapons does 5d6 points of damage and has a range of 60 yards. Each weapon holds a charge of twenty shots before needing to be recharged. There will be 1d4 energy clips nearby when this weapon system is found.Each magazine will have 1d20 charges of bone jarring violence when found.

The weapon system design has a dangerous and some what sinister reputation among certain outlaw or rebel cells. They use these weapon systems which have been  seized in raids and convoys. These weapons often show up in dungeon raids and explorations into the giant underbelly of the Reptilians.
These weapons have also shown up in the atomic wastelands of many post apocalyptic worlds especially in the Mutant Future where these weapons do 8d6+1 points of damage and have a rang of  60 yards. They are quite rare because Reptilians forces seldom lose them as they are hard to manufacture. Special recovery units of Reptilians often hunt down and recover such artifacts. These artifact weapon systems are far to valuable to let these weapons fall into the hands of rebel scum and mutants. 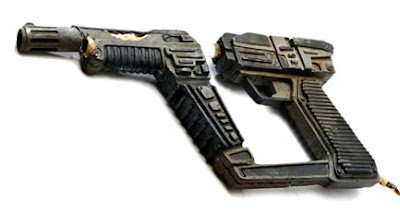 It is only now  that these weapons systems have been showing up on the relic hunter market as human beings on certain Reptilians colony worlds have begun to create the energy crystal matrices that power these weapons system.
This blog post is meant as a homage to the 'V' television series and not a challenge to the copyright or trade mark of the television series. This blog post is for educational and entertainment purposes only.
Posted by Needles at 11:37 PM