In no particular order are five of my all time favorites for your old school wasteland and post apocalyptic campaigns. As always your mileage may vary.

1974's Zardoz With Sean Connery in hooker boots. Because the gun is good. Com'n this film is a classic post apocalyptic potboiler

Damnation Alley 1977 is pure science fantasy gold from the killer monster truck the Land Master to the Hills have Eyes cannibal hill billies.

The film is so far reaching of an influence that it even appeared as a special encounter in the Fallout video game series as well.

The Omega Man is another classic film that has so much going for it, from the killer weird plague scenes, to the 70's survival mode of the film. Simply a great flick to borrow themes and such.

This has some pretty damn dark undertones but it is a great flick to use for looting ideas for PA games. Stacks of 70's status symbols for the taking. Dimensional door spells are great for this sort of adventure.

Planet of The Apes is always one of my top lists of PA films, with so much to plunder and classic lines. The original has so much going for it.

The thing is that every time I've used this film I've had players who want an ape for a PC, because let's face it apes are cool.

How much more classic does it get then with the original Logan's Run film. Self contained domed 70's cities, Sandmen, Runners,Box, and more this is one of the 70's classics
The film remains an old favorite and fortunately I own this one on DVD and VHS. A classic in every sense of the word. 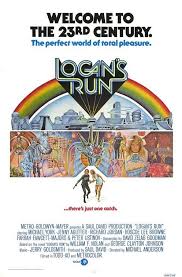