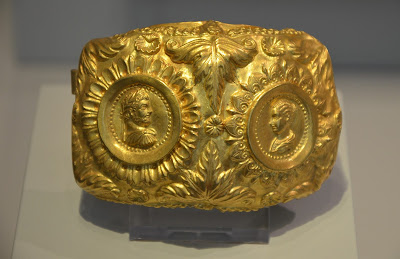 Deep in the wastelands of Accursed Atlantis there are tribes of mutant warrior metal smiths who work with the weird and strange metals found in the strange alien ruins to create unique and strange works of metalic art and relics to help protect their fighters from the ravages of the other dimensional energies and demons that rage across this horrid landscape. Here then are 1d4 random armbands that are traded with freebooters and adventurers to maybe help them survive the ravages of the wasteland horrors. 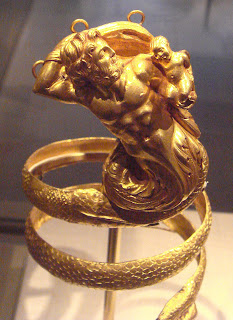 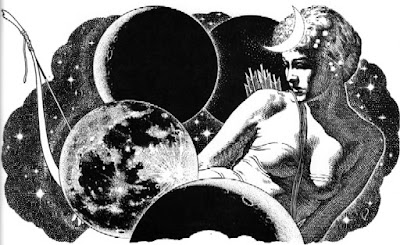 Posted by Needles at 9:55 PM No comments: 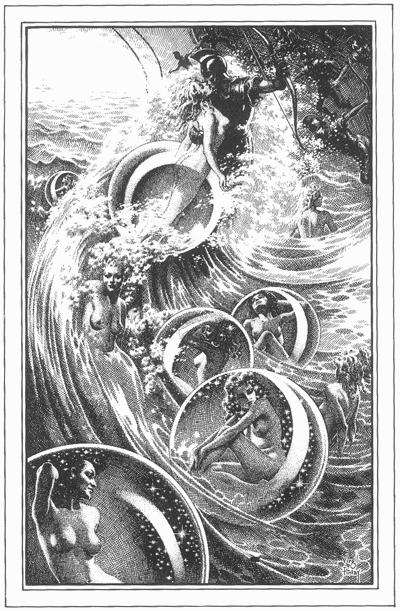 Out in the wastelands of Accursed Atlantis's wastelands there is something evil, dangerous, and incredibly ancient. 'The Eight' as it was known was worn since time before time by the ancient god emperors of Atlantis and it symbolizes the eight planar powers of the multiverse. The this relic encompasses the totality of the Atlantian pantheon of kings and queens each one has left a piece of their own spirit and soul within this item. And it is alive. Waiting for the day when yet another fool will don this item of power and learn far too late exactly what it actually is. 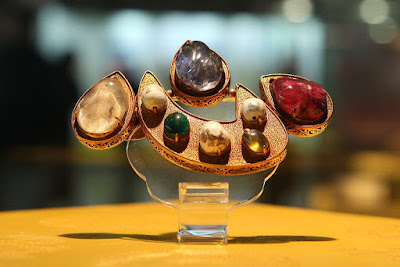 The Atlantian Eight Jewels are actually the prison for a powerful Lovecraftian demon lord who was locked away after the destruction of Old Earth and the passage onto the Outer Worlds. There are eight 'jewels' each representing the eight planar realms. The relic pulls on the power of the demon lord for its charges and magickal effects. Each time the relic is used a DM must roll a D10 for the number of charges that are available but there is a 10% chance of the demon lord trying to take possession of the owner of relic each time it is used. Once per day the Eight has the following abilities : Immunity to electricity and poison and they take a 3rd damage from acid, cold, as well as fire. They have the ability to gate in ghosts and minor shades of the dead as well as the abilities of a speak with the dead as per the spell.

The Eight Stones act as rings including the following :
Posted by Needles at 10:05 AM No comments:

So yesterday I stumbled upon a fantastic little resource that just came out from the pen and mind of Cedric Plante called the Wizard's Inheritance. This is a one hundred magic  illustrated guide of  items found within a wizard's mansor or tower. The whole product is system neutral and its illustrated throughout. The pdf is free on google drive and the book is only three dollars but is it useful? Clocking in at just twenty four pages this book is about as useful as it gets! Seriously you've inherited a collection of weird magic items for reasons. The whole thing is done in Plante's weirdly wonderful artwork and don't let the compactness of the book fool you. 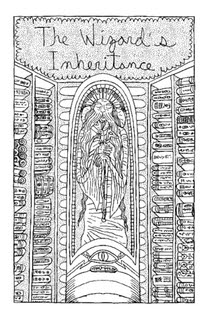 The book basically gives a dungeon master cart blanch to work his party of adventurers over with whatever plot hooks, artifacts, sinkers, and adventure doodads he's been aching to spring on them. With a price tag of only three dollars on Lulu this one is a steal. This one book has everything that can keep a retroclone game going for months and months. The party of adventurers will be going through the collection of weird artifacts for months of game time as well trying to separate the good, the bad, the useful and the terrifying. The best part is that its up to you as the DM to decide how you want to spring this on the players.
According to the intro to the Wizard's Inheritance:


And this is exectly what you get a selection of items of weird aspect and magical significance that you'll have to handcraft into something exotic, dangerous and OSR slick as hell. The choice on how to do it is going to be up to you as the DM to choose your favorite edition or retroclone system to handle the whole affair. Personally the artwork is very good a weird mix between the cartoon awesomeness of Adventure Time and Rick & Morty; of which I happen to be a huge fan. So more points right there for that. This a perfect hook for a near clone like Dungeon Crawl Classics where a solid hook and idea makes or breaks a continuing game of DCC. With the holidays coming up there's plenty of opportunity to add this one in as a Halloween or even a Christmas themed adventure location or set of ideas. The book is really that flexible. Even more so because of the weirdness of it, this book could work as a way of hooking a group of Astonishing Swordsmen & Sorcerers of Hyperborea by having the wizard of the piece actually be a retiring adventurer. This enables the book to serve a primer for some of the magic, sword and sorcery action, and high adventure of the Hyperborea setting through the magic items, souvenirs and other relics from the wizard's adventuring career. But there's far more to it then simply a one note idea, here the book can easily serve as a weird hook for a game like Lamentations of the Flame Princess or even Labyrinth Lord. The cartoon choice of artwork works in the book's favor in my humble opinion. Look go pick the PDF up and have a blast adapting it to your own OSR campaign. This book works on a lot of levels and pushes all of the right buttons and because you can preview before buying its a win/win in my book.
Posted by Needles at 11:20 PM No comments: 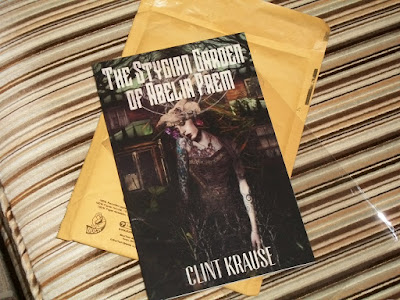 This is the actual adventure I received, the small independently produced modules continue to impress and amaze me. This adventure is wonderfully twisted and produced. 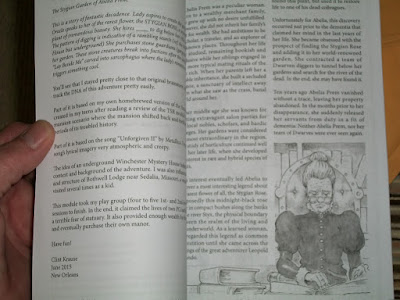 I received a copy of The Stygian Garden of Abelia Prem from the folks at  Red Moon Medicine Show, if you've never heard of this adventure nor Full Moon Medicine Show then you don't know what your missing.
Klint Crouse is a damn fine writer whose OSR  drug of choice is the Lamentations Of The Flame Princess rpg system. Klint's module is engaging, challenging, and damn fine in what it does.


The book is wonderful, its well put together, the artwork echoes the weird adventure locations that are presented in the book. Red Moon Medicine show ran a very successful Kickstarter for this adventure a few months ago and once again I'm late to the party on this one. We always hear about the negative Kickstarters well, let me tell you that this is exactly what the Kickstarter program is for. Producing weird and wonderful unique adventure modules for the OSR. There are three things that this module does well :
We know that the Gardens easily work within the confines of a Lamentations of the Flame Princess campaign but where else could this adventure work?

You place The Stygian Garden of Abelia Prem within a retroclone game like Astonishing Swordsmen and Sorcerers of Hyperborea but would it work there? Yes, the adventure location & grounds could be placed in behind a waterfall in on the other side of the river Yys. The adventurers stumble upon it and mayhem ensues. This adventure should stand on its own, as an adventure location it deserves this and its mechanisms should continue to work on a number of levels the contents should give you a clue what's in store for adventurers. 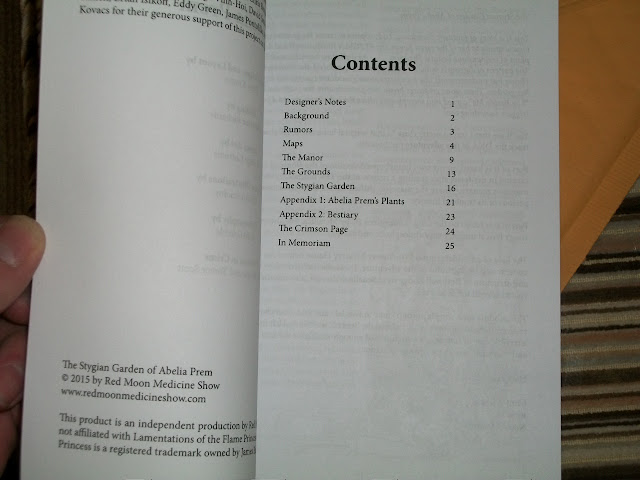 Yeah, I don't want to go into too much detail on some of the adventure elements in the Gardens but its sufficient to say that the Red Moon Medicine crew hit the high points in this adventure. This one has plenty of potential in spades of actually back fitting it into any OD&D game that flirts with the weird but I can tell you that hack and slash players are going to ruin it for the rest of the party. This is a bit of a thinking man's adventure not boring but there are several twists and turns that are going to do the players for a wee bit of thinking. This also means that the weird elements could be adapted to other retro or near clone systems. Yes that's right kids many of the elements in The Stygian Garden of Abelia Prem could be used in a Dungeon Crawl Classics game campaign with the focus on the type of weird tale that Red Moon Medicine show is famous for emulating. In the end do I think you should grab this module? Umm yes in spades because I'm very proud to have it on my shelf and on my table. The adventure's author summed up best some of ideas and design philosophies of The Stygian Garden of Abelia Prem. Abelia Prem was one very twisted lady. Happy exploring adventurers.