Imagine your party of adventurers caught up in a blood soaked land of an alternative South East Asia where two armies of incredibly dangerous beings of divine aspect are engaged in an eon old struggle. And your party is caught within the shadow of the forces of these beings.
This is a wilderness adventure in a world torn apart by war, strife, incredible devastation and very deadly forces including mutated horror, terrible monster of inhuman aspect and much,much more.

I can honestly say that Qelong is one of the best setting and adventure books that's come out for the Lamentations of the Flame Princess rpg retro clone system. I don't own a physical copy of this book and only have it on PDF after asking James Raggi for a review copy. I'm not giving the book a good review on that account. I'm giving it a good review because its that solidly well done book. And its certainly not getting enough press in my humble opinion. Kenneth Hite has done a bang up job of fleshing out his setting material for the Lamentations rules set with a variety of factions set against each other's throats and the natives who forced to the edge of existence in this module. The PC's can be part of the solution, the problem, or much more in this adventure.

The basic plot goes something like this according to the Drivethrurpg write up:
Two barely conceivable beings have fought a war for a generation over Sajavedra, a barely legendary land far to the southeast. They wish to claim its rich harvests of souls and fields, its intricate networks of ley lines and temples, for their own. They have devastated it utterly! Now, a forgotten weapon in their war - a neglected sorcery fallen from a distracted archon's attention - lies in the Qelong River valley at the edge of this near-cosmic battlefield, ripe for the taking! A hellish southeast Asian setting by Kenneth Hite, Qelong is suitable for character levels 4-6 for use with LotFP Weird Fantasy Role-Playing and other traditional role playing games.

You can find out more about Kenneth Hite right HERE
Kennith Hite is a name I'm very familiar with from his days at Last Unicorn games. And their fantastic work on the Star Trek Icon system books. I then followed his work on the Gurps book WWII Weird War II title. But it's his stellar work on one of my favorite new school games that I really enjoyed; the Unknown Armies second edition rpg and some of that line's source books.

Qelong takes many of the lessons of Hite's style of writing and design and puts it into a setting that is at once both eerily familiar and utterly alien in the form of the Qelong River valley. There are wheels within wheels within the plot of Qelong. A forgotten item left on the battle field has become the focus for forces beyond the pale of the inhabitants of this world. And that's only the tip of the iceberg. This is a devastated world that has so many possibilities lurking in the background. This is really a thinking man's sandbox adventure. There are rumor tables, things that will each your PC's, nice maps, plenty of factions, and each location is fleshed out a bit with plenty of room for customization. The maps are wonderfully evocative and dangerous locations abound with lots of South East flavored action. And a very nasty piece of magical environmental pollution that is seeping into everything and if your PCs are not careful could change them forever. 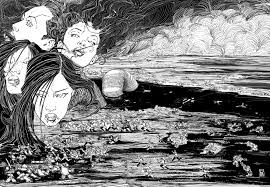 This isn't a setting that you can simply drop a party into. Well you could quiet easily do this but with a bit of care Qelong could become a permanent setting for a variety of adventures. There's a dark undercurrent to Qelong and its got a very Conrad's Heart of Darkness vibe running throughout it. And this is part of its strength. There are a ton of new monsters,weird bits of spiritual and physical corruption trickling down into the setting. And that's exactly what this module is part sand box setting book, part adventure, and part all around campaign world under one title.
The book fleshes out an entire sandbox under one heading and gives the DM plenty of bang for the buck. The ideas here are some of the best I've read for a Lamentations book, and if your looking for a book where the PC's are thrust into the deep end ringed into the setting's problems and background then this is it. The magical corruption in this book is harsh stuff and God forbid that the PC's continue to adventure in this world.They're going to run into some major problems just waiting for them to trip into. That leads to some of the factions in this war torn world. None of them are to be trusted and this evens the playing field across the board as far as the PC's place in the war torn world of Qelong. The setting has pockets of oriental and occidental city-states.There are islands of peace among the worn torn South Asian style strife. There are plenty of areas of customization in Qelong for a DM to exploit and the mercenary vibe is alive and well for a party of adventurers to exploit. Will the black powder weapons of Lamentations make any difference here? Not in the least, there are monsters,powers, and horror that will dwarf any advantage that these weapons might provide at all.
Do I think that Qelong is worth your money? Yes every penny for its setting material,epic ideas, and solid writing which is some of the best I've seen in a while.Should you grab this book? Yes if your looking for a setting that utilizes a very different take on the usual tropes of war,fantasy, divinity, and high weirdness in a sand box setting.
All in all I really want and need a physical copy of Qelong. I'm glad I got the opportunity to check this one out. Its possibly one of the essential books for the Lamentation line of products and a great little investment for your old school retro clone dollar.
Posted by Needles at 9:57 PM