"The city was strange, fantastic, beautiful. He'd never been there before, yet already he was a fabulous legend ... a dire, hateful legend." A great tale from the heyday of 'Planet Stories' and a good solid resource for a vintage Mars campaign. I've used it as part of a 'lost city of the past' on Mars as part of my Post Apocalyptic Stars Without Numbers campaign. So far as I can see it's one of this author's only efforts for the magazine. 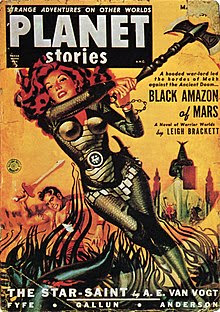 Planet Stories is one pulp magazine with a rich and checkered past. You can read more right HERE
According to Wiki :
Planet Stories was an American pulp science fiction magazine, published by Fiction House between 1939 and 1955. It featured interplanetary adventures, both in space and on other planets, and was initially focused on a young readership. Malcolm Reiss was editor or editor-in-chief for all of its 71 issues. Planet Stories was launched at the same time as Planet Comics, the success of which probably helped to fund the early issues of Planet Stories. Planet did not pay well enough to regularly attract the leading science fiction writers of the day, but did manage to obtain work from well-known names on occasion, including Isaac Asimov and Clifford Simak. In 1952 Planet published Philip K. Dick's first sale, and went on to print four more of his stories over the next three years. 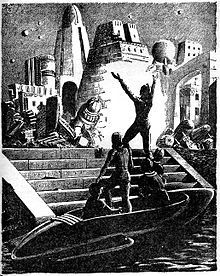 The reason why I think that the magazine is still important to OSR rpg's is the following from Wiki:
"The two writers most identified with Planet Stories are Leigh Brackett and Ray Bradbury, both of whom set many of their stories on a romanticized version of Mars that owed much to the depiction of Barsoom in the works of Edgar Rice Burroughs. Bradbury's work for Planet included an early story in his Martian Chronicles sequence. Brackett's best-known work for the magazine was a series of adventures featuring Eric John Stark, which began in the summer of 1949. Brackett and Bradbury collaborated on one story, "Lorelei of the Red Mist", which appeared in 1946; it was generally well-received, although one letter to the magazine complained that the story's treatment of sex, though mild by modern standards, was too explicit." The artwork also emphasized attractive women, with scantily clad damsels in distress or alien princesses on almost every cover.
You've got two of the most important science fiction and science fantasy writers in one magazine and under one roof writing about their own versions of  Bar errm ' A Romanticized version of Mars' Is it any wonder that it's stories are still beloved by science fiction fans even today
According to wiki
A derivative anthology, The Best of Planet Stories #1, appeared in 1975 from Ballantine Books, edited by Leigh Brackett, containing seven stories reprinted from between 1942 and 1952.   It was intended to be the first of a series, but no further volumes appeared
Too bad it would have been nice to have gotten my hands on more of these tales. If it seems that many of these Martian tales seem to be deriative of each other starting in the 1920's and working their way all the way through the late 60's. Mars has been and still remains ingrained in the public's imagination. Folks want the planet to be exactly what they always thought it was one the canals were first seen through telescopes at , the dawn of the age of rockets. Heck, ever since HG Well's published War Of The   World.
Stars Without Numbers lends itself easily to a tale such as this and adapting to a group of PC's is quite easy. The city of legend lost in the desert is a trope that has been around since the 'Arabian Nights' and even further back. Believe it or not each and every time I've used it players still fall for it hook, line, and sinker. The old tricks are still some of the best. This tale has some pretty large blank fill in the map areas to it and that makes it pretty desirable for use in adventure and campaign design. This is pretty much a drop in and go Mars tale like so many at the time. That's not a bad thing at all.
While Paizo can claim 'Planet Stories' as an exclusive. The real 'Planet Stories' ran between 1939 and 1952 with an unforgettable inheritance that has never been equaled only copied to some extent over the decades.
Grab the the tales HERE but just remember who the original trail blazers were. Folks like Isaac Asimov, Clifford Simak,Leigh Brackett,Ray Bradbury, and V. E. Thiessen.
As for me I've got a date on Mars, A Post Apocalyptic hellhole waiting to devour some players!
Happy Adventuring and don't forget your ray gun!
Posted by Needles at 8:46 AM