There are monsters in the night that haunt the grave ravaged edges of the world, these corpse feeders come at blackest points of midnight from the depths of Hell and the ravaged world of dreams. Adventurers who encounters the foul fiends in the dark of night seldom forget such meetings and often times carry the signs of such events as scars to their own graves. 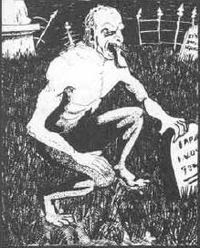 “There have been times when only a hair's-breadth has intervened betwixt myself and the seething devil-ridden world of madness; for the hideous knowledge, the horror- blackened memories which I have carried so long, were never meant to be borne by the human intellect. ”
― Clark Ashton Smith

Those who dare to tread in between worlds have reported encounters with these feeders of the dead on many worlds and beyond. Here then is a 1d20 encounter table to bedevil your own adventurers with such monsters and their kin.