"Brian Young has delivered us the sixth in the Mythos Series, bringing to life the world of Ancient Egypt. From a history of that desert land, to the mythologies surrounding its creation and the gods who carved it from the ether, the realms they ruled and the monsters they commanded. More than that, Mr. Young explores the actual geopolitical and cultural world of Ancient Egypt allowing CKs to bring their players to another world, in another time!" 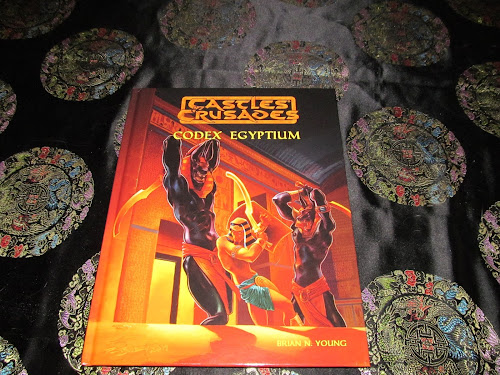 When it comes to the physicality of a game book I've gotten quite picky. So when it came to the arrival of Castles & Crusades Codex Egyptium it was mail call of some excitement for me. The packing was up to Troll Lords standards which is great mot of the time. We're not gonna talk about my go around with the USPS or my current war with em when it comes to delivery of game books.
First thing outta of the gate is the index! Yeah a solid index is a must with these books if your in the heat of play. 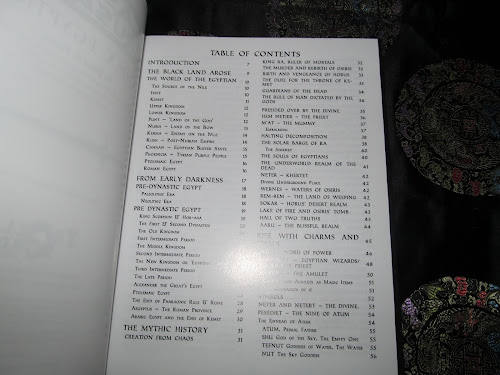 The layout & cartography is quite good & the book really does cover the ancient Egyptian  history, culture,periods, ruins, etc. quite nicely. The author brings his usual flare to the works & that's not a bad thing at all. The artwork is keyed into Codex Egyptium & doesn't look recycled. This book is dialed into both the players & the DM. 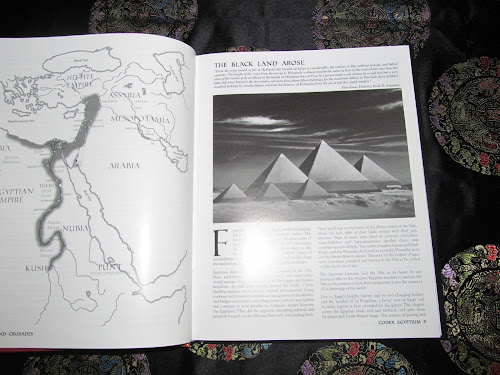 The layout is clear, the writing crisp if somewhat dry but this is Brian Young's style. The author makes extensive use of his material diving in deep to ancient Egypt. He brings this material into focus for using Egypt as center stage for Castle & Crusades adventures. Its here that we get into the history, culture, & background of C&C Egypt. 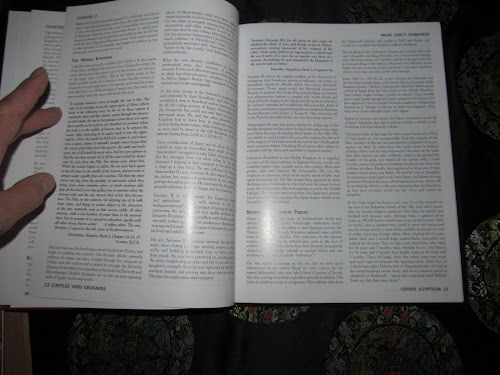 The author knows his subject but there are plenty of opportunities for the DM to build on their own imaginations & deep dives into this land of mystery or adventure. The roll of Egypt continues as we dive down into magick, religion, & the mytological core of Egypt. These are all intertwined in a dance of the divine & incredible.The role of the gods is extensive, interesting, & very dangerous! 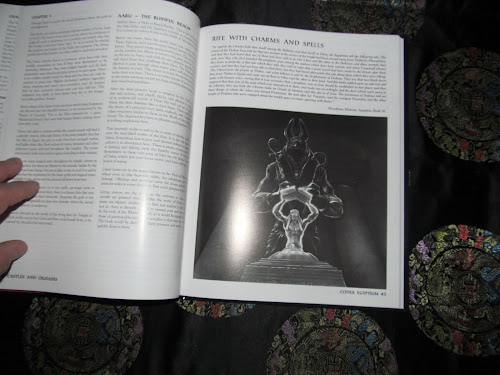 Is the Castles & Crusades Codex Egyptium worth getting & buying?! From where I'm sitting here at the table top level as a dungeon master (I'm sorry but the term Castle Keeper rankles me as someone whose been in this hobby since OD&D. So the term is dungeon master no matter the game) the answer is yes. There's a lot of care here on Troll Lords to take Castles & Crusades Codex Egyptium to the next level. 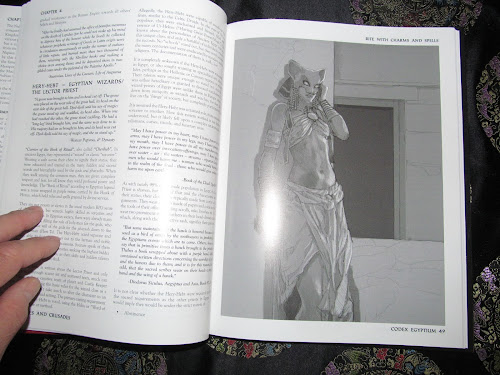 The spells, the magick, the extension of the divine is on point for where the DM wants to take an Ancient Egyptian C&C campaign. The use of social rank is going to be key here especially if the DM wants to take a party of adventures deep into an extended campaign. Mr. Young makes extensive use of his history here in the design. 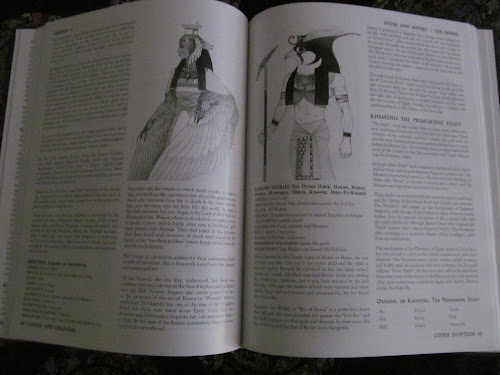 All of this ties into the mythological & historical take here in  Castles & Crusades Codex Egyptium. Why because it all ties back into the cosmology of ancient Egypt and their view of the mundane vs the fantastical. Mr.Young has simplified it to a huge extent because we as dungeon masters don't necessarily have the time to plow through anthropological texts. There are some players & DM's who will & do. Personally for me there isn't time & its one of the reasons why this book is welcomed for me. This also gets into the monsters who are extensively tied into the gods here in this book & that's a good thing. 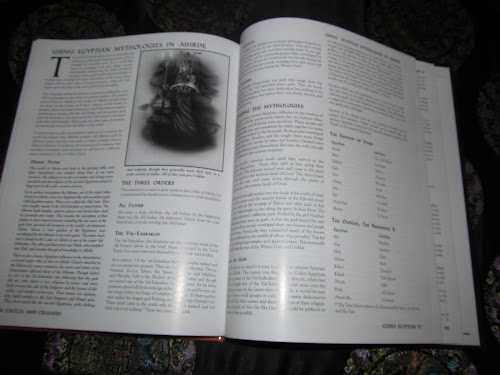 Because this Codex plugs into not only its own campaign setting but into Castles & Crusades own house setting of Aihrde. But can it tie into say Greyhawk or classic Mystara?! Or your own home brew campaign?! In a word yes! The designers & writers had enough brains to make extensive use of the too box approach. 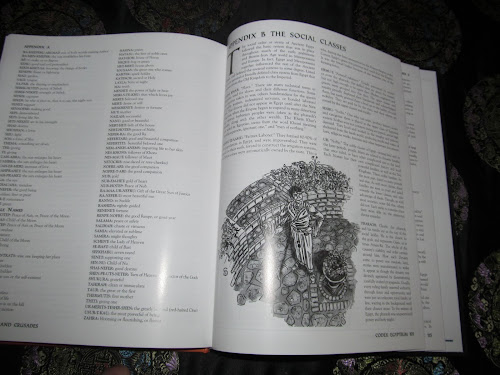 There's a boat load of appendix that allow the DM to dive into Egyptian warfare, social classes, more options, etc. This is all useful from the prospective of the DM who wants to introduce adventure elements into their games from Castles & Crusades Codex Egyptium without jumping into the deep end whole hog. 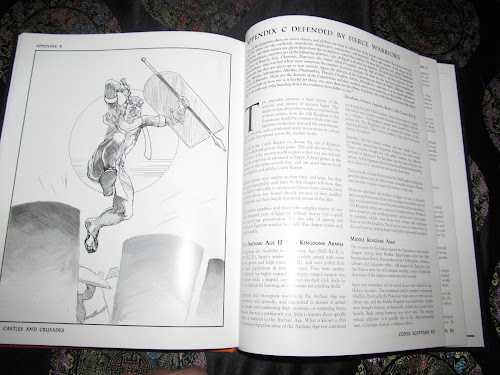 Castles & Crusades Codex Egyptium takes its subject quite well & seriously allowing the DM to get to grips with a well though  out & overall campaign book to work with. There's enough here to take your Castles & Crusades game to either the red or black sands lands here. If this the quality & direction that Troll Lords are heading then it looks to be a solid build upon for both OSR & the Castles Crusades fans. 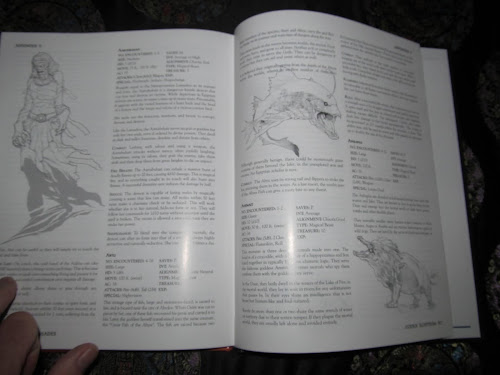 Note that this review was also done to show case the flexibility of OSR blogs whose time in some OSR fans & minds has passed. Recently I was  told that only videos would be used for the future of reviews of  OSR books & pdfs. So I personally went all in on the Castles & Crusades Codex Egyptium Kickstarter. This book was bought with my own money & this review was done personally by me. There are already several C&C  expansions for Castles & Crusades Codex Egyptium. I will be buying those & sharing my thoughts with you dear readers coming up!