"Sinbad and the vizier of Marabia, followed by evil magician Koura, seek the three golden tablets that can gain them access to the ancient temple of the Oracle of All Knowledge." 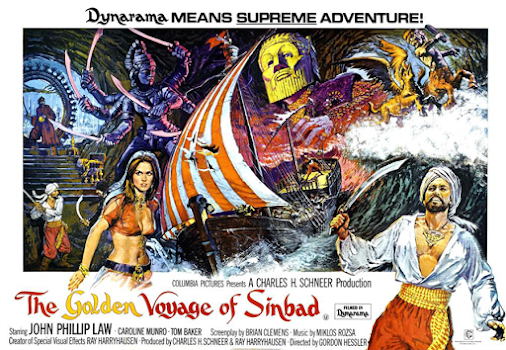 Tonight it was family movie night with an Appendix 'F' for film classic with the Ray Harryhausen & it has the 1973 charm as well as the quality that we've come to expect from a Harryhausen production. " The Golden Voyage of Sinbad" is a 1973 British fantasy film directed by Gordon Hessler and featuring stop motion effects by Ray Harryhausen. It is the second of three Sinbad films released by Columbia Pictures, the others being The 7th Voyage of Sinbad (1958) and Sinbad and the Eye of the Tiger (1977). The film stars John Phillip Law, Tom Baker, Takis Emmanuel and Caroline Munro. It won the first Saturn Award for Best Fantasy Film." all of this comes as no surprise to any fan of Producer Charles Schneer work. All of the classic Sinbad film elements are at work for "The Golden Voyage of Sinbad". The mysterious plot, the mad ravings of Tom Baker's as Prince Koura the sorercer in league with the forces of darkness. The fantastic stop motion animation of Ray Harryhausen plus a top notch cast round out this fantasy classic. 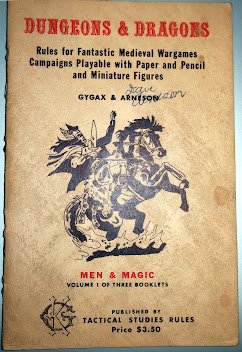 All of the classic Dungeons & Dragons Sword & Sorcery elements are in this film:

Harryhausen's work in "The Golden Voyage of Sinbad" is in top form but his work is never really over the top. The monster encounters fit the story of the film. Its never the other way around & the lost continent of Lemuria sequences are very enchanting. They also echo the best of the encounters in Dungeons & Dragons. 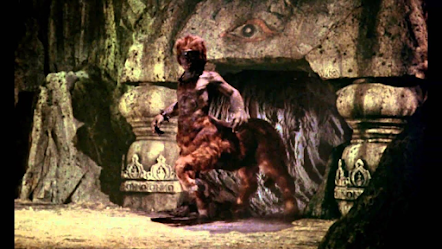 Dark magic here takes its full price as the 'demons of darkness' give their results but suck the life from Tom Baker as Prince Koura. And Tom Baker as Prince Koura steals every single scene that he's in. This is classic Tom Baker on tap & one of his best scene stealing peformances. But more then that Prince Koura is a villain with a hard domain stealing objective. Even though its not stated he's a perfect foil for a game of Adventurer, Conqeuror, King rpg. He's got the three 'M's that an NPC needs motive, magick, & madness in spades! 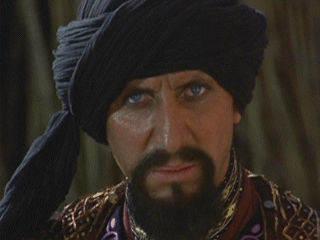 And the cast of characters  in "The Golden Voyage of Sinbad" are the perfect example of a Dungeons & Dragons party of adventurers. They don't meet in a tavern but instead have both the framing device of Sinbad ship & his destiny to use as a campaign frame up. 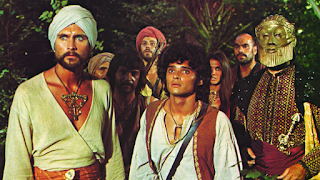 To me one of the best of the Sinbad series of films & a gem of Sevenities classic fantasy besides being a favorite in the Sinbad movies. Sure the entire film of 'The Golden Voyage of Sinbad' was born from the ashes of Western culture's Orientalism phase of history & adventure. But its a classic for reasons because at its core its one of the films that great campaigns are made from. "The Golden Voyage of Sinbad" ends but with the promise that just out of frame is the perfect opportunity for your own adventurers to take up the reigns of the 'grand adventure'. 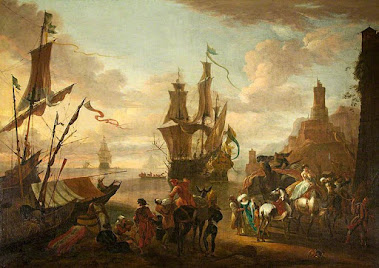