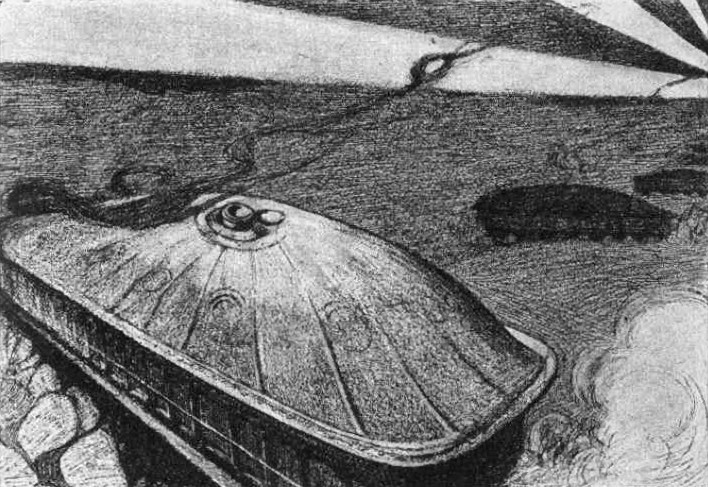 Dusting off the Land Iron Clads by HG Wells for this up coming game.

So we're dusting this blog entry off on Teleforce weapons for an upcoming Victorious rpg alternative history  campaign session. These weapons can be very dangerous to both the enemy & those wielding them. Gadgeteers making these weapons or doing research should consult the table below.

The Future today! These amazing weapons are helping our boys in the trenches against the Hun. Recovered from the bloodiest battles against the Martian Overlords in 1898  have become a staple on the battle fields of Europe.
The genius Nikola Tesla  recently reverse engineered these magnificent weapons for our boys to use across Europe. In his own words "Its a macroscopic charged particle beam projector. The device was based upon a large Van de Graaff generator of unique design and a special type of open-ended vacuum tube. It comprised a system for the acceleration of minutetungsten or mercury particles to a velocity of about 48 times the speed of sound. The projectiles were propelled out of the tube by electrostatic repulsion."

There are still some bugs to be worked out of the system but there getting used in many theaters across Europe! Now
This technology comes from a Near Earth Alternative where the Martian Invasion happened. These weapons are capable of  producing very great electrical force in the range of 60,000,000 volts to propel the particles to their objective.
The kink in the weapon is the generator that it must be attached to & the tremendous output of energy needed.
The man portable Teleforce weapon uses a a gas powered generator, back pack energy projector, & the hand focusing rod.


1d10 Random Teleforce Mishap Table
Teleforce weapons of this type may be built from space craft in 1d4 hours if the ship can be cannibalized. They may also be built from spare parts or built in 1d6 hours if parts are purchased on the open interstellar market. The cost is 50 credits per unit.  Engineer class characters or scientists will receive+1 to build these weapons but understand the weird science involved!
Posted by Needles at 2:36 PM