Evin had seen the sign for 'horns of power' carved into the trees nearly a dozen paces back in the treeline. The subhumans had been trailing him for the better part of four hours now. These cannibals belonged to the witch 'Tarari The Poisonous' but Evin wasn't impressed. Ajax had wronged her back two years ago & the cold Hells hath no fury but a witch's fury was the worst. The subhumans were supposed to kill Evin but they didn't know that Ajax the half caste warrior had flanked them.

'Well we've finally caught up with you Ajax!' the snarling response was the stuff of nightmares for lesser men. 'Evin' the name was dropped from the warrior's lips casually with a lazy Northern drawl.
'Wha?'The gang of subhuman outlaws were confused & not used to dealing with foul ups.
'My name is 'Evin' & you've been trailing me for two full days.'
"We have no quarrel with you then our mistress only wants the other warrior's head"  'That might be a problem then!'
That's when the subhuman warriors heard the twin sounds of Ajax's blunderbuss cocking & the gun becoming active. The subhuman's brain reacts fast & the words are out before he can think, 'Parley!?!'
'Good choice my friends' Ajax's words were cold as the flint in the weapon. 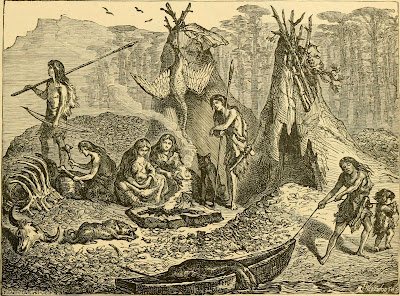 The game trails between worlds are often fraught danger & peril. Many times adventurers meet others who have strange or downright dangerous agendas. These beings often serve alien god like masters, seek dangerous treasure or even their own fortunes among the myriad realities. However they also pose some of the greatest dangers to others. These visitors from various Stone Age like cultures are some of the most dangerous opponents & NPC's that parties are likely to run across. 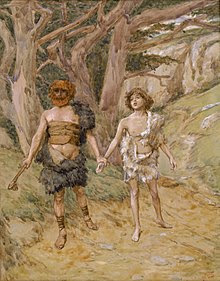 These NPC peoples  are advanced enough to have primitive horses or horse like creatures depending upon your home campaign.
1d12 Random Stone Age NPC  Encounters Table
Posted by Needles at 11:28 AM