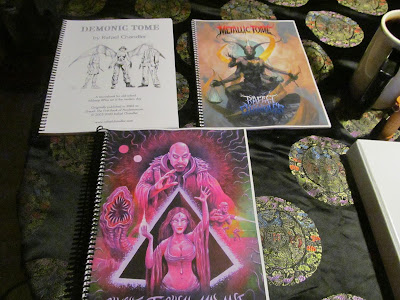 What's really happening in the War of the Outer Realm?! This was the question on everyone's mind last night during our game?! Today I contacted one of the other player's of our 'War of The Outer Realm' at the other end of the battle field near other end of the Grand Canyon. Here the player's PC's settled into working for an ancient Dragon king.  Our Dragon King dimensionally brought over  his ancient city along with his population & military. This was done  to take on & thwart some of the dimensional raiders taking full advantage of the 'Night Roads' into Earth. Our dragon king comes straight  from ACK's Heroic Handbook & Godbound. But there's a lot happening on the ground here that the PC's are not aware of. Our dragon king knows the truth about the dimensional vortex within the  the US military base built into the Isle Temple & Cancid's Caves.
There is no way in Hell he's letting the horrors beyond that gate take over his terrority or harm his people. Hence his employing the portal mage Godbound & his cohorts. The Dragon King is using the Dragon word & several of his children to  move across the countryside.  The Dragon King's children have been built using James Mishler's Dragonborn & the Godbound rules. The party has also run into a Godbound who was indebted to Orcus whose been raising an army of zombies from Utah's cities & deserts. His forces have tangled with the party several times & he's got the backing of the Cult of Orcus as well as the demon god himself. 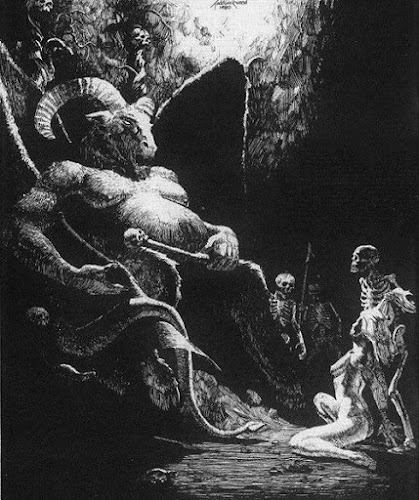 Near the California,Nevada, Utah, & Arizona deserts odd Cha'alt ruins, dungeons, & cityscapes have appeared. One of these has been my campaign's  version of Simon Forester's AX4: Ruined City of Cyfandir. This dungeon plugs nicely into Cha'alt's  Cha'alt: Fuchsia Malaise 's tattered & corrupt Elven empire.

The Cha'alt Elves & aliens that have settled into their Earthen digs have run into demonically possessed humans & worse horrors in California. There's been human/Elven malitias set up in several key California locations. There's reports of a strange god mecha that has completley destroyed several California towns North of Hollywood. The thing came out of a night road & lumbered in to disgenerate several towns without ryhme or reason. Details are sketchy at best..

The Mighty Servant has arisen..

Several of the Dragon king's employee's have gone to The Cosmic Kitten: the Strip Club at the End of Time for information they have yet to return! Big shout out to the Tales From The Thief of Whispers blog several months ago to use this location for my game campaign.