"Mining is a time-honored practice, its roots going back to the Stone Age. When humanity reached space, it began mining the asteroid bodies and extraterrestrial planets in pursuit of metal and ice. The most desired and profitable of these minerals are rare earths and radioactives. With asteroid mining, the Belter was born – a profession, and then a culture, of space miners. " 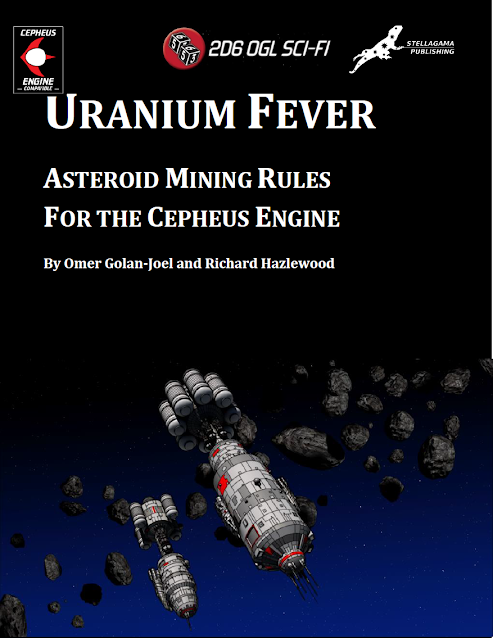 The company miner, working for corporation or government, works long shifts on interplanetary rocks for a steady salary and employment benefits. The independent belter, on the other hand, strikes out into the belt, prospecting, and mining with his own ship. Usually, he scrapes by on base metals and the more abundant rare earths. However, what sustains the belter through hard work and the loneliness of space is the lust for hitting a "motherlode" – good radioactive ore worth a fortune. As the 20th century song goes, this Uranium Fever infects the miner's heart and propels them into the unknown."

Its been a New York minute since we dived back into the deep end of 'These Stars Are Ours' setting . Do like asteroid mining & belt miner PC exploiting & having the guts to exploit the latest 'gold rush' then Uranium Fever  is the setting book for you! 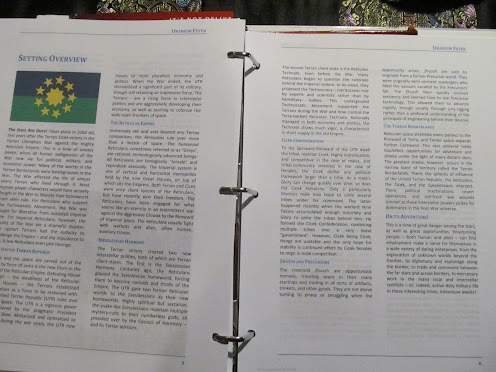 'Uranium Fever 'dives right into the 'New Gold Rush' of the Cepheus Engine rpg setting with asteroid mining done right. The problem here is that not only I'm I really far behind on this Traveller first edition retroclone but I'm super late to the party with a decent overview of this great setting book by authors/designers Omer Golan-Joel and Richard Hazlewood. 'Uranium Fever ' clocks in at about forty nine pages of dense settting material for the Cepheus Engine rpg. 'Uranium Fever ' gives the dungeon master everything they need for the PC's with incredibly detailed PC alternative classes,careers, new setting background material, mishaps, new ships, and lots more. This new gold rush is set within the 'These Stars Are Ours'  universe where the human subjects  & Grey ruled former intergalactic  empire has given way to a brand new 'gold rush' of asteroid mining & lots of it. There's profit in the space rocks & the PC's better get in on the action or get left behind. When the interstellar empire collapses what gets left in its wake with the humans & aliens is pure opportunity & profit.
'Uranium Fever ' clocks the hazards, lawlessness, & sheer insane danger that is inherit with in belt mining & takes it to its logical extremes here. The PC's could literally lose life & limb with little recourse. There's worse then pirates lurking here with the PC's going into the deep end of asteroid mining laying out interstellar laws, claims, ownerships, & much more. The ideas for adventure ooze off the page here from claim jumpers to blood fueds over claim or mine ownership. The whole of 'Uranium Fever 'feels like it sounds an 'asteroid Wild West' and everything that goes with it.

'Uranium Fever ' flips the play book on asteroid mining & adventuring by letting the PC's actually turn a profit in this one on one mini game of adventure & bare knuckles mining. This book takes the PC's deep into the world of mining from running an operation to a fully realized mining company. There are new ships, new equipment, new ideas, new ship hazards, & new mysteries all wrapped up with a nice & neat Cepheus Engine rpg bow. 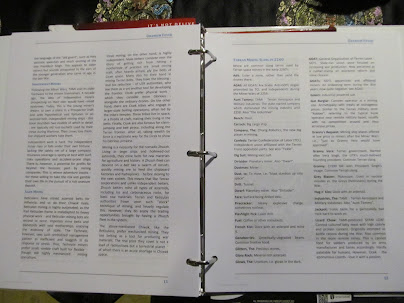 But is Uranium Fever any good?! Well having printed the fifty page book out & having read through it. There's lots of opportunity for adventurers & PC's to actually shine! This is a book rife with money for the taking but its damn dangerous work for only most ballsy and brave taking the asteroids for themselves. Corporations are dangerous as well wanting a piece of the action. But reading through  Uranium Fever  there are reminders of the classic Traveller tropes of what do adventurers do between missions. Running a belter operation is a great idea providing profit for adventurers whilst giving them material for creating their own star ships. There's plenty of opportunity here but there's also plenty for the dungeon master to exploit like the bastards that they are.

The writing is tight, the layout well done, the subject material very well covered, & by God there's more then enough here to convert it over to other OSR games. But 'Uranium Fever ' takes itself within itself & does it with a gusto that draws the reader in & makes you really want to adapt the book to its own campaign. And not only have I reviewed this book but it demanded that I print it out to exploit erm play 'Uranium Fever '  to draw in the player's PC's into the 'These Stars Are Ours' setting  universe. Its a tight, dangerous, & wel thought out setting book with all of the right ingrediants to make mining fun,profitable, & oh so limb losing prospects. One last thing this is one of my favorite books for the ships, equipment, & brand new toys for the Cepheus Engine rpg system.