Tog moved along the tree line with his five best warriors trailing after Myra & company.The witches had been avading his warriors now for three days. The winds had shifted 'mysterious' during the new moon & Tog wasn't having it. He used every trick in the book to track the 'ladies' (hags) across three swampland fields. He'd lost only one man too a strange bug leech creature. A holdover from the 'olden times' as his tribal elders called them. The monster was among the bevy of creatures called by these hags who disguised themselves with the skins of the young. He & his warriors had called down a blood feud on the crone women. He had his warriors kill one with a hook snare as she went for water unable to get off a spell.Or transform from her comely form into the monsterous thing of Hell.
That's when he heard the hollowering & howls! But there were no raiders in these woods?! He thought just as the first sub human broke through the trail! The Hags again! Their would be murder writ in their blood soon! 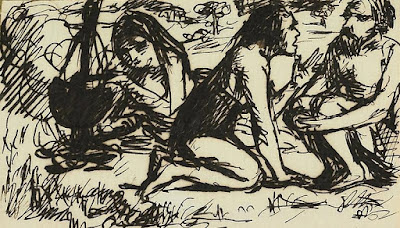 There are places that should not be travelled, game places that lead to other worlds & Hells undreamt of around the hunting fires. These places are home to outlaw tribes & cannibals that prey on the weak & the flesh of men. These raiders hunger for man flesh & want sacrifices for divine rites of horror & depravity. Adventurers & fools venture to these places for they are the prey of the warriors & degenerates that inhabit these spaces.
These stone age raiders are some of the most dangerous warriors that parties can come across. 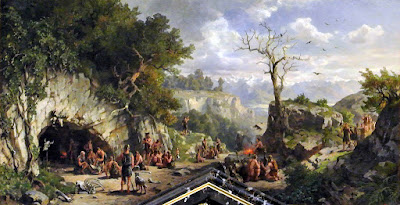 Note that there is a 20% chance of these raiders being accompanied by 1d8 camp followers who are actually deranged cannibal witches & torturers of the tribe. These 'beauties' will count as 1st level fighters.
There is a 30% chance that the tribe will be advanced enough to be riding horses or prehistoric 'Age of Mammals' horses or horse like creatures.
1d12 Random Stone Age Raiders Encounters Table
These raiders often target civilized or advanced cultures as victims because they love chaos & pure evil!
There is a forty percent chance of the tribe being lead by a black wizard or cleric of a Great Old One or figure of pure evil. 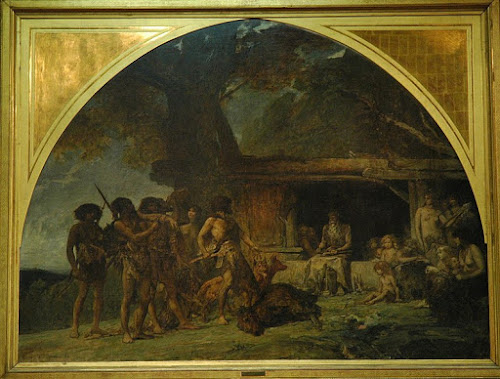