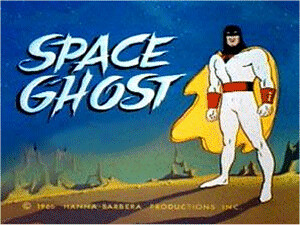 During the 60s Alex Toth created my childhood but it wasn't until the 70s when Hanna -Barbera began to be re-run on cable that it became wide available to wide eyed me.  Toth's work began in the American comic book industry, but is known for his animation designs for Hanna-Barbera throughout the 1960s and 1970s. His work included Super Friends, Space Ghost, The Herculoids, and Birdman. Those pretty much were the kick ass cartoon & Saturday morning line up for me on cable television when cable was a big deal in Connecticut.
Alex Toth was perhaps one of the greatest comic book artists who ever lived & drew both animation & comic books. His official site is here Alex Toth
The Space Ghost of Saturday morning cartoon fare was a mysterious figure of cosmic justice who battled interstellar criminals with style & flare seldom seen in a kids show. The animation was grade A & the cartoons fast, intense, with all of the style you came to expect from this quality of fare. 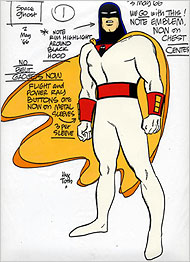 The original series debuted in 1966 where it shared time with an unrelated segment calledDino Boy in the Lost Valley. Space Ghost was voiced by Gary Owens along with Tim Matheson as the voice of Jace and Ginny Tyler voicing Jan. Don Messick also added his voice talent to Blip. (Previously, Matheson was the voice of "Jonny" in Jonny Quest, another Hanna Barbara adventure cartoon.) Space Ghost and his helpers fought such recurring supervillains as Moltar (voiced by Don Messick), Zorak (voiced by Don Messick), Black Widow (voiced by Ginny Tyler and also named the Spider Woman in one episode), Metallus (voiced by Ted Cassidy), Brak (voiced by Keye Luke), and Creature King (voiced by Vic Perrin).
He also has an impressive cast of recurring villains, Zorak, Moltar, Brak, Creature King, Web Woman (sometimes Spider Woman), Metallus, Lurker... There's even a storyline where all
his villains team up and form the "Council of Doom" to get even with him.
The original series comprised 42 Space Ghost and 18 Dino Boy episodes ending in 1968. 22 new Space Ghost segments appeared on Space Stars in 1981. The episodes introduced a new assortment of villains including an evil version of Space Ghost called Space Spectre who came from an alternate universe. His spaceship, the Phantom Cruiser, was also given a sleeker and more modernized look. As in the original series, Space Ghost often came to the aid of The Herculoids and vice versa. They also frequently crossed paths with the Teen Force, and it appeared that Jan and Teen Force member Kid Comet were dating as well. Gary Owens reprised his role as Space Ghost, but Tim Matheson was replaced by Steve J. Spears as the voice of Jace, Ginny Tyler was replaced by Alexandra Stewart as the voice of Jan, and Don Messick was replaced by Frank Welker as the vocal effects for Blip.
Personally I'll stick with the originals from the 60s but hey to each his or her own. Then in 2005 DC comics put out a limited comic book series of six issues with covers by Alex Ross. Preceding the comic was a lithograph that Mr. Ross had done for Warner Brothers.

MAJOR SPOILERS AHEAD FOR THE 2005 DC COMIC SERIES 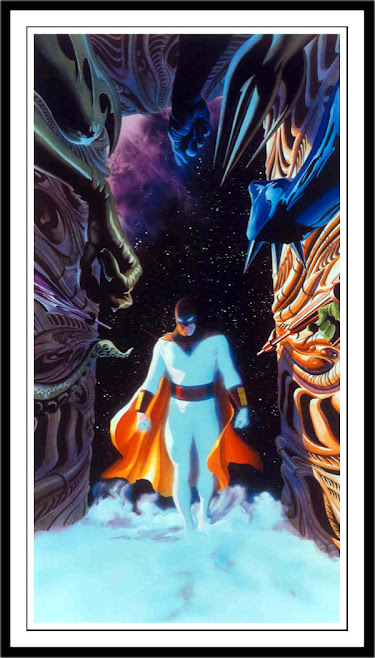 Thaddeus Bach was a promising Peacekeeper. He soon moved up to the ranks of Eidolon Elite. He caught the attention of Quartermaster Temple and was recruited into the Wraith. The Wraith was the embodiment of the Eidolon. Only the best of the best were able to join the Wraith. They take on the most dangerous missions that no one else is capable of. This concerned Thaddeus' pregnant wife, Elua Bach.
On a mission to meet a weapon dealers. Tower decided to kill him and take his weapons and money. Thaddeus had a severe problem with this. Even though the dealer was a bad alien, they had trials and procedure. Tower told him the Psi-judges aren't perfect and it's their jobs to punish those who are evil. He tells Thaddeus that all he needs from him is five cycles and then he could retire from the Wraith.
That night, while Elua is sleeping, Thaddeus wakes her and says they need to leave, now. Unfortunately, there were a couple Wraith members were in his home cloaked with invisibilty tech. He is knocked out from behind.
Later, Thaddeus wakes with Tower telling him how disappointed he was. He also finds out that his wife and unborn son were brutally killed. Thaddeus snaps and attacks them all. Out manned and out gunned, he he shot. Later, Tower announces that Officer Bach was killed in the line of duty along with his wife and unborn child. He is beaten some more and left to die on a ghost planet.
Thaddeus is saved by an alien named Solomon. After over a month, Solomon revealed to Thaddeus a secret he'd been keeping from him. He said he was only going to share it with him because he knew he was a good man. He tells him how he was born into war and also created weapons. It was the creation of those weapons that killed everyone on his planet while he hid in shame and cowardice. When Thaddeus sees a ship, he asks if it works. Solomon can see the lust for revenge in his eyes and pleads for him to not follow that path. Donning the power bands Solomon created and wearing a hood and cape, Space Ghost is born.
Powers 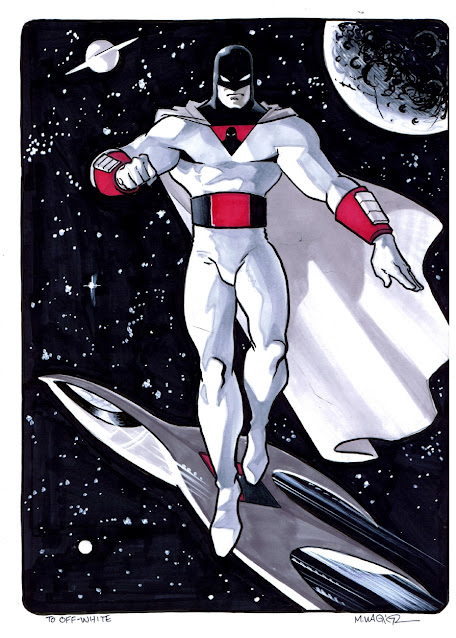 Space Ghost is a highly trained Peacekeeper(Adventurer 8th level). He has had extensive training in weapon use and hand-to-hand combat. He also has advanced alien technology, including his power bands(Psy weapon) that gives him an edge over those that oppose him. The power bands each have three buttons. Using them in different combinations, Space Ghost is able to deploy different types of blast power. The bands are capable of emitting stun rays, heat rays(Pryokinesis), freeze rays(Cryokinesis), and can even produce a force field(Invulnerably) to protect him. Space Ghost also has an Inviso-Belt(Invisibility & Phase) that members of the Wraith had used. When using the Inviso-Belt, he is able to phase through walls and objects. 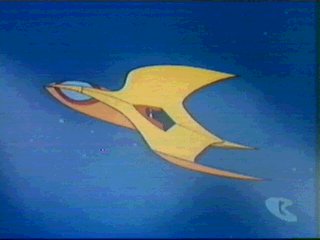 All artwork is copyrighted to its respective holders & since this a fan work no intent on copyright infringement is being made here.
Fan link here space_ghost Q&A
Space_Ghost Wiki