The Free 'The Master Mind of Mars' By Edgar Rice Burroughs From Amazing Stories Annual vol. 1, July 15, 1927. PDF A Retrospective For Your Old School Campaigns

On this date possibly one of the most important of the Barsoom books, The Master Mind of Mars debuted in Amazing Stories Annual appeared on news stands for .50 whole cents in 1927. The adventurers of Ulysses Paxton were far more accessible for me when I had completed the Barsoom novels. The publication of this book is perhaps as important to me as Robert Howard's Conan. The twisting path of the publication is pretty interesting according to Wiki : The Master Mind of Mars is an Edgar Rice Burroughs science fantasy novel, the sixth of his famous Barsoom series. Burroughs' working titles for the novel were A Weird Adventure on Mars and Vad Varo of Barsoom. It was first published in the magazine Amazing Stories Annual vol. 1, July 15, 1927. The first book edition was published by A. C. McClurg in March, 1928. 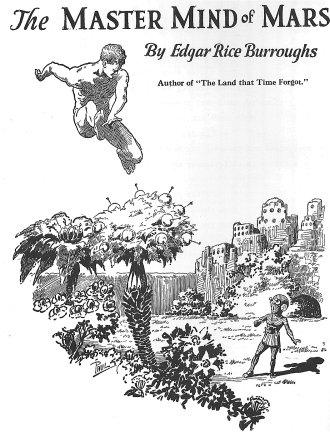 Burroughs had been unable to place the novel in his standard, higher-paying markets like the Munsey magazines and the Street & Smith line. Some critics have speculated the publishers were put off by its satirical treatment of religious fundamentalists. He eventually sold it to publisher Hugo Gernsback for $1,250—only a third of the rate paid by magazines like Argosy All-Story, where the previous book in the series had first appeared. Gernsback chose the novel's final title and made it the cover feature in his newest magazine.
"Edgar Rice Burroughs has written many interesting stories, but we believe, for downright originality and exciting interest, "The Master Mind of Mars" is hard to equal.  There is hardly a page that does not hold your interest.  Once the story gets under way, hair-raising episodes seem to tumble right over each other -- they come so quickly.
Besides this, the science is excellent and no matter how strangely the tale reads, it always, somehow or other, seems to have an element of truth in it."
"If you are a Burroughs fan -- and you probably are -- this new story by the well-known author will not fail to impress and stir you to the roots.  Here is another of his Martian stories, entirely new, packed chockful of adventure and excellent science.  In this theme, Burroughs has hit upon a new idea, which he exploits throughout the story in a truly masterful and expert manner. Nor is your interest allowed to lag for a single paragraph, for Edgar Rice Burroughs knows how to keep you guessing.  You will not rest easy until you have finished reading the story.  It is one of this favorite author's best."

Grab It For Free From Project Gutenberg Australia
Right Over HERE Note that The copyright for this story was not renewed by December 31, 1955 and therefore is in the public domain. 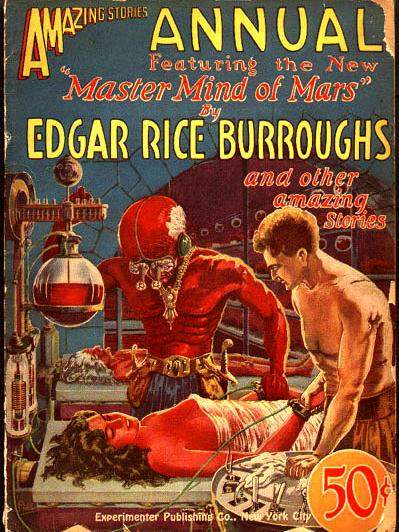 Numerous times I'd see the Amazing Annual #1 in science fiction encyclopedias, Famous Monsters of Filmland magazines, or some issue or other of Star Log.
My preference is for the older artwork and this edition of the book has numerous pieces of R.Paul's incredible artwork throughout it.  This was the book that made me an Edgar Rice Burroughs fanatic for the rest of my life and a life long Barsoom/Mars science fiction and fantasy nut.
The plot in case your wondering goes something like this according to wiki:
On Mars, Paxton is taken in by elderly mad scientist Ras Thavas, the "Master Mind" of the title, who educates him in the ways of Barsoom and bestows on him the Martian name Vad Varo. Ras has perfected techniques of transplanting brains, which he uses to provide rich elderly Martians with youthful new bodies for a profit. Distrustful of his fellow Martians, he trains Paxton as his assistant to perform the same operation on him. But Paxton has fallen in love with Valla Dia, one of Ras' young victims, whose body has been swapped for that of the hag Xaxa, Jeddara (empress) of the city-state of Phundahl. He refuses to operate on Ras until his mentor promises to restore her to her rightful body. A quest for that body ensues, in which Paxton is aided by others of Ras' experimental victims, and in the end he attains the hand of his Valla Dia, who in a happy plot twist  turns out to be a princess.

There are several factors that make this a fantastic OSR sword and planet resource, Ulyssses Paxton assembles a party of adventurers from the experimental dead of Ras Thavas's galleries, we get to see Barsoomian swordsmen, duelists, and an an assassin among the party, we get a half breed giant White Ape as a part of the party, numerous exotic and deadly Barsoomian locations teaming with adventures waiting to happen. 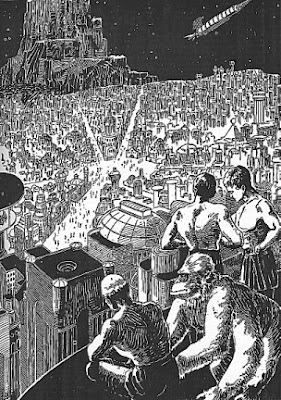 Several factors besides the great art and the assembling your party from the dead. Barsoom is on full showcase here, everything from the White Apes to the weird retro technological world of dying Barsoom are all there. Ras Thavas is the poster child for mad scientists, super scientists and doctors everywhere, by degrees he's one part saint and in the next couple of sentences he's talking about some experimental victim as if its the sports page. He's pragmatic and honorable but he's not the kind of character you can leave alone with the family science lab. He's appeared in numerous games of mine as an NPC and I have to say he's been a great character to play with. He also appeared in two other Burroughs novels as well, "Ras later resurfaces in the later novel Synthetic Men of Mars (1939), by which time he has transferred his base to the dead city of Morbus in the Toonolian Marshes. There he has been experimenting in growing monstrous synthetic human beings called hormads. The most intelligent of these turn on him and force him to grow an army of hormads with which to conquer Barsoom. They also force their captive to transplant their brains into the bodies of imprisoned normal Martians. Ras's chance to turn the tables comes when the earthman John Carter, Warlord of Mars and prince of Helium, seeks his surgical aid for his wife Dejah Thoris, injured in an accident. Imprisoned with Ras, Carter and his companion Vor Daj plot with him against the hormads." And then a further follow up in from The Synthetic Men of Mars with, one hormad, Ras's pupil Pew Mogel, is later revealed in "John Carter and the Giant of Mars" (1940) to have escaped from Morbus and established a new base in the dead city of Korvas, from which he continues to plot world conquest using the scientific skills he gleaned from his mentor. His scheme is defeated by John Carter." 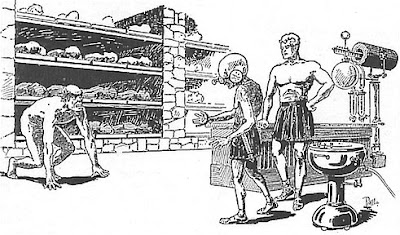 Throughout the plot of  'The Master Mind of Mars', there are certain D&D & AD&D touches that would later find themselves in certain adventures. Such as finding the trappings of an ancient Martian king within the inner workings and mechanisms of the great God Tur. Turism itself is a hollow religion whose mummery and rituals run through the narrative of  Mastermind. The hallow statue is classic.
The book ends on a classically happy ending 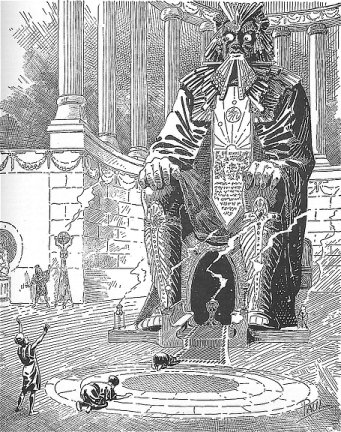 OSR Barsoomian Gaming
Resources
Grey Elf's Free OD&D pdf's includes
Dungeons and Dragons Warriors of Mars for the  Original Dungeons and Dragons and its retroclone systems  by 'Doc' from the OD&D forums, this is very different animal then the Warriors of the Red Planet retroclone rpg system.  The free pdf is listed under  'The Age of Conan' and 'Warriors of Mars' almost at the bottom on the site.  When we begin talking about OSR role playing on Barsoom then there are number of options on the table Tur itself got a big shout out in the expanded Petty Gods by  New Big Dragon Games Unlimited along with a good portion of the Barsoomian pantheon and world in one of its appendixes.
Other resources also include this thread from the OD&D Forums but note that several of the thread's links are down or gone. The Warriors of the Red Planet rpg system is a complete OSR rpg system and goes for around 16.00 US and is a complete rpg system into itself covering the entire red planet pantheon of Martian SF rpging. There are four classes in the game: Fighting-Man, Scoundrel, Mentalist, & Scientist Along with a very well thought out monster section  that includes a ton of Martian monsters many of which are drawn from ERB's works. The classes from the free D&D Warriors of Mars pdf includes Fighting Man, Berserker , Scout, Assassin, and Psion. The psychic powers include beast master, necromancer, mesmerist, and telepath. While there are more classes WofR seems a bit more expansive to include more then simply Edgar Rice Burroughs works but also includes many of the the later science fantasy efforts and novels by other writers enabling wider range of OSR adventures. Warriors of Mars is much more narrowly focused on the ERB material
Posted by Needles at 10:17 PM