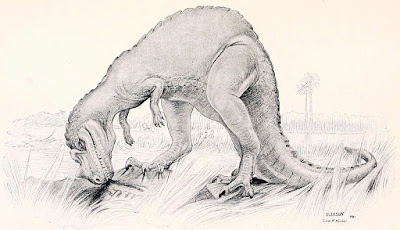 The Babblers of Neo England, are an imported species of psychological and biological weapon systems loosened by the Reptilian slavers who work for the Voltamen
in Neo England. They are mutated Reptilians drawn from their failed colony worlds from the Outer worlds. Usually appearing in clutches of 1d4 individuals, these things prey on live stock, humans, and any near humans they can find. In Neo England these horrors have the characteristics of  mammals,humans, & alien reptiles. The females of the species are larger to the males and are able to blend into the Neo England Swamps with easy. They are also the leaders of the clutches of these monsters.  Swamps and woodlands of Neo England present little problem for these monsters.
Normal move rate is (12"rate) slither on its stomach in the fetid swamp waters  but it must stand erect to attack and movement is reduced to 6". The Neo England species has tongue attack which is barbed and glued with a slightly acidic strong smelling stomach bile. It is +3 to strike and only does 1d4 points of damage. The prey is reeled into the creature's claw range for 1-6 points of damage each and a horrible bite in its shark like toothed mouth for  1-8 points of damage.

There is only a 25% chance of detecting the creature as it slithers up to its prey  but some animals and mutants with will smell the monster at some distance away. It can strike from behind as a fourth level thief doing double damage and gaining the bonus of  +4 on its 'to hit roll' as it attacks normally.

These are highly mutated and modified Reptilians, they retain all of the intelligence and cunning of these alien humanoids. They love the taste of human and mammal flesh;these monsters have been imported into the local time space continuum from Accursed Atlantis where they were extensively used against the local armies in some of the salt mash lands surrounding the ancient wastelands. They are particularly hated by the local warlords of the swamplands, their incomprehensible babbling language has led to a bounty of 3,000 gold pieces on the heads of these creatures. Murders and assassination in the Accursed Atlantis swamplands.
In the temperate swamps of Neo England these bastard creatures often come in the night to murder and slaughter families, live stock, and lead Reptilian warriors on raids of  local farming communities. They're low light and dark vision enables them to navigate the murky swamps and wetlands of Neo England  with easy making murders  and disappearances among the native Neo Englanders a fact of life.
Posted by Needles at 10:16 AM