The White Star rpg has been based on the Swords and Wizardry engine pretty much catters to the pulp and Star Wars style space opera genre. It also has one of the most active and passionate  fan bases imaginable pumping out incredible content for the game as fast as possible. But much of the OSR material for the game has centered around this style of space opera and Star Trek style adventuring has been lacking. And yes there are a number of OSR products and retroclone that meet that need. This isn't what Five Year Mission by Kirt A. Dankmyer is, instead this is an add on tool kit support system for adding in federation style star ships casts and crew to your White Star Games. But Kirt this isn't a complete product, its a product that has some development and the designer/writer wants to share it with you! And at .70 cents can you go wrong? 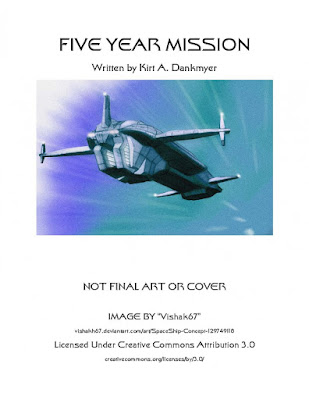 Grab It Right Over
HERE
Five Year Mission adds in tongue and cheek elements to the game in Kirt's solid writing style and it adds in a whole other dimension to your White Star games. This book adds in all of the usual suspects from Trek to your White Star Games. Think about that all of the usual suspects are now dropped straight into your Space Opera games of White Star. Here's the offical word from Ivanhoe Unlimited:
BUT it will transform into the final product! As more is added, the price will go up! But you'll get the updated version, free of charge!
What is it about? It's a supplement for White Star with a sort of Star Trek theme.
Right now, it contains:

But let's take this a step further, have you ever wondered about those away missions that have gone wrong during those five years out in the middle of unexplored space? What would happen if some Star Wars style adventurers ran smack into the midst of this business? Well now you can and at .70's cents its easy to get into the back end of the action. Most of the material here is well done and plays out someplace between the original Star Trek series and Next Generation with a combination of the two possible and easily done. Now there are tons of Star Trek expanded universe material out there to use. What Five Year Mission does is saves you half of the head ache of searching for it and hunting through tons of books to locate facts and figures. Five Year Mission isn't complete but its a damn fine start to a promising book that could add a ton of material to the White Star Universe for Old School play. Personally I would get in on the ground floor cheaply and then as things build you the old school DM is ahead of the curve.
There are several other possible uses for Five Year Mission easily right out of the gate. It could be used to emulate those dirty and dangerous failed colonies we used to hear about on Star Trek in both the original series and the Next Generation. Combined with elements already in  White Star this book could simulate a post apocalyptic world or colony. Used to get PC's right smack into the middle of dangerous situations in the wastelands. This book could be used with elements of Swords and Wizardry  added in to simulate elements of science fantasy or monsters who have become mutational horrors reminiscent of some the classic D&D or AD&D modules such as Expedition to the Barrier Peaks. And you've got the makings of a complete campaign for years to come. The possibilities here are endless and its only .70 cents right now. Personally I can see a myriad of uses for this product and as a Star Trek fan this is a welcome addition to the growing White Star universe and family of products