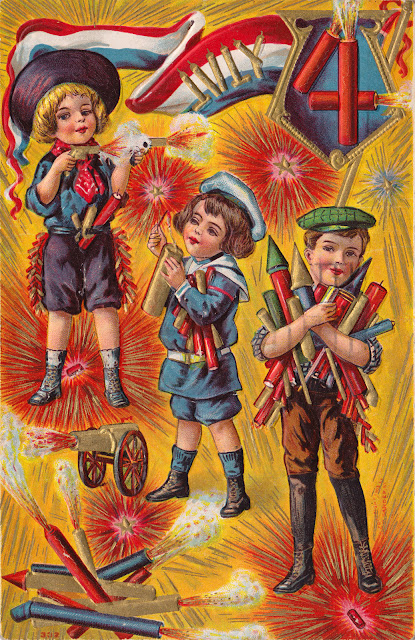 Some of the most hated monsters from Fairyland who  appear around the Fourth of July are the Fire cracker goblins, these monsters have the glamor guise of charming  childlike humanoids dressed in Nineteenth Century children's garb or costumes. These little horrors want to cause the maximum amount of carnage and chaos, they often tempt others to do their dirty work for them. Maiming and murder are two these goblin species favorite games
They have the ability to produce a seemingly endless array of fireworks, fire crackers, rockets, and roman candles up to seven times per day from behind their backs. These little twisted bastards may charm person up to three times per day, this is often used to create accomplices to their fiendish activities. They often tempt small children and teens into helping them in their wanton acts of destruction. They leave at the first sign of trouble. 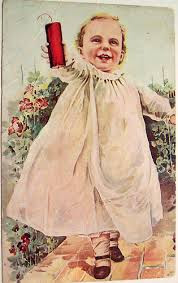 There is something not quite right about these creatures and they have a pyromaniac's gleam in their eyes. They also have the ability affect normal fires, produce flame, fairy lights, create fire balls, and cause a delayed fire ball reaction within their fire works. 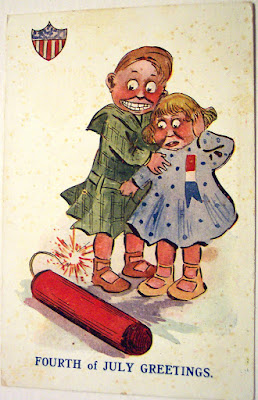 Fire Cracker Goblins are drawn to events of celebration and good cheer, they prone to mayhem, murder, and merriment. They also moonlight as saboteurs, assassins, and  fifth column operators for hire. They will work for the promise of blood shed and horror. They're true face reveals the dark twisted underpinnings of their existences. As Fire Cracker Goblins drop their guise and rough, twisted, faces of not quite finished beings of evil are revealed. Those who these beings as they truly will be subject to fear as per the spell.
These goblins are known to torment and torture animals and family pets taking great delight in cats and dogs especially, so much so that some communities have standing bounties of  fifty or more gold pieces per goblin corpse. Fire Cracker goblins are well hated by fey kind, who regard these beings as terrorists and the worst examples of Fey kind to grace the unreality of fairyland itself. 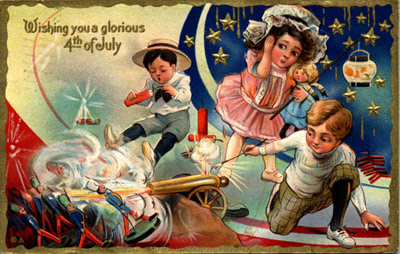 Due to the dark and evil outlook of these pint sized little horrors fire cracker goblins have found employment with wizards, wasteland warlords, and other monsters as mid tier agents and guardians. They're brand of murder and mayhem works very effectively in certain twisted dungeons and ruins where the firecracker goblin's talents are appreciated and encouraged. They're true calling is for the July Fourth holiday when the explosions and merriment of the wasteland communities draws these horrors in by the score. Many adventurers play cat and mouse games with these twisted Fey only to lose as these twisted bastards draw the adventurers into traps where these monsters operate with impunity. 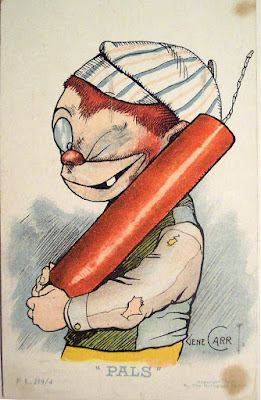