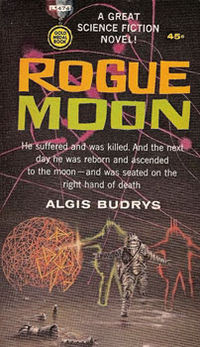 Take your favorite fun house dungeon or adventure location and make it a nefarious alien artifact out of it, this concept isn't new at all. In fact back in the heyday of the Fantastic Four in 1961, Rogue Moon by Algis Budrys debuted. This took the concept of Jame Raggi's Negadungeon  and refines it into a different class all its own. According to Wiki: "Rogue Moon is largely about the discovery and investigation of a large alien artifact found on the surface of the Moon. The object eventually kills its explorers in various ways—more specifically, investigators "die in their effort to penetrate an alien-built labyrinth where one wrong turn means instant death", but their deaths slowly reveal the funhouse-like course humans must take in moving through it"

Those who enter the alien artifact either are killed or go insane. This is all done by matter transmission of a special type, the adventurer is on Earth safe and sound in a sensory deprivation tank  while his doppelganger is transmitted to the moon and to the artifact. The explorer of the maze is in second hand contact with his doppelganger on the moon exploring the artifact. This is the 1960's and at the height of the Cold War so this is a military project. According to Wiki :
"Dr. Edward Hawks runs a top-secret project for the U.S. Navy, using the facilities of Continental Electronics to investigate a large, deadly alien artifact found on the Moon. Volunteers enter and explore it, but are inevitably killed for violating the unknown alien rules in force within the structure. Hawks "must continue to send duplicates into the artifact, however, because each one moves a little closer to finding a way through the alien labyrinth" " But our hero is the flawed and very dangerous thrill seeker who is manipulated into joining the project by Clair Pack
"Al Barker, an adventurer and thrill-seeker. Hawks also meets Claire Pack, a sociopath of a different kind. Where Connington covets power, and Barker seems to love death, Claire enjoys using sex, or the prospect of sex, to manipulate men. Connington wants her, but she stays with Barker because he has no weaknesses in her eyes. Hawks has to appeal to Barker's dark side to persuade him to join the project. Claire tries to get under Hawks' skin while simultaneously playing Connington off against Barker."

And what about the alien artifact or  object itself? Its only talked about through the narrative of the protagonists exploring, dying, and continuing with the exploration of the artifact. Once again wiki:
The reader is told about the artifact only through dialogue, which adds to the mystery. Hawks describes it to Barker:


There's only one entrance into the thing... it is a place where the nature of this formation permits entrance by a human being, either by design or accident. It cannot be explained in more precise terms, and it can't be encompassed by the eye or, we suspect, the human brain... Other men have died to tell us the following things about its interior: "A man inside it can be seen, very dimly, if we know where to look. No one knows, except in the most incoherent terms, what he sees. No one has ever come out; no one has ever been able to find an exit; the entrance cannot be used for that purpose. Nonliving matter, such as a photograph or a corpse, can be passed out from inside. But the act of passing it out is invariably fatal to the man doing it..." (Chapter 5)

This isn't a hard book to get through the but the characters are very,very, flawed and broken in various ways having many of the qualities that allow them to continue the exploration of the artifact as they die in the process to bring the data back to Continental Electronics. I've thought of Rogue Moon over the years as the anti 2001, the explorers enter the artifact and deal with its puzzles and deadliness in various ways. This isn't an easy book to get through at all but well worth the trip and that trip is the key to the whole thing. During the 1960's the themes of transcendence, evolution, and the thrill of the journey. Kinda horrific in a way and very interesting, but throughout the book, the adventurers are playing no only with the alien artifact but with themselves. Case in point is this little tid bit from Jeff King that Wiki sights:
A reviewer for SFF World disagreed with Jeff King, considering the novel to be about death or dying; he referred to Arthur C. Clarke when he opined, "Rogue Moon seems to be initially a great exploration puzzle, about a large alien artefact found on the surface of the Moon. All attempts to explore it leads to the intrepid explorers being killed or going insane in various ways, but their deaths slowly reveal that the process of dying is the point: that and by dying in various ways by moving through it humans learn something about themselves, as presumably would the aliens, should they still exist. It is a Clarkean test, an ordeal that humans must pass in order to evolve and develop beyond their present state. As this shows, Rogue Moon is a deeper and more complex novel than we expect at first."
A more contemporary series of films that goes down similar but not quite the same territory are the Cube films. Strangers find themselves trapped within a negadungeon and one by one 'Ten Little Indian style' their picked off.


Now you might be thinking to yourselves what sort of sick and twisted mind would use such a means of starting a basic adventure party and level them up over and over again. My answer would be very simply I'm  a dungeon master. Well, believe it or not I've used this method in the past with Gamma World 1st and 2nd edition as well as with Metamorphosis Alpha 1st edition as a right of  passage. And now with the release of Mutant Crawl Classics it seems that the Negadungeon or funnel depending upon how you look at it will be getting a second breath of life again. This same method is one which I employed whist DMing Stars Without Number and Lamentations of the Flame Princess. 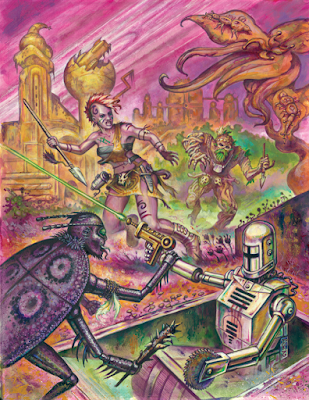 But what kind of mind might have discovered such a relic? Much less conceive of using this sort of artifact for testing on human subjects? No less in my campaigns as the head of the Fantastic Four himself, Dr.Reed Richards!
Richards and the FF have always had dealings with the dangerous areas of the Blue Area of the Moon. This is the same Dr.Richards who subject himself and his friends to cosmic rays and has used very risky dimensional travel technology including exploitation of the Negative Zone, and had dealings with the Watcher & the monoliths from 2001 a Space Odyssey. This is of course fan speculation but Earth's moon in fiction has been busier then Grand Central station and the point here is that since this is mere speculation and that the FF made its debut a year earlier then Rogue Moon there has always been a connection between the two. Is it possible that the artifact maze from Rogue Moon might in fact be another type of artifact along the lines of the monolith? Possibly there are some on the surface similarities. Both artifacts use unique energy and matter technology in there operation. There are the various mind blowing or expanding experiences used during their operations one through a cosmic trip and the other through the use of alien death traps, their agendas are completely alien, and their alien masters are unknown. This leaves in my mind more questions then answers. In the end Rogue Moon by Algis Budrys remains an old favorite and is somewhat unknown to the general population of both new and old school role players.

All properties and rpg systems discussed in this article remain the trademark and copyright of their respective owners, this article is the speculation and opinions  of the author and used for educational and entertainment purposes only.
Posted by Needles at 6:53 AM