Holy crap when I asked for and got Dark Albion I wasn't expecting the breath and scope of this sprawling setting book that you can easily get lost in. I received the review pdf  copy of  The Dark Albion Setting Book By Rpg Pundit & Dominique Crouzet this morning. I've been devouring it ever since, imagine if the War of Roses was being fought in a low magic but heroic world of witchcraft, sorcery, warfare  and violence in the middle of one of the more complicated periods of English history. This is not our world. Not at all, your looking at a dark fantasy  lens of our own history twisted by the authors into an alternative OSR setting.
Dark Albion is a sprawling two hundred and eight five page pdf  book for any new school, old school, or retroclone rpg  system. Everything about this book speaks volumes of it's  alternative world “War of The Roses” setting. The pdf is incredibly expansive, we’re clocking in at two hundred eight five pages of wall to wall artwork and 15th century dark fantasy setting. The pdf includes some very impressive maps of London, the British Isles of the 1500’s, a fully realized setting book that smacks of a dark fantasy campaign setting  seen through an Old English lens, and with heaps of  history, background, and much  more.  The setting goes into details about its own world right out of the gate. This isn't D&D as you might know it. Instead this is a pseudo historical setting abiding along its own rules and mores. Society is front  and center with changes spelled right out in the introduction chapter with headings like : the level range is low, social status is extremely important,the role of women, the church of the unconquered Sun, chaos cults & heresy, the non human is hostile and dangerous, the monstrous is found in lonely places, and differences between our world and our historical world. This is all laid out in a common sense fashion easy to read and it defines itself by its own standards. This book is wall to wall artwork, while much of it is public domain but here its used to great effect! The layout is very well done by Domique Crouzet and company. The text easy on the eyes on the flow of the product is easy to follow.
Grab the Dark Albion pdf  Right Over  HERE 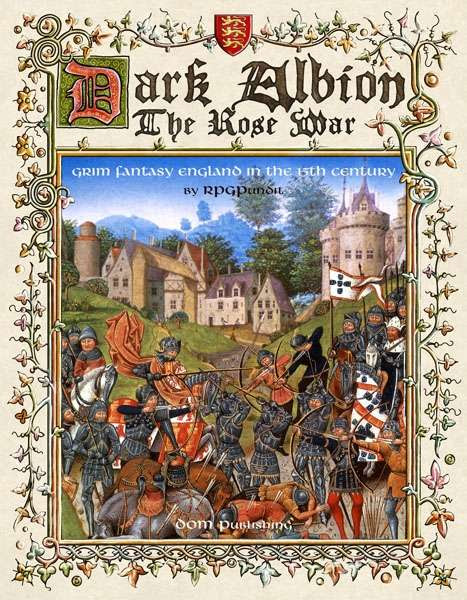