The Massive OSR Resource Petty Gods Is Out! 'Let your adventurers beware and tremble at the divine might in your old school campaigns'

Petty Gods is one of those source books that entire campaigns can be built around. This thing is incredible, its wall to wall awesomeness that can be used and plugged into numerous OSR applications. The material here is top drawer and possibly one of the best books I've seen in while. This was so worth the wait! 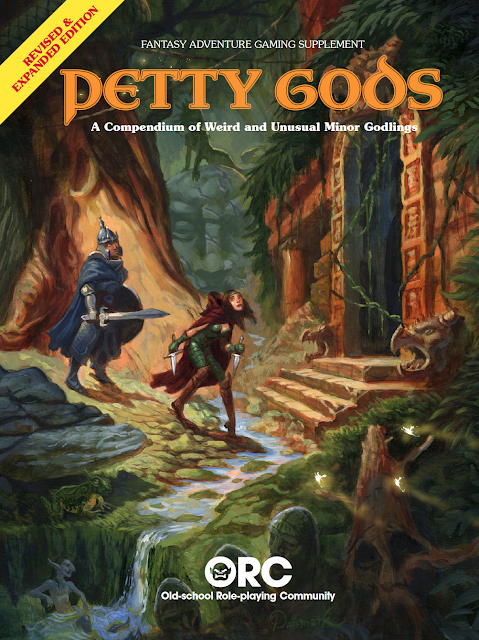 Well, its finally hit the stands, one of the projects I'm most excited to have been a part of is now out! I've checked it out Greg Gorgon and Richard Leblanc did a bang up job on the layout, design, and every little part of this one. This thing rocks hard and its got some incredible authors and designers who were a part of this. According to Greg Gorgonmilk:

At a monolithic near-400 pages, this community project is the largest collection of divine beings ever assembled. Featuring the talents of

Links and pricing via Richard LeBlanc, PG's editor-in-chief and a major contributor to this work:

[Note that the RPGNow page will say "Watermarked PDF" on the page for the item, but when it downloads, there will be no watermark.]
My little mini pantheon "the  Mearra" appears in this book with art by Scott Faulkner  and now my name appears along with so many other writers and TSR alumni. And its really a dream come true!