The Mystic Ancestor Mammoth For Your Old School Campaigns


Mystic ancestor trumpeting call echoes across Hyperborea and into your old school campaign!

Deep in the ancient Hyperborean lands and mountains are  noble creatures who are mystically  bonded with the tribesmen and warrior clans they call family. Beings  that watch over the grave yards of both their ancient linage and are coming back to the world of man once again. The mystic ancestor mammoths are creatures of more noble bearing and have about them an aura of power and majesty. These creatures have bloodlines stretching back to the days of ancient Atlantis and had their very souls uplifted to watch over their species.
These being's spirit reflections choose noble warriors from nearby tribes of hill people, Norsemen, and other warriors. They are often the guardians of great herds of mammoths whose  movements, lives, and life cycles are tied into the very existence of  tribal life around them. 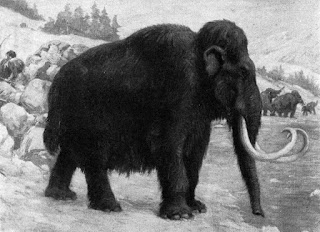 These creatures stand some seventeen feet at shoulder and while they lack the ferocity and raw rage  of the Woolly Mammoth Superior (see page 65 of the Referee book of AS&SH) the mystic ancestors act as rulers and guardians in the stead of these creatures of raw nature. They seek out their chosen tribes in times of war, and of great significance when the herds of mammoth that the very lives of these tribesmen depend upon are threatened.  They are the enemies of Chaos and evil watching over the Mammoth graveyard lest the necromancers of Xanthoqqua corrupt the bones of their ancestors and animate them as war beasts. The gods of the Mammoth warriors look upon such heresy with disdain and violence.

These noble creatures lead great herds of mammoths through the dream time as well as the world of the waking upon Hyperborea and are accompanied by their owner/companions. These are sometimes whole family lines stretching back into eternity. The one weakness of these creatures is the rate of birth for such creatures is very few, only one or two are born every few years.
Once per day the mystic ancestor can trumpet and cause fear in all within a 100 foot radius three times per day. Those of the tribes that these creatures watch over are immune to this ability.
These creatures have the berserk ability common to other mammoths but they are far more dangerous gaining a +3 to hit and +3 to damage but will not attack their human masters because of the mystic bond. Mystic ancestors have morale of twelve should any member of their family unit be harmed.They will pursue and trample such individuals.

Those who under go thirty hour  the rites and rituals associated with these creatures gain +3 to their strength and constitution as well as a +2 on their wisdom. But they also gain the outlook and insights of the mystic ancestors. They will be plagued by dreams, visions, and nightmares of  past herds. The owner must roll their wisdom during times of anger to keep their rage and temper in check. The ancestors will bond with shamans, warriors, fighters, and rangers but never ever with berserkers. The warrior spirits of  berserkers are things of extreme violence,war, and insanity. And while they have their place it is not within the minds of mystic ancestors.
Those bonded with these noble creatures gain the wisdom and insight of these beings but also gain an incredibly stubborn resilience in their outlook on life as well as gaining 1d30+2  plus years to their lives. Those bonded also have a brooding and abiding anger about them. They are often welcome into their tribes but ultimately looked upon with a bit of disdain by their tribes preferring the company of the mammoths to friends. Family however sometimes share this same outlook. Those warriors who bond with mystic ancestors have telepathic bonds that stretch over several life times. Should a mystic ancestor be killed the companion will take 1d4 points of damage and sink into a deep depression. There is only a 10% chance of them recovering from such a loss. Shamans may help them through such a rite of recover but there is only a 5% chance of this happening. Some bonded warriors are broken and never right again.
Shamans must sometimes tend their spirits in the afterlife and consult those who pass on to the spirit herds for guidance and advise as they ease their passage among the grasses. Those warriors who are bonded with the mystic ancestors gain +2 on all tracking as their sense of smell gains a near supernatural edge. They may once per every two days go without food or water over great distances for purposes of combat and travel. This ability burns their bodies up with the mystic energies of their companions and both must rest afterward.
Mystic ancestors loath and hate things of the Abyss, they gain a +3 when fighting such beings and their true power will be revealed. They will fight to destroy such threats to tribe and reality. The ancestor will not stop until every last bit of such a horror is obliterated from the face of a field of battle.