The Supreme Mind is a seventh tier cybernetic demonic entity created by late twenty fifth century super science technologies after the copying of the mind patterns of one of the most dangerous warlords and dictators of the Lost World era. This was done by one of the robotic gods of the era, the Supreme Mind itself vows that it was once a living god, a prince among men. It is he that supplies X-33 units to various minor wasteland warlords and Voltamen forces. It amuses the horror greatly as it plays with human lives as chess pieces upon the board of life. The Supreme Mind is a great source of high tech and super science weapons for the Voltamen as well. This monstrous entity has been woven into the same advanced demonic super sorcery and science. The Supreme Mind has manufactured itself at least a dozen times over and chosen high ranking enemies which it has defeated and grafted with  magicktech cybernetic systems and overlaid its own twisted and demonic mind as well as essence onto those it has defeated.
The Supreme Mind rules a network of minor underground city states and it tries to keep the yoke of rulership upon the various populations of Neo England on the north coast of Merica itself. 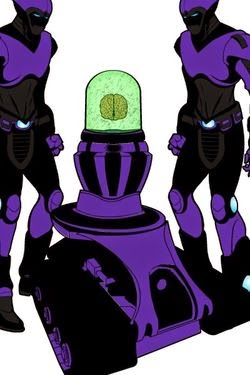 There is speculation that the Supreme Mind's systems have been melted with a type IV demonic entity or entities. It is a gifted psychic and psionic possessing telepathic and telekinetic abilities of 5th rank or higher in addition to being able to Create Illusion, Cause Fear, Levitate, Detect Magic, Read Languages, Know Device or Technology, Dispel magic, Control Technology  in addition to using its high technological abilities and equipment once per round. Many of the demonic abilities have been suppressed or completely lost due to the advance demonic super sorcery. The Supreme Mind is capable of taking control of any of its creations or seeing through the eyes of its products at anytime regardless of distance. There is a weird psudeo supernatural ability about it and a creepy ice cold air hangs in the area when it employs this ability.  Those fight the Supreme Mind claim that it smells of death, rubber, ozone, and that an air of damnation hangs around it.
In addition the Supreme Mind Units are fitted with several specialized weapon systems. These include a stunner array which deals 2d8 every three increments and has a range of twenty feet and ammo for 15 shots. In addition the Mind is also armed with two heavy tendrils capable of cutting bone,flesh, and steel with easy, these do 2d6+4 to anything caught in melee range.  The horror thing also has two blaster pistols with a 100 foot range doing 2d8 points of damage capable of firing twice per increment.  The Supreme Mind is served by his brain bots which are the implanted brains of his minor enemies and warriors striped of all morals and given the destructive essence of demonic warriors. In addition they have the abilities of at least a forth level assassin or higher and are fitted with a wide variety of high tech weaponry. They have the demonic ability to cause a cloud of cloying darkness in a fifteen foot radius per round. They often use other super science and sorcery weaponry.  The worse of which is a super science energy sword capable of dealing 3d6 +2 damage per strike. The soul of the victim is absorbed by the brain bot and shunted back to the howling planes of the Abyss for enslavement and torture.  Brain bots are called such because of the mind of the warrior is often visible just before the kill is made a minor way that the Supreme Mind let's its victims know who is responsible for their demise or enslavement. Brain bots are often used for kidnappings, assassinations, and other duties such as over seeing the Supreme Mind's projects or installations. The Mind bots often seem to have an smell of frustrated violence, horror, dried blood and mint about them. This all but disappears when the engage in the violence they so love.
There are rumors that the Supreme Mind itself serves another far more dangerous and deadly cybernetic god. Those who have observed the Supreme Mind and its minions who have lived to tell the tail speak of  it utter frustration and incredible psychotic behave on its victims as if its striking out against an invisible yoke. But it seems be searching the coast of Neo England for something as it goes about the business of ruling, controlling and expanding its influence.

The characters of the Supreme Mind & his Brain Bots are available for use by anyone, with only one condition: This paragraph must be included in any publication involving the Supreme Mind & his Brain Bots, in order that others may use this property as they wish. All rights reversed. The displayed image has been declared public domain to give creators a starting point.
Posted by Needles at 8:39 AM