Murderbots For Your Old School Campaigns 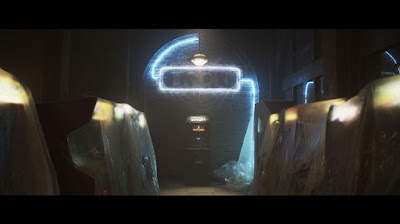 Could this arcade warehouse  be the resting place for a murderbot? 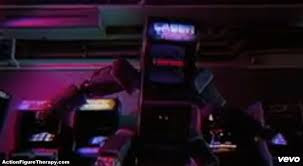 Sent across time and space by the Kung Fuhrer, these horrid transforming murderous robots pose as mild mannered arcade games. These things can be found in the post apocalyptic wastelands, alternative timelines, dusty arcades of the past, in corners of restaurants and pizza joints in some space ports, & even in the ruins of the deepest mega dungeons. The barely restrained violence of these machines is fueled by a murderous A.I. whose appetite for destruction is held in check by a constant flood of quarters, credits, and gold pieces.
Murderbots once per round may create a pleasing pattern of eye catching graphics and pixels that acts as a charm spell, targets must save vs wands or be lulled into trace like state. They will be compelled to keep playing the fiendish game until all of their savings are gone. There is 60% that a post hypnotic suggestion will compel the target to return as soon as possible to repeat the experience. Any violence or swearing against the stand up arcade game has a 50% chance of awakening the transforming robotic horror! Murderbots transform into their battle forms with 1 turn. They sprout arms, legs, and faces upon their screens with expressions of pixeled hatred and rage. 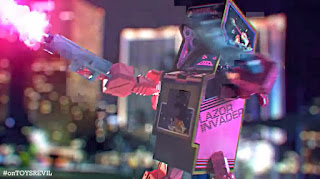 There is a 30%  of the murderbot having a unique or signature weapon often reflecting the 'theme' of its game.  Most often this will be a built in machine gun system built into the forearms of the bot and capable of doing 3d6 +2 points of damage per shot with a range of 200 feet. But there is 20% chance of the bot having an 'upgrade' to a laser weapon capable of 4d6+3 damage with a range of 300 feet. 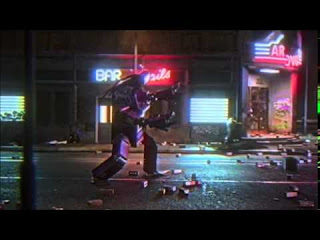 Each time the bot is engaged in combat there is a 20% chance of it going completely berserk attacking at random anyone within range. They are terrifyingly strong and capable of smashing through ordinary doors like tin foil for example it will smash through a convenience store locked reinforced door within 5-8 melee rounds. It does 1 point of structure damage to modern doors every 3 rounds. All this power comes with a price within 10 rounds a quarter, gold piece, or other monetary coin amount must be placed within the coin slot built into the bot or it will lose its weapon systems. These beings are completely immune to all illusions and mind affecting spells but they are vulnerable to light spells in their optic sensors. This will disorient the murderbot for 1d4 rounds. Because of the violent nature of these psychotic machines they cause fear in all creatures less then four hit points. All normal construct and golem strengths apply to the murderbot. Electrical attacks such as lightning and magical electricity restores the murderbot in direct relation to the number of  dice damage the murder bot has sustained. This is a result of the twisted Nazi super science of the Kung Fuhrer.
Murderbots also spy and gather information in dens of inequity and depravity such as smoke filled taverns, bars, and other locations where the forces of 'good' come to unwind. They act as spies reporting back to their masters to unload vital information. These arcade themed horrors are smart enough to often move and will depart immediately if discovered after having murdered their discoverer.
Note that this is no way an attempt to violate the copyright or trade mark of the makers of the awesome Kung Fury.  This is just my homage for the awesomeness that is this film for use in your old school campaigns. Inspired by Wisdom from the Wastelands Issue #15: Robots Part 1 for some of the murderbot's systems.
Posted by Needles at 10:36 PM