The King Of The Undead For Your Old School Campaigns

Any adventurers braving the under city in the city state of  Old Boston may face the hordes of the night, those vile minions of the undead. These horrors are under the control of the so Called King of The Undead.

Working from within the under-city beneath the city state of Boston, the King of The Undead is strange and seemingly mutated lich of the highest order whose uses a combination of necrotic super science and sorcery to turn his victims into part of his army of undead horrors. The King of The Undead is a wizard of at least 10th level and super scientist of 7th whose base of power sits above a pit of seething and roiling occult chaotic energy and weird blue other worldly flames. His victims are killed by special super science poisons and the bodies are dumped into "an underground pit filled with sulfurous smoke and a strange flickering blue flame". The victims emerge from the pit as desiccated wights under the King's control. He can mentally direct up to 1d8 of these things at once. They are very cunning, of low intelligence, and very strong as well as having the usual undead immunities. 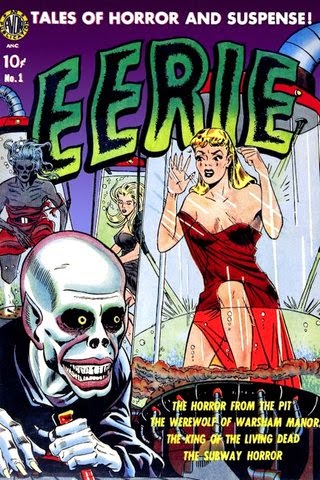 The King was once a highly dangerous occultist but local Neo Englanders formed a mob and destroyed him for practicing black magic but they were wrong. The fumes and flames from the occult Other world kept him alive and mutated his body. A recent Earthquake freed him to begin his reign of terror well into the Twenty eighth century.

Frequency: Unique
No Encountered: 1 (1d8 +3  wight servants)
Size: L (7 1/2 tall)
Move: 150 ft
Armor Class: 4
Hit Dice: 45 (5+5 hit dice)
Attacks: 3
Damage : , 1d4 claw, 1d4 claw
Special Attacks: Level Drain or  Spells from the Black Magic List, Energy Weapons
Special Defenses: Undead immunities
Magic Resistance: 30 %
Lair Probability: 80%
Intelligence: High
Alignment: Chaotic Evil
Treasure: Personal, 1d30 x 100 gold pieces, various super science or sorcery relics, in lair a fully stocked super science laboratory
Level: 8
XP 2600
The King of the Undead has the supernatural ability to communicate with any undead within a 2 mile radius of his physical location telepathically.  He is also surrounded by 1d8+3  random wight servants and body guards. The King can once per day create 1d10 minor zombies with his other worldly powers. And he also has a 60% chance of taking control over any minor undead within a 100 foot radius of the decaying fiend.
The King of The Undead works through a wide variety of small thieves guilds, cults, and other front organizations only rarely taking a hand in day to day activities. The King would rather spend his time stalking and hunting new victims for his army of horror and depravity.
Posted by Needles at 11:21 PM