If you've been following this thought exercise or campaign set up of mine then your possibly wondering what sort of bad things I'm I going to do with Edgar Rice Burroughs Pellucidar? Quite a bit actually.


When we begin looking into Pellucidar, we're looking at one of the greatest of ERB's literary worlds. This is a mind mindbogglingly huge world of dinosaurs, prehistoric life, and lots of room for expansion."We know that the crust of the globe is 500 miles in thickness; then the inside diameter of Pellucidar must be 7,000 miles, and the superficial area 165,480,000 square miles. Three-fourths of this is land. Think of it! A land area of 124,110,000 square miles! Our own world contains but 53,000,000 square miles of land, the balance of its surface being covered by water."

This is the entire area covered by the novel At The Earth's Core and there's plenty of room for expansion.

You could fit any of the lost world adventures that have come out add in adventure elements as needed and still have room for a complete alien civilization or ten. And Pellucidar is weird,I mean really strange in both in your face and subtle ways.  David Innes the protagonist from the first book goes off has adventures after escaping the Mahars (psionic reptilian masters of the area of Pellucidar) and leaving  Abner Perry on his own for what seems like days. At least to David, actually Abner doesn't even notice that David is gone! Why because time is subjective in Pellucidar. This all comes down to the inner Earth's sun and dead world because there's no night in world except in the Land of Awful Shadow. Because of the inner Earth's moon. As for peoples of Pellucidar there are a couple of major races in the first two novels. According to Public Domain Super Heroes :


Mahars: A race of intelligent flying reptiles, about 6-8 feet in length, who appear to be one of the dominant lifeforms of Pellucidar. They live in subterranean cities and have telepathic powers. In addition to winged flight, they have webbed feet and are excellent swimmers.

Sagoths: Semi-intelligent ape-like men who faithfully serve the Mahars. They have sleek black skin, large white teeth, short legs, long arms and thin prehensile tails capable of supporting their weight. They live in huts built in the trees, 50 feet above the ground. They have no weapons and wear no clothes or garments. They are very strong and agile and tend to grin and chatter.
Primitive Humans: There are humans who live in Pellucidar, surviving with primitive tools and weapons in the dangerous jungles. They wear animal skins and metal jewelry.
The lands are also inhabited by a wide variety of dinosaurs and prehistoric creatures, including saber-toothed tigers (tarags to the natives), cave lions (felis spelaea), cave bears (ursus spelaeus), giant sloths (megatherium), hyaenodons, mastodons, and raging bos (thags to the natives). The skies are dominated by fierce pterodactyls (thipdars to the natives). The waters are inhabited by all manner of prehistoric monsters and serpents including labyrinthodons, ichthyosaurs (azdyryths to the natives) and plesiosaurs (tandorazes to the natives).
Now another weird thing about the natives is even with massive land masses, prehistoric horrors lurking around every corner, etc. The natives never get lost, ever. They have a weird built in homing instinct. Drop one ANYWHERE in Pellucidar and eventually they'll find their way home. Pellucidarian homing instinct is in my mind one part psionic talent, two parts magnetic gland ala a pigeon, and something akin to the instincts of sea turtles.  There's a vast discussion of this over at the ERB magazine right over HERE
Basically Glick PC's can't get lost or separated from the place that they were born in.  With a simple Wisdom roll the PC will know the direction, foot time, and distance to travel from their current position in Pellucidar. They do lose this ability if they travel outside the bounds of the inner world.

Grab It For Free Right Over
HERE
Everything that a DM needs is mostly contained within the first two novels, At The Earth's Core and Pellucidar. But for decades fans have been mixing in and matching elements from other 'lost world' novels into the mix. This includes both official nods such as Dr. Eric John Holmes novels Mahars of Pellucidar which is in a class all by itself.

To the more recent mockbusters like the Ayslum's Journey to the Center of the Earth. There has been speculation that the inner Sun and moon of Pellucidar are responsible for dimensional anomalies, gravitational phenomena, and dimensional gates going back before the Innes expedition.


There is speculation that the inner Sun of Pellucidar is in fact a black hole and at least partially responsible for some of the incredible effects of time, space, and energy within Pellucidar. The Star of Pellucidar article by Den Waldron touches on exactly what and how such a star as black hole might operate. Mr. Valdron takes the speculation a step further to talk about the connection floating islands, gravitational gates, and survival of prehistoric species in Next Stop Pellucidar.
For years there has been speculation among ERB fans that Pellucidar has been supplying Skull Island with its dinosaurs according to author Rick Johnson's Island Of The Skull  And then the ball is picked up further by Den Valdron again in King Kong The Lost Civilazations of Skull Island  & King Kong II: How did that Monkey get so Big?  This is all reference back upon itself in more of Rick Johnson's articles Doorways to Pellucidar:  Zanthodon  And Doorways to Pellucidar: Zealandia

So to take it a step further into speculation, the ecological and entire structure of Pellucidar doesn't make any sense unless it's an artificial creation and I personally think it is. In fact, I think that its the creation of a race higher dimensional entities that watch over the place. To take it even further I think that the micro campaign settings that have been all of the rage lately in the White Star Rpg system.  But this approach isn't new at all. There have been underground kingdoms, lost worlds, etc. going back before the release of Pellucidar.  Personally, in my humble opinion to rip off an idea from comic books every dungeon underworld is a reflection of others across the planes. Cross from one and you might find yourself in another. These transitions can be bone ripping trips from the underground world of Journey to the Center of the Earth to gradual transitions on boats, planes, etc. to other worldly seas ala The Lost Continent movie .  All of these places of Terra Obscura are all connected in one way or another with Pellucidar.
In fact for game play with free adventures like the Stone Alignments of Kor Nak  there are several places in the underworld that can lead straight into micro adventure campaign places like Pellucidar. There by providing the party & DM a perfect venue to use ERB's creation as as a nice Appendix N variety.

This leads back to the speculation that perhaps all of these lost worlds and forgotten kingdoms lead back into Pellucidar via dimensional gates, keys, and other tunnels but why? And what does this have to do with an upcoming title for the Lamentations of the Flame Princess rpg? More coming up in part Three. 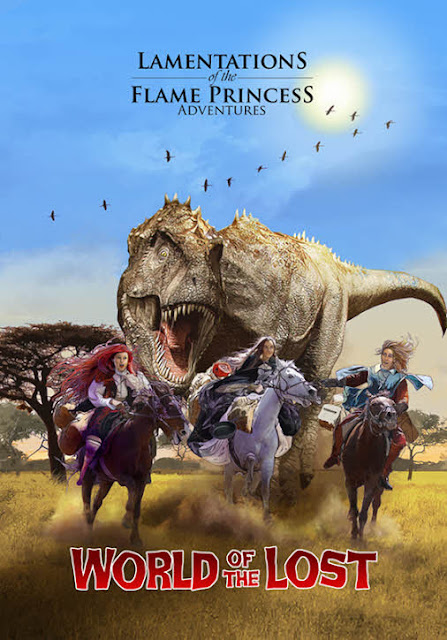