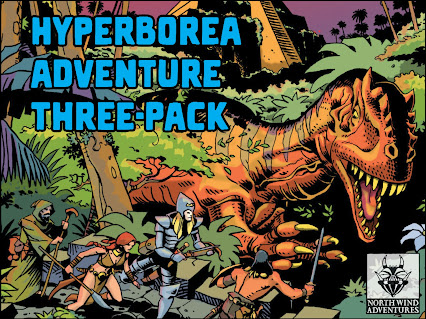 Get In On The Action Right Over
HERE

The award-nominated role-playing game, Astonishing Swordsmen & Sorcerers of Hyperborea™ is back with three new, exciting adventures!
Each of these sword-and-sorcery adventure modules is site-based, fleshing out some small portion of the Hyperborea setting and providing classic, memorable adventure material.
These adventures are designed for the AS&SH™ game, but they are suitable for use with the traditional editions of the world's most popular RPG, as well as its modern simulacra, such as OSRIC™ and Swords & Wizardry™.
Physically, each module will be saddle-stitched, range from approximately 44 to 56 pages, and measure 8.5 x 11 inches. Each will feature full-colour, card stock covers, and sharp, black & white interiors.

So basically if your into old school sword and sorcery campaign adventures this one to get in on. The work is up to the usual AS&SH standard and the systems of these adventures are on par with other AS&SH titles but I dare say from what I've seen they surpass them in campaign scope, application, and utility. 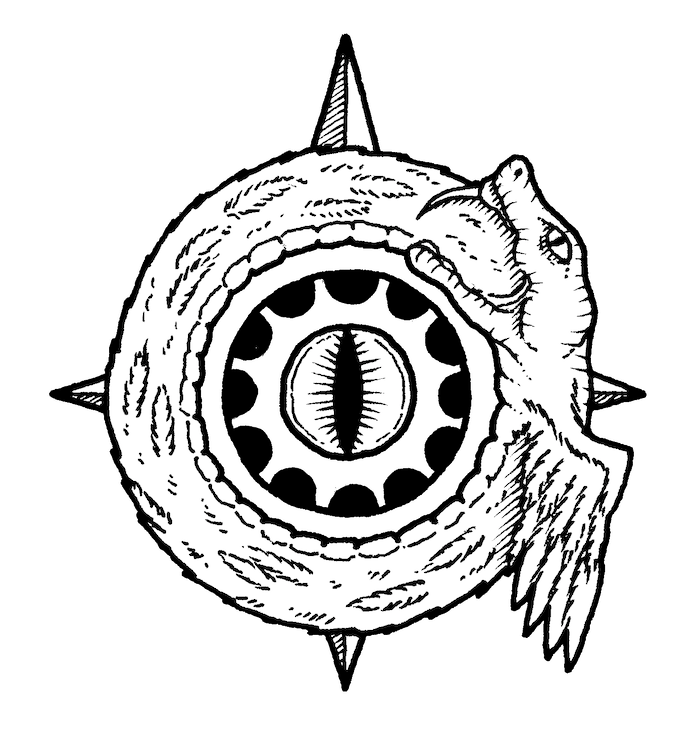 For example the Ghost Ship of the Desert Dunes has some very interesting and exceptional adventure ideals for the Hyperborea setting:
Somewhere in the depths of Diamond Desert lie the skeletal remains of Ymir’s Serpent, a legendary Viking longship. In days of yore, Sigtrygg Forkbeard led his company upriver, piercing the desert’s hostile heart. There the Vikings unearthed a lost mine brimming with green diamonds, but the River Æolus desiccated as the Serpent prepared for launch, and the ship was swallowed by the dunes. Forkbeard and his company were never seen again, but tales of a shimmering Viking ghost ship gliding over the dunes persist to this day. 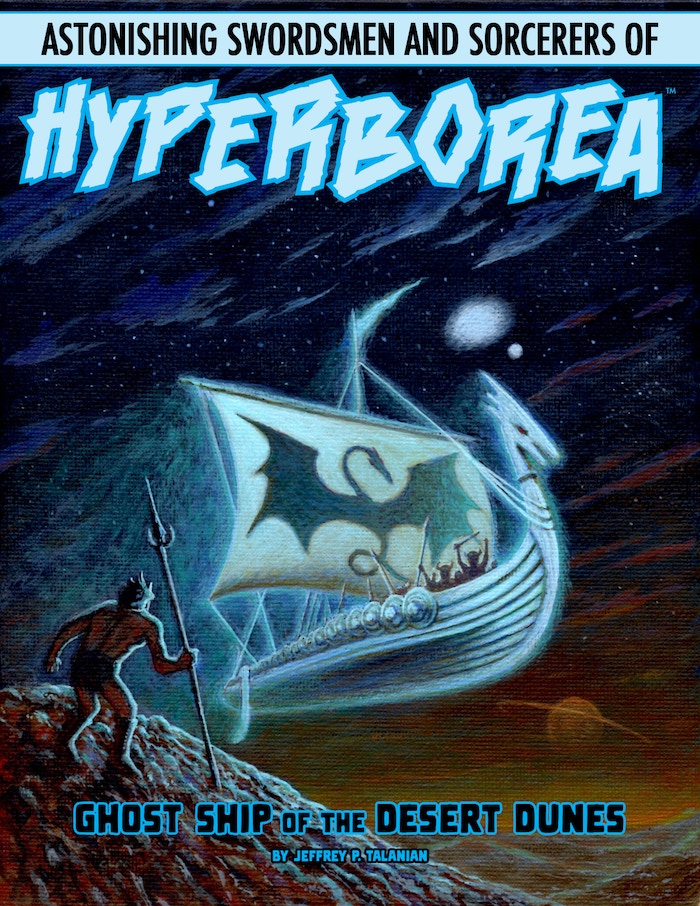 The Forgotten Fane of the Coiled Goddess is an adventure for from four to eight characters of 5th through 7th level, for use with Astonishing Swordsmen & Sorcerers of Hyperborea™ and other traditional fantasy role-playing games and features one of my favorite races from AS&SH the Ixians as background fodder for this piece: More than a month ago, your party found itself in Port Zangerios, where you heard of an Esquimaux thief selling a treasure map. Low on wealth but high in courage, you sought him out. The man turned out to be a fearful ex-slave who had “acquired” the map from his Ixian master. The map is incomplete but shews the Isle of the Serpent in far-off Lemuria, where rests a fabulous treasure called the Feathered Crown of Nanasa (or so thought the Ixian). Pooling your money to purchase the unfinished map, you bought passage on an Amazonian trade ship. After passing through tempests and torrential rains that shimmered with auroral light, you have come to the great city of Jhaman Ket. Now you must seek out the location of the Isle of the Serpent. 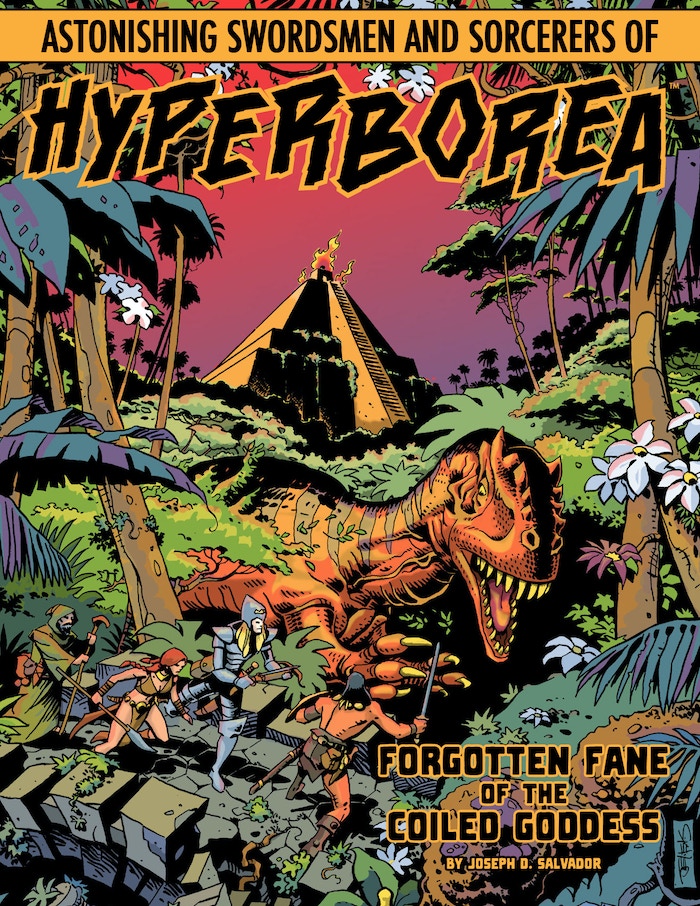 Finally is Beneath The Comet and this rounds out one of the exceptions for the adventures: For weeks the Comet has blazed in the sky above Hyperborea, inspiring widespread superstitious dread and fear of some star-borne contagion. Under the light of this harbinger from the Black Gulf, the PCs have come to Bogrest, following a magical treasure map that reveals great wealth buried in the Lonely Heath north of the village. Finding that treasure will be no simple matter, however, for Hyperborea is a weirder and deadlier place than ever beneath the Comet. 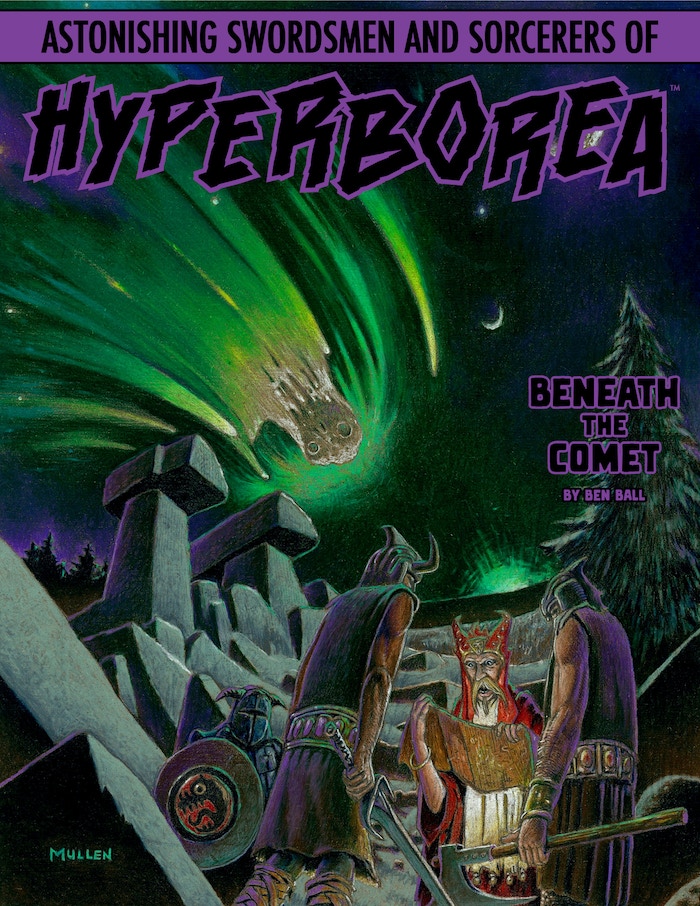 As a dedicated AS&SH DM this is some very exceptional & exciting news, the Kickstarter is off to a great start and there's some real energy about this one. Grab some gold pieces and throw it the AS&SH crew's way and really get the ball rolling so that we can get these adventures out into the OSR wild! Cheers and this one looks like its going to be an exciting Kickstarter to get in on!
Posted by Needles at 10:55 AM