The Kickstarter for Maximum Mayhem Dungeons #3: Villains of the Undercity by Mark Taormino For Your Old School Campaigns


I've been waiting for Mark Taormino to come out with a basic style adventure for OSRIC for quite sometime. Since talking with the author himself last year about it on Facebook,well it looks like all hell has come loose and his Freakshow Games label has another Kickstarter right over HERE
Go watch the video for the project its pretty fun and gives a nice outline for this project of his. I wanted to help turn the volume up on the project. Mark has been doing some damn good modules for the OSR for quite some time and its nice to see this one aout of the gate. 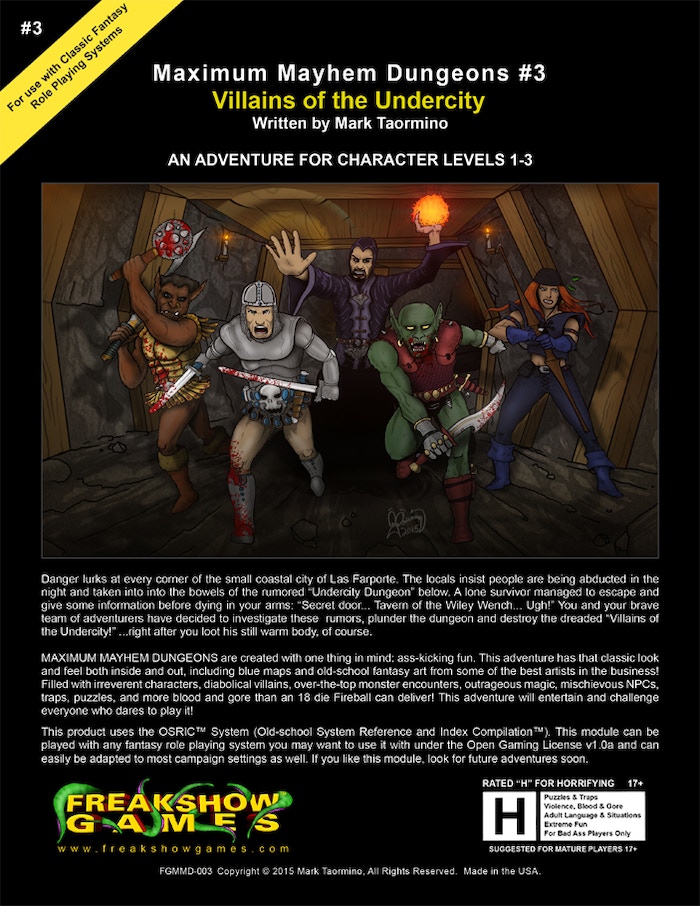 Mark Taormino is coming out with another Kickstarter and it looks like a really solid dungeon design. The idea seems simple enough but I know Mark and the way his twisted DM/writer's mind work and nothing is ever simple with his material. So this Kickstarter looks like another echo of everything he loved about old school modules put into one package.


Maximum Mayhem Dungeons #3: "Villains of the Undercity" has a bit of everything according to Kickstarter and his ideas on this one are interesting and intriguing. He's got a nice grasp of his audience. So I'm interested and I'd love to have this one in my hands to see where the adventure is going to go. The plot is very retro and looks right up the alley of the OSR.


Danger lurks at every corner of the small coastal city of Las Farporte. The locals insist people are being abducted in the night and taken into into the bowels of the rumored "Undercity Dungeon" below. A lone survivor managed to escape and give some information before dying in your arms: “Secret door... Tavern of the Wiley Wench... The password is... the password is... Ugh!” You and your brave team of adventurers have decided to investigate these rumors, plunder the dungeon and destroy the dreaded "Villains of the Undercity!" Oh but first loot the body, of course. He won't mind... he's dead.

This module is designed for character levels 1-3 and can be played with the OSRIC(tm) system or easily adapted to AD&D, D&D 1e to 5e, Pathfinder, D20 System, Labyrinth Lord, BFRPG, Swords & Wizardry, Warrior & Wizards, etc or any fantasy role playing system you may want to use it with under the Open Gaming License v1.0a! The module will have a mix of hack & slash and interesting puzzles, traps and characters. I need your help to actually finish it and turn it into a real game book for you and your players to enjoy. It can easily be adapted to most campaign settings as well. If you like this module, look for future ones soon (I have about 10 more planned so far and will make more after that).
Do I think that this is worth your time, effort, and money to make this adventure see the light of day? Yes, in a word I do and I've got The Hanging Coffins Of The Vampire Queen adventure as evidence for Mark's efforts as quality product to back that statement. So go back this one, and let's loose the Villains of The Undercity upon the OSR! 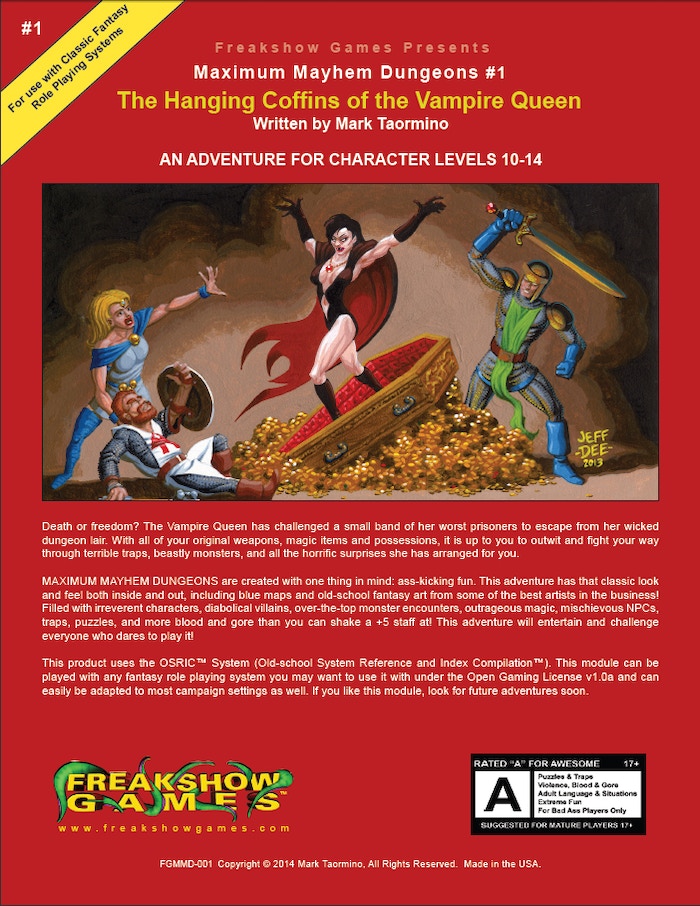