The Peter Plastic Unit For Your Old School Campaigns 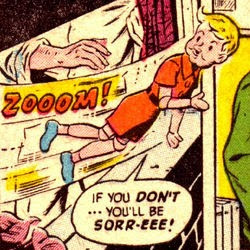 The jingle from the popular 2889 toy commercial by the Underwodd Educational Toys Corporation, one of the largest toy companies in the world. Peter Plastic is or was the latest in advanced robotic nano cybernetic life form technologies. Worked up with a complete unbreakable skeleton, advanced nano muscle system, complete nervous system and 312 miles carbon fiber neuro wires. Peter was created with a snap shot of a human child's mind but lacked the human soul. Developed by mechanical engineer and occult genius Eric Fenn. The power source for the Peter Plastic unit was lacking until a mystic storm animated the 12 inch tall menace. The dimensional occult power animated the doll like menace and the first one tricked Eric into creating another one of the pint sized horrors. There is speculation that the occult technological super science that went into Peter's design came from an other dimensional or occult source. Some speculation exists that these horrors are used by demonic or black magic cults as spies and saboteurs. Often times these cults become nothing more then pawns for their fiendish occult cybernetic creations.  Peter's share a limited collective cybernetic consciousness and are capable of learning up to third level black magick spells. They often have access to a demonic cult's library and will learn as much as permitted.
These horrors are capable of becoming lighter then air and have a flight class 'B' ability to move through the air.  Each one of these horrors is a gossip monger and uber creepy stalker and black mailer. They often attach themselves to a party of adventurers and through evil schemes and black mail will manipulate a party into doing the twisted little psychopathic unit's bidding involving murder and foul deeds.  Each one mounting in scope and corruption of the party of adventurers into the blackest of evil and horror. Each one of these foul fiends is capable of discharging an electrical shock capable of stunning a strong man easily or it is capable of hurling a miniature electrical bolt capable of doing 3d8 points of damage. They also have an ball lightning attack capable of melting steel cable but they are loath to use this attack and only do so as a last resort. They are capable of doing this magical electriclal attack three times per day and it does 3d6 points of damage each time used.  These horrors feed upon electricity and can regenerate as a troll should they be struck by magical lightning or the like. Should they expend too much electrical energy they will be stunned for 1d30 rounds and very vulnerable but a little electricity will snap these horrors back to full hit dice. There are rumors of some of these horrors being able to feed on the bio electrical auras of people during certain circumstances.
Peter Plastics roam the wastelands of the world in search of gossip and amusement. Sometimes they have been found as the heads of assassin guilds, thieves guilds, and other corrupted organizations pulling the strings of such operations through proxy heads. Or other dupes that they set up as false heads and targets to be taken down only to reform such organizations. Murder, mayhem, and utter contempt for human life marks these evil cybernetic horrors.
Posted by Needles at 11:30 AM