Taking full advantage of the Atlantis sonic wave technology this device was used extensively in Atlantian outer colonies and splinter realms. This non lethal weapon uses a sonic wave to knock targets down at a range of 100 feet from the shooter. The weapon has a sonic generator and kinetic energy storage device just above the handle. Cocking the weapon brings the sonic energy into the firing chamber, the weapon releases a wave of sound energy at the target from the barrel. Those in the area of effect must make a device saving throw or suffer 2d4 hp damage and be stunned for 2 rounds after being knocked back ten feet from their original position. If the save is made the target takes no damage but is still stunned for 1 round. 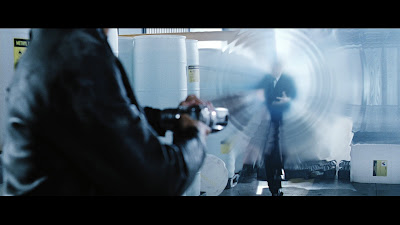 Because of the sonic pulse wave coming from the sorcerously hardened  aurichalcum.  The weapon can be used up to ten times per day but any more then that and there is a 1 in six chance of the sonic generator unit cracking and exploding causing 5d10 hit point damage to all within 10 foot radius.
The weapon can charge up to fire in a segment and put a massive charge of sonic energy into a target.
These weapons were once common throughout Hyperborea thousands of years ago but the Green death swept through the mystical workshop were these relics of a bygone age were made.

Recent evidence points to these weapons finding favor with the Derro and certain other horrid creatures  of the Hyberborean underworld who appreciate the virtues of a weapon that not only renders its target immobile but often times of very limited little to know psychical injures. These weapons often find their ways into the hands of slavers and royal warlords who uses the weapons for lightning slave raids and kidnapping plots against enemies.

Often these weapons are highly prized finds in the vaults of certain ancient clans of high profile royalty whose ancestors used these weapons not only for crowd control and subject suppression. These weapons often fetch prices of 7,000 to 8500 gold pieces on the open market for these weapons are often considered family heirlooms passed from father to son. There may be more examples of these incredibly valuable non lethal weapons from a by gone age in certain wasteland ruins, buried deep under the Earth or hidden within vast underground Hyperborean vaults.

This post is for entertainment and educational purposes only, there no intention to infringe upon  the trade mark and copy right of the film Minority Report.