Events during last night's game were intense to say the least and I didn't get back until at least three A.M., the PC's in last night's game were interested in doing a bit of pillaging and looting among the ruins. Because let's face it, looking for relics and high tech wiz bang artifacts is all part of the fun!
But when your dealing with a post apocalyptic wasteland that's suffered some nasty short set atomic warfare during an alien invasion things are bound to get really weird.

So taking my lead from Venger's How To Game Master Like A #$@#ing Boss, I kept the action moving by having the party have enough time to loot the ruins using Outland Art's Wasteland Treasures One available right over HERE. Now the thing about this book that is so great is that its pretty much got a ton of material and relics that are easily translated right over to ANY post apocalyptic old school set of rules. This includes a D&D style game such as Fantastic Heroes and Witchery just do a quick flip on the gold pieces to dollars ratio and your set. Much of the technological level is right there with Fallout style post apocalyptic campaigns. Its one of the things that makes Mutant Epoch such a fantastic PA tool box for old school campaigns. Wasteland Treasures is free btw.

So the party of adventurers ran into something really nasty and not native to Waterbury. Six armed intelligent mutant apes that were henchmen monsters for the Gatherers. These bastards are fast, nasty, and very dangerous. They've actually got the party of PC's pinned in the ruins they were looting which brings me tonight's game. The other group is going to have to save the first one. To be continued tonight!
Six Armed Horned  Mutant Apes 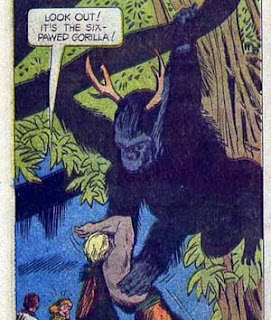 Frequency: Rare
No Appearing: 2-8
Armor Class: 6
Move: 14"
Hit Dice:7
% in Lair: 10%
Treasure type: C with a sprinkle of high tech relics
No of Attacks : 4
Damage: Claw 1d4/1d4/1d4/ Bite1-8
Special Attacks: Rending, Poison
Special Defenses: Non
Magic Resistance: Standard
Intelligence: Average
Alignment: Chaotic Evil ( Savage, Cruel)
Size: L (8")
Psionic Ability: 10% of some Psionic Mutation
Attack And Defense Modes: Nil
If the monster strikes an opponent with both hands the monster does an additional 1-8 hit points worth of rending damage. Those hit by the monster must save vs poison or be rendered unconscious or stunned.

These are genetically engineered troops of ape like mutants from a combination of man and the six armed apes found in Atlantis thousands of years ago and used as guards on their Martian colonies. These horrors are cunning, cruel, and vicious to a fault capable of using technology and taking orders. The horned apes prefer using their vicious claws and  powerful tusks to subdue and kill prey. These monsters unlike true apes are true omnivores and vicious to a fault due to their genetic heritage form mankind. They bare the weird mutations of their ancient ancestors making them a formidable and much sought after mercenary force in the underworld. They are a fickle and dangerous force to employ at best. These monsters have been transported to other worlds as well and can be found anywhere throughout the cosmos.

Note that using the rules for technology and artifacts condition and tech level in the Fantastic Heroes and Witchery game are paramount. The rule book contains a really well thought out section on post apocalyptic relics and technologies. Not all that hard to do a quick translation between games when using the rule set.