The Void Ship Vengeance sailed this evening on a mission of extreme urgency at the request of the grand council of Atlantica. The ship was crewed by a band of desperate pirates and planar outlaws in the Outer Darkness who were on a mission of extreme danger. A Demon Whale  was leading an Abyssal demonic horde to tear one of the trade partners of Atlantica Tau Seti IV. A 11:00 hours the crew engaged the horror and its demonic horde. The battle went on for over two hours rolling in the darkness between dimensions the Vengence engaged the enemies and was nearly destroyed as the creature summoned foul magicks from the darkness between the stars. The ship launched torpedoes and was able to fend off the beast's compatriots.

Now comes the matter of tracking the demonic crews and ships that were shadowing the beast during the whole incursion. After some time an other fleet of void ships responded to the hails of the Vengeance.
Above the heart of the fight was the banishing of the whale back to Outer Darkness. This was accomplished by the sacrifice of the magus Zaruzu from Torath 8th level grey wizard. The whole event was witnessed by an Imperial Elven battle ship from a distance. But why?

Now begins the clean up of the hordes of the Abyss and this is no easy feat at all. What does this adventure event hold for the Neo England crew and party?

Background On The Battle For Tau Seti IV
I was called in last minute to run a game of Fantastic Heroes and Witchery with an almost but not quite Spelljammer vibe. Fortunely I've had an adventure written up from a few months ago using my Accursed Atlantis setting written up using conversion notes I'd done using The Mythos Society Guide To New England by Clint Staples. One of his overflow monsters makes an excellent boss monster for a horde of Lovecraftian demons. The demon whale makes an easy fit into the background of other dimensional space pirates especially since I mixed in some of the elements from Space Pirate from Planet Comics. You can find a ton of Clint's bonus content right over HERE .

A bunch of material is straight out of the Fantastic Heroes and Witchery rpg itself with that great Law vs Chaos bit going on right in the backdrop of the game. This allows me to plug and play the elements that I happen to love right into the background. 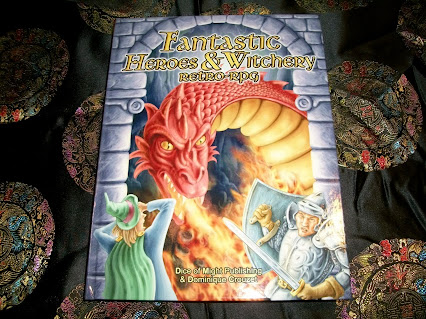 Finally Revelry-in-Torth and  How to Game Master like a F$#@ing Boss by Venger Satanis gave me those last few elements I was lacking for tonight's game. All in all I pretty much pulled out what I needed for my players last minute. It wasn't a bad game but with seven players and getting called in on a Sunday night to DM took me by surprise!
Thankfully it all worked out in the end. Cheers until next time!