The children  of Camazotz or Nightscreams are a mutated giant bat species that is up from the inner Earth going all of the way back to the time of the cults of the Zapotec Indians of Oaxaca, Mexico. These mutated giant bats were known as the handmaidens of both Camazotz & Bagorah. The ancient Mayan culture saw these giant bats as ill omens & among the local tribes they were known as the bringers of famine for they fed on local cattle & livestock. 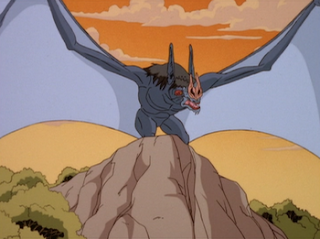 The children of Camazotz were also spoted in West Africa from the West African Rift which opens into the inner Earth. This rift was used extensively by the Nazi during the 'Occult Wars' of the 1950's to capture several Kaiju species. The giant bats were among these Kaiju & they were not seen again until the 90's. Area 51's hunter squad captured several of the bats using sonic weapons to subdue the creatures. Several were taken back to the Area 51 containment facility but a mated pair escaped. They reestablished the colony within the Southern tip mountains of Mexico. Local legend & mythology allowed the monsters to flourish well into the later 2000's.
These monster kaiju are capable of carrying off an ox cart & oxen quite easily. They retain an incredibly strong sonic attack capable of blowing most industrial glasses, steel, & even the hides of some armored monsters. The giant bat species are capable hunters able to track kaiju pray across hundreds of miles using echo location. 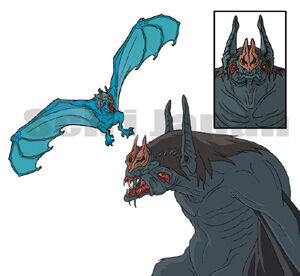 The Giant Bat is able to fly at high speed and altitude for long periods of time. And this allows the giant bat to be an incredibly effectient hunter. These monsters are highly adaptable but very weak in daylight. The light blinds them & can cause minor burns on exposed skin of the monster. The kaiju quickly regenerates from these minor inconviences. But the real danger comes with swarms of giant bats suddenly begin to form from the inner Earth. This is often due to either the call of Camazotz or a feeding frenzy. The bite from a giant bat is capable of slicing through the hide of even a fellow kaiju. The giant bat feeds off the blood of other Kaiju powering itself up with the energies of its prey. Because the giant bat species has such a popular following among the cults of both Camazotz & Bagorah the monsters can often be found in areas where the cult is operating.

Giant Bat or Children  of Camazotz 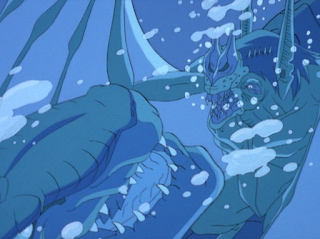 #Appearing: often only one when acting as a scout for a colony of 2d6
5/10, Move 20m Flying 60 M,  Armor 6, Claw (melee 3d damage), Bite (melee 4D damage),  Survival 3,  Combat 2,  Melee 2 . Gigantism. Camouflage, Flight, Regeneration As Troll,Thick hide, robust,  Special Abilities - Sonic Scream 4d damage over a 40 M Area, Straight out of the Jungle - The giant bat flies against the light of the moon & blends into the background of the clouds making it very hard to see. This is often done to prey as to not alert them., Bailful Bite- severs limbs on an unmodified attack throw of 12., Deadly Disease Bite - Bite has a  1-in-6 chance of causing  PCs contracting disease if engaged in melee., Kaiju drain - The giant bat does 3D on it's bite attacks as normal but drains another titan for its power enabling the bat to do double damage on its attacks for 1d6 rounds. The bat is powered up on all its attacks for a short time as the delicious atomic powered blood courses through the Kaiju's system. Crashing Claws- The bat powers its claws for a slashing or cutting attack for 4D damage. This attack is usually reserved for prey,  larger Kaiju, or for buildings.
Posted by Needles at 11:22 PM