They are the parasites of the Kaiju, the terror of the prime monsters of Earth & the universe. The MUTO's are as old as time & their queen is a force to be reckoned with in the world of the Kaiju. The queen Kaiju is the oldest & most dangerous of their kind. She is capable of taking on & beating Kaiju many times her size.  The MUTO's migrated millions of years ago from the Inner Earth & have been the baine of existence for many Kaiju over the centuries. 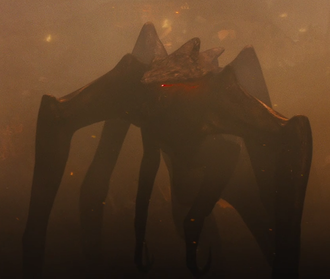 They were in hybernation until the mid 20th century when in Ninteen Fifty Four the last of the Nazi's Thule society bgan to experiment with sonic technologies near Antarctica's Southern tip this was the resting place of the Queen MUTO. Not ready to awaken.. yet. The Queen MUTO let loose a magnetic pulse destrotying the enture cache of mad scientists. She went back to sleep until 2019 when the appearance of King Ghidorh caused the reign of Godzilla. Her awakening in '54 set the stage for Muto Prime & its mate.

The Earth is not the only humting ground of the MUTO,. their range has been found out among the remains of planet ten in the solar system. The MUTO's Kaiju prey's remains has been found floating in the asteriod field between Mars & Jupiter. The Queen MUTO is capable of laying thousands of eggs to prepare the smallest & most dangerous of the MUTO life cycle. These MUTO mini's are twenty inch long micro forms of the MUTO's capable of feeding off any technologies or energy sources. Until they find the nuclear energies that enables only the strongest of the species to evolves into MUTO primes. The queen Muto is capable of holding her egg clutch for many,many, centuries until they are ready to be laid.
The Muto Queen is capable of defending herself against any agressive Kaiju unless she finds an exceptional example Kaiju. Upon dinding such a Kaiju  she will attempt to defeat it & lay her guardian MUTO's within the living corpse of such a beast. It may take centuries before her charges hatch.