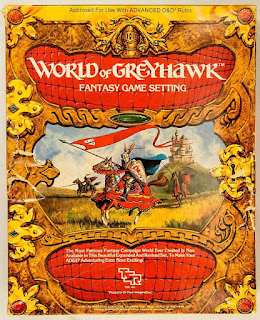 Who could be responsible for the cults of evil in In B2 The Keep on the Borderlands by Gary Gygax?! The list of evil dieties comes down all of the way to one bastard son of a cambion that I can think of. And that's Luz  The Evil! That's right I said it! The three greatest evils to face the Flanaess are Iuz, the Scarlet Brotherhood (representing Tharizdun), & of course Vecna. But only Luz has the experience to know what the Spaceship Warden is & what it represents to the planes.
The cult gets aboard the Warden when a chunk of Greyhawk is teleported over to the Warden or its attendent spacecraft. The Caves of Chaos however are still in deep contact with their master. The old Hermit is actually an unfrozen passenger or officier aboard the ship that's been 'converted' to Luz's cause. The Warden itself is a huge prize & Luz represents a danger to every living thing aboard the Warden. The Carl Sargent  sourcebook/adventure from '93 'Luz The Evil'  is perfect for this set up. Why this book?! JH's review on Amazon goes into the 'why' perfectly; "If you get a chance to buy this book, jump on it. This is the best Greyhawk sourcebook I have seen. Iuz the Evil details the holdings of Iuz, the evil demigod of the flanaess, just after the signing of The Pact of Greyhawk where the Greyhawk Wars ended. The sourcebook begins giving an excellent history of Iuz, from his birth to the end of the Greyhawk Wars. It explains Iuz's fears and aspirations for the future. Iuz's priesthood is examined and new spells and magic items are added for his faithful. All of Iuz's lands are detailed including the howling hills, Dorakaa (the city of skulls)and the rest of the Land of Iuz as well as the occupied territories (Horned Society, Shield Lands, Bandit Kingdoms, and the Land of Tenh). Included are the stats for Iuz's Armies and all the key players good and evil (mostly evil) including the dreaded members of the Boneheart. The sourcebook also gives adventure ideas for low levels all the way to the highest of levels. Another note of interest is that the areas described are the location for several previous adventures including The City of Skulls, White Plume Mountain, The Return to White Plume Mountain, and several others."
Luz this whole time has been 'raising' an army of humanoids aboard the Warden. Hell the clone vats aboard the Warden have been churning them out all this time. Luz's has been excercing his control over the humaniods through his magicks. Is this anything new?! 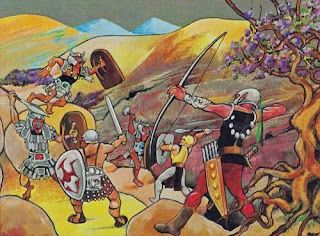 Nope. He's known as the god of pain for God sake. And creating a host of humanoids & undead to take over other decks is just his style. You got to understand that Luz's armies are solidly detailed. And they very much fit the Greyhawk mold of the humanoid horde. Sure there's Luz's inner circle but all in all this is a god that seems a bit linear in his thinking. But why not raise an army of humanoids to do your evil bidding.
Luz being behind the evils of B2 isn't all that surprising. But bringing his brand of evil to the Warden is sorta. And this is because the bastard god of evil knows he's got competition. There are literally hundreds of evil wolfoids aboard the Warden. These creatures & perhaps their shaman's may know of the evil powers behind some of the misery aboard the Warden. the question really is, 'Can anyone spoilt the 'fun' of Luz & co.?
This is where the party comes in. The adventurers are going to be that unknown quality in the works. And this brings up a very interesting point. Can  adventurers really ruin the god of evil's plans?! If everything goes to plan?! Yes would be the answer.
Why?! The keep of course! The keep is one constant's in the module & it offers a safe haven in a sea of chaos that the Warden may become. Hommlet is going to become a casulty straight off. The horde takes out the village unless extreme measures on the part of the PC's is done. 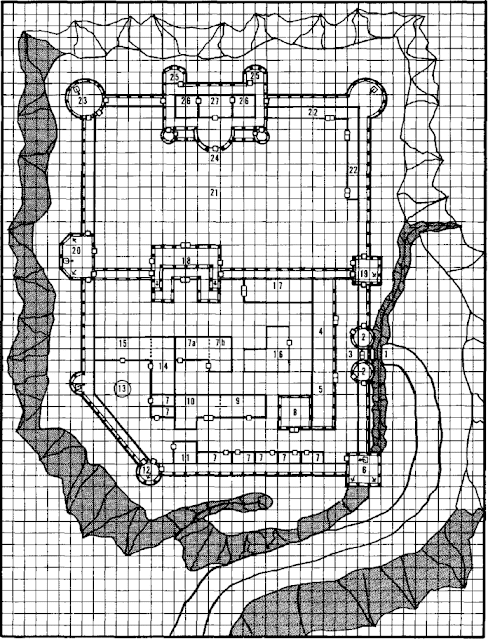 If the humanoids vanish & its Luz wanting to take another deck onboard the Warden then what happens?! Why?! What's his plan & are there other dieties aware of the driving force behind such an action?! There's some excellent reasons for this. One Luz has the idea of using the Warden;s armies & clone vats  as a piece of a planar holdings. Two the Warden represents a possible conquering army for Greyhawk or another such setting. Three the Warden needs to be tamed & its an amusment to Luz fitting his own twisted evil. But there's far more going on here below mere material conquest.