The Kamacuras kaiju species was a byproduct of Black Dragon super science society weather manipulation experimentation during World War II. The Kamacuras as a giant mantis, Kamacuras has all the natural abilities a normal praying mantis would have, such as flight and spiked claws. In the film Godzilla: Final Wars, Kamacuras is shown to have the power to alter its natural color, allowing Kamacuras to camouflage and blend in with its surroundings. 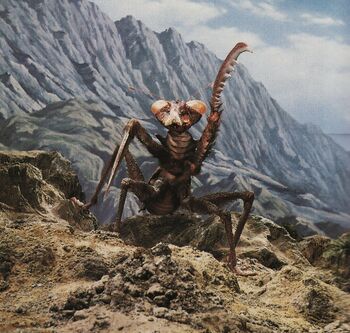