" At the end of the ice age, an evil queen and her son are set on conquering the world using magic and warriors. The lone survivor of a crushed village fights back as does the king of Fire Keep."

Few movies are as Sword & Sorcery especially Astonishing Swordmen & Sorcerers of Hyperborea inspiration as Ralph Bakshi's 1983 animation  'Fire & Ice'.We litterally wore the VHS tape of 'Fire & Ice' out as a kid. The plot is straight out of every drug store Sword & Sorcery paperback during the Eighties especially straight from the wiki entry;"From their citadel Icepeak, the evil queen, Juliana and her son, Nekron send forth a wave of glaciers; this forces humanity to retreat south towards the equator. Nekron sends a delegation to Firekeep, the volcano citadel of king Jarol, ostensibly to request the king's surrender. In truth, the ice queen has orchestrated it as a ruse so that her subhuman troops can abduct Jarol's beautiful daughter, princess Teegra. Juliana feels that Nekron should take her as a bride to produce an heir.

Teegra escapes her captors and comes upon a young warrior named Larn, the only survivor of a village destroyed by Nekron's glaciers. The two grow close, but they become separated when Larn is attacked by a monstrous giant squid, and Nekron's subhumans recapture Teegra. She briefly escapes again, but runs into the witch Roleil and her son Otwa, who intend to use her as a bargaining chip for incurring Nekron's favor. However, the subhumans simply kill them and take Teegra to Icepeak. Nekron refuses to marry Teegra, in spite of his mother's plan, but keeps the princess as a hostage.

While looking for Teegra, Larn encounters Darkwolf, a mysterious masked warrior who pursues a personal vendetta against Nekron and Juliana" 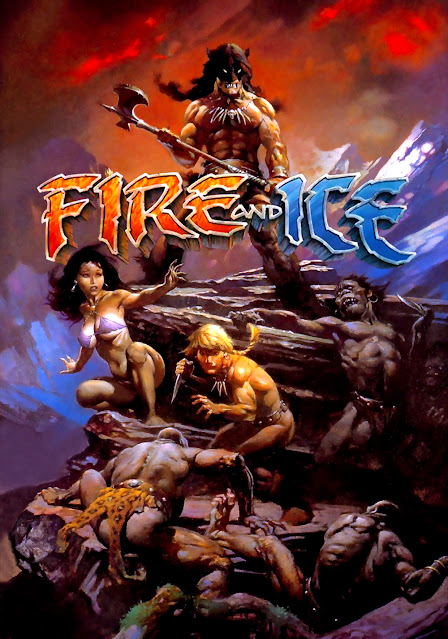 'Fire & Ice' works on several layers as both a pursue film, a Sword & Sorcery film, & as perfectly fuctional Sword & Sorcery inspiration. The film represents the clash of two ordersor ages  in the form the steady conquest of citadel Icepeak forces led by  the evil queen, Juliana and her son, Nekron against the more advanced kingdom of Firekeep. Dark Wolf is definitely a demigod belonging to an earlier 'age of heroes'. Fire and Ice has so much of Frank Frazetta's essence about it because of his involvement with the production according to Wiki;'Because Fire and Ice was the most action-oriented story Bakshi had directed up until that point, rotoscoping was again used, and the realism of the animation and design replicated Frazetta's artwork.[2] Bakshi and Frazetta were heavily involved in the production of the live-action sequences, from casting sessions to the final shoot.[2] The film's crew included background artists James Gurney and Thomas Kinkade, layout artist Peter Chung, and established Bakshi Productions artists Sparey, Steven E. Gordon, Bell and Banks.[2] Chung strongly admired Bakshi and Frazetta's work, and animated his sequences on the film while simultaneously working for The Walt Disney Company." 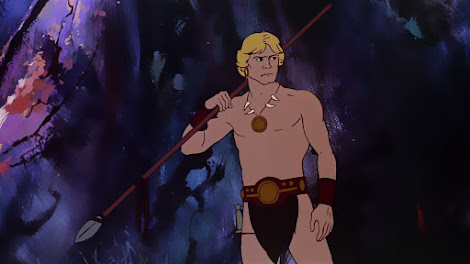 There are five reasons why this film is excellent for Sword & Sorcery inspiration:
While 'Fire & Ice ' is a perfect film as an inspiration for Astonishing Swordsmen & Sorcerers of Hyperborea. There are also several 2d6 Sword & Sorcery rpg's that also could draw perfectly from the world of Arn, Teegra, & Dark Wolf.  Barbaric! by Omer Golan-Joel from Stellagamma Publishing springs to mind coupled with Warpland is perfectly suited to simulate the rotoscoped world of 'Fire & Ice'. 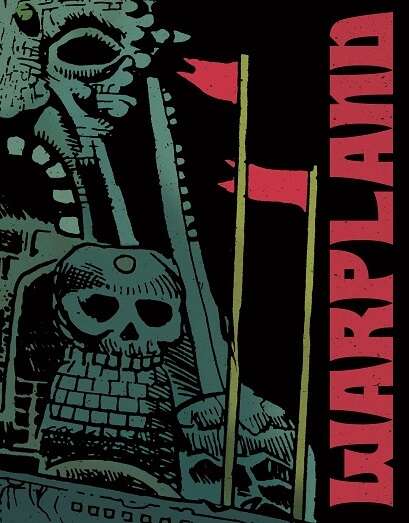 Warpland especially captures the rotoscoped weirdness of the clash of elements, ages, and even hints of older inhuman prehistoric weirdness found in 'Fire & Ice'.  The elements that clash in the film also could very well represent the hard realities of the world setting of Warpland.
Posted by Needles at 10:26 PM