First encountered during the mutant rat infestation of New York City back in the early '00's. But the mutant rats are a cross bred artifically engineered species that goes back the early 30's. The inner workings of the Thule Society in proto Nazi Germany were looking for a terror weapon. The German scientists used early occult technologies to expose several rat colonies to the weird energies beyond the 'Theshold' of our reality. Generation after generation of rats mutated,bred, & during the early '00's during the height of the hot war faze of the Occult Wars. Several strains of mutant rats were let go into the New York underground. Only the strongest survived. 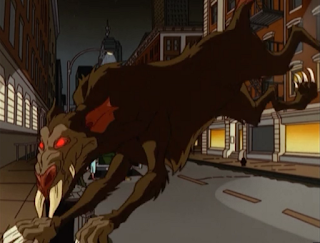 The largest variety of mutant rat is the 'Lord of the Rats', a giant, black-furred Kuiju type with multiple sets of eyes.These giants grow to the size of a city bus & are capable of taking on monsters many times their own size. They have a unique ability to burrow quickly, dark vision capable of piercing even the darkest tunnels. Modified teeth capable of chewing through most soft metals easily. They are capable of moving through water. The 'Lord of the Rats' is able to devour food five times its own weight.
These mutant rats are known to seek out other kuiju to carve out their own terrorities. And these bastard children carry several varieties of deadly disease including the dreaded 'Red Death'. The Lord of the Rats will set up their abodes in abandoned train tunnels, sewers, and buildings. The 'Lord of the Rats' is a deadly predator feeing off of humans if the need arises. But these monsters prefer the taste of Kuiju flesh because of its infusion of radiation. The monsters can easily kill a grown man with one claw swipe.
'Lord of the Rats' are survivors able to thrive in areas where other Kuiju can not and will not. These are powerful mutants capable of settling into ruins or underground complexes. They are superb hunters capable of taking on other Kuiju at a moment's notice. Lord of the Rats may be accompanied by 1d6 mutant rats of  a particularly nasty bent. These are the 'Lord of the Rats' personal Pretorian guardsmen.
Lord of the Rats
#Appearing 1 lord & 2d6 body guard mutant rats
4/7, Move 20 m, Armor 5,  Claw 3D danmage), Bite (melee, 1 damage and may cause Disease; throw Physical 6+ to resist). Gigantism, Survival 3, Melee2, Combat 2,
Specials - Gnaw the Spine - The Lord of the Rats can gnaw through canvas, even Kevlar with easy, Aimed Claw Slash - The Lord of the Rats is able to do double normal damage with a carefully aimed strike, Tail Slap From Hell - the Lord of the Rats is able to snap their tails for 2d6 points of damage. This is a last desparate attack enabling the rat to strike for double normal damage.