The Crackler appeared out of nowhere and drained the energy of a lone building in Manhattan, New York, and destroyed much of it, disappearing soon after. The Kuiju entity is made up of living Theta waves wrapped around a living bio plasmic electrical shell body. The creature was created after the New York Sleep & Dream Institute used experimental technologies that had been mainlined into normal society during the 50's after the 'Occult Wars'. By the Nineties the technologies had been refined or so it was thought.
The Theta Wave Technologies were based on original Nazi occult tech sleep experiments in an effort to create weapons from the human mind's psychic reservoirs. The result were creatures of pure rage & energy as the subjects accessed the higher energy planes. Though the alien Kuiju like entity was defeated the monster has appeared several more times. 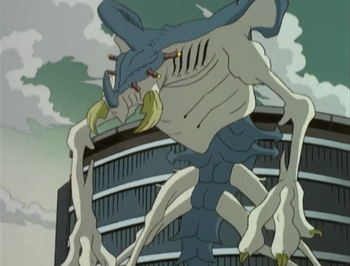 Theta wave dream technologies have been used by S.S. terrorist cells to create other 'Crackler' like monsters. These rare manifestations of electrical cerebral kuiju are capable a great deal of destruction. The downside of such a manifestation of such powerful electro psychic energies is that the manfestations will burn the mind out of the creature's manifestor unless a body throw of +6 is made.
Cracklers are driven by pure instinct & their incredible hunger for destruction & energy which they must absorb to create their bodies microsecond by microsecond. Cracklers are weapons of war & terror pure & simple. They can & have been used as weapons of mass destruction.

Should the dreamer become unplugged from their Crackler the monster will go into a beserker like mode attacking anything that moves around it. The dreamer's mind forms the beast's intellect but on a subconscious level.