Over at the Vaults of Pandius there's a really solid article and battle map on the Caves of Chaos from B2 The Keep on the Borderlands by Gary Gygax by Darren Moffett. He makes an excellent point about his own experiences with B2; " My main Adult Campaign has been running a sandbox around the Town of Threshold and the Characters took the hooks for some things and not others. My Kids campaign consists of whatever the Adult campaign decide not to do. I modified the kidnapped girls scenario from Thorns Mystara to fit my own ideas. The first few Game session with the adults the kidnappings were happening behind the scenes mostly, as they explored the Sewers, the Old mill and Killed a Hag and Rescued a Druid."  This blog post picks right up where this one left off.

If we are using Gary Gygax's  T1 The Village of Hommlet & B2 The Keep on the Borderland together as a part of a campaign  backdrop aboard Troll Lord's The Starship Warden. Then we are going to need a town or village to act as the campaign anchor
The old religion in T1 The Village of Hommlet has been pushed out & the newer faith is taking hold. Could the old religion of the druids actually be the remains of the Warden's ecology sciences department. And the new St. Cuthbert be part of the old  command & control group aboard the Warden?! Sure they could but whose behind the Cult of Chaos?! My guess would be some of the colonial forces aboard the Warden. Little by little a serpent has been winding through the lands of the generation ship. Maybe Robert H. Howard's Set or another Lovcraftian Chaos god is behind the shrine of Chaos in the cavern works in section   'K'.  Where did the humanoids come from?! The Warden is churning them out itself! The Warden  maybe subject to dark forces as the humanoids rage across the land. The Starship Warden has been on its journey for quite sometime now looking at the Starship Warden rpg book. Personally there maybe a door that the cult of chaos is guarding leading  into the bowelsof the Warden. Reading through B2 the cult of chaos is very powerful even though this is a beginning module. They are motivated, have access to magic, & the blessings of their evil masters. So where are their evil masters?! For the Starship Warden perhaps on another deck entirely. Each deck could well be considered another campaign realm entirely. Corrupting the hearts & minds of your enemies is a long staple of Science Fantasy. And these dark powers of B2 have multiple agendas working at the same time. Not even the high technologies of the Warden maybe enough to hold this at bay. The OSR  Grimoire blog has an excellent entry from April 2021 that hits on a high point and takes in a bit about the cosmology of  Paul Anderson like nature of Law & Chaos within B2; "Much has been written suggesting the American frontier as the ideological framework behind D&D in general, and "The Keep on the Borderlands" in particular, (see comments for this post from Grognardia as far back as 2008, as well as this post from Blog of Holding in 2016).
While an important perspective, the later module B5 "Horror on the Hill" (1983) makes a better case for this argument.  By comparison, the near apocalyptic setting described in the background for module B2 presents an endangered civilization under siege:

from B2 "The Keep on the Borderlands"

The conflict between Law and Chaos described above is an example of the influence of Poul Anderson's "Three Hearts and Three Lions" and Michael Moorcock's Elric of Melniboné series on the implicit cosmology of the original D&D game."
This brings up the point is the fate of the Warden more then simply the fate of a spacecraft on an interstellar journey? Ancient OSR theorists such as myself   say, 'yes'.  The Warden's journey has at its heart the frontier within a frontier. 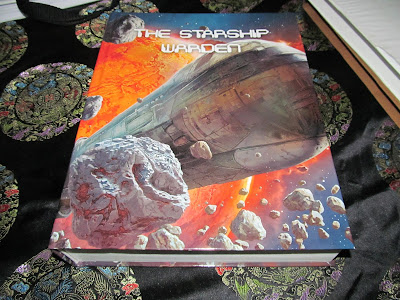