Used extensively by the Japanese forces during World War II, the Ebirah species of Kaiju were controlled by sonic impluses by super science devices. The Ebirah were not seen again around nexus of Kaiju activity of  Monster Island until 1966.  Originally this huge crustacean lived in the vicinity of Letchi Island in the South Pacific. 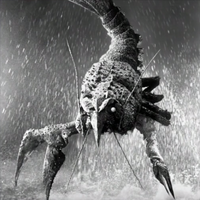 Ebirah allegedly turned into a monster due to the waste flowing from the arms factory of a secret society called the "Red Bamboo". It used its giant, scissor-like right arm and spear-like left arm to attack ships approaching the island, preventing them from approaching the outer reaches of the coast. Its weakness was identified when people discovered that the monster could be thwarted by a bitter yellow juice made from the seeds of plants growing on the island. 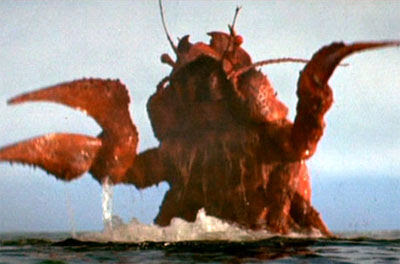 '
Ebirah are found extensively in the Pacific ring area & have been used extensively by the military forces of the Deep Ones or the Atlanteans at various times. The Ebirah are considered some of the most dangerous Kaiju by shipping & cargo companies who offer substantual bounties on these horrors.
Ebirah
# appearing 1d6
5/10, Move 15m, Swim 60 M, Armor 6, Claw (melee 4d damage), Bite (melee 1D damage), Criss Scissors double damage for one attack,  Turbo Swim double movement for 3 turns , Survival 1,  Combat 2,  Melee 2 . Gigantism. Armor, Regeneration As Troll,