This is the first of the Eric John Stark stories & its got all of the pulpy weirdness we've come to expect from Leigh Brackett's Mars. 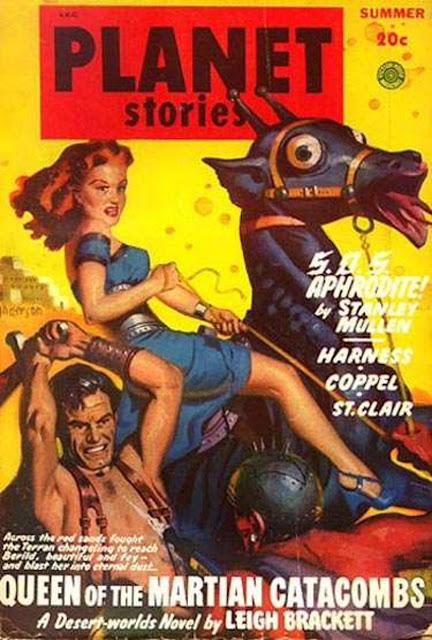 "Gaunt giant and passionate beauty, two dragged thirst-crazed across endless crimson sands in terrible test of endurance. One knew where cool life-giving water lapped old stones smooth - a place of secret horror, death to reveal
S.O.S. Aphrodite by Stanley Mullen - No wonder that signal stabbed out into the icy void from a ship of hate and evil" 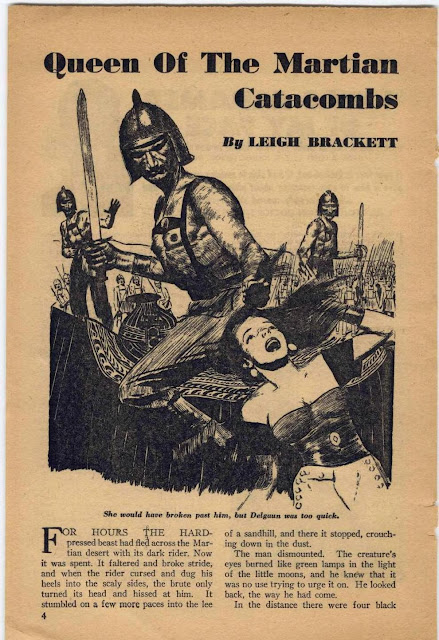 When it comes to iconic Martian tales they don't come closer then Queen of The Martian Catacombs, I've been rereading this tale while I've been flat on my ass with the Flu. Yeah, yeah, I'm taking care of myself and drinking plenty of fluids and the usual whatnot that folks tell you when your sick. What I've also been doing between fever gripped spasms has been rereading Queen of the Martian Catacombs by Leigh Brackett.  Don't let 'the damsel in distress' routine of the Planet Stories pulp artwork fool you. The women in Brackett's tales are power players. They've got more on their minds then mere biological imperatives and it doesn't involve our heroes.  In fact the give and take of the players that are involved here remind me of the best of Robert Howard's & Edgar Rice Burroughs. But its that touch of the forbidden wastelands of Mars that sends it home for me into the field of the Lovecraft circle of writers. There is another twist in which the hero becomes involved with the Terran agents and a little brush fire war going in background of the wastelands of Mars.
The story telling is rapid fire & the material reads like partly between a normal sword & planet mixed with a banana republic revolution set against the dying embers of a world that is half forgotten. In other words a perfect venue for a sword & sorcery style game.
The "Giants of the Earth" articles in old issues of The Dragon gave the D&D stats for Stark( Issue #28, p. 35.) and as I remember he was a total bad ass. This story can be dovetailed right into the C.L. Moore North West Smith tales. This is a Mars on the edge of a boil and almost but not quite brought to its decedent head by internal forces. Here is the perfect Mars to marry to both Astonishing Swordsmen & Sorcerers of Hyperborea & Warriors of the Red Planet. I'll never forget running into the cover for Volume three The Reavers of Skaith. Brackett's Mars has the space ports and Earth's interests clearly marked out, settlements drawn, but this is a world where Clark Aston Smith's Lovecraftian horrors clearly hide out in the desert sands. 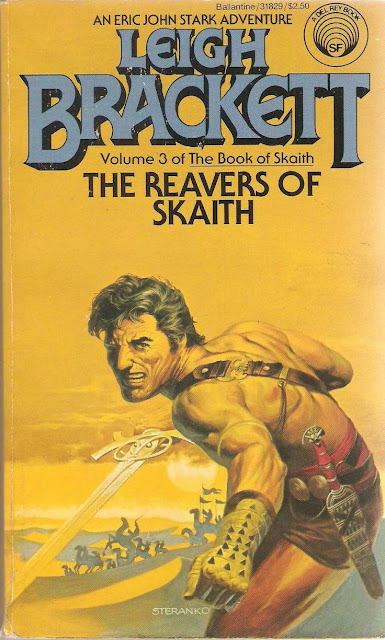 Once again the idea here of the power of the Martian desert world set with the PC's dealing with its ancient realities mixed with the modern Imperialism & Earth Colonialism is a powerful combination. Take the basics of the AS&SH as the back bone system mix it in with the Warriors of the Red Planet retroclone and your ready to go. But there's far more to this combination then simply meets the eye. If we start looking a bit further a field into Gulliver of Mars, by Edwin L. Arnold then we begin to see a very different area of Old Mars. The swampy & highly dangerous temperate polar regions of the Hither & Thither peoples. 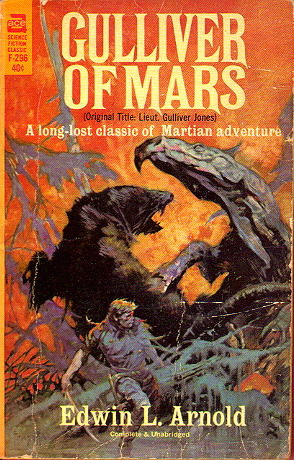 Give the expansiveness of Old Mars this isn't a surprise & there are hints throughout several novels of classic pulp and Victorian authors of connections between lost Hyperborea & Mars as a possible colony. Brackett & Moore take this implied connection and expand on it until we have solid Lovecraftian leads and in roads especially in

Queen of the Martian Catacombs

by Leigh Brackett
Here's where the PC's could easily get caught up in the politics of the Terran Empire & the system crap stirring its engaged in on Mars. This is the same sort of interference & tactics that we see the wizards of Thundarr's era engaged in back on Old Earth. There's far more that's implied here & the connections to some of the politics that we see in C.L. Moore's North West Smith stories can't be mere coincidence. In fact if I was to speculate I'd say that the Sol system pot of Old Earth's system with its bloated suns had been messed with before. This feeling of a trodden upon Mars gives the planet a 'lived in' & on ancient decadence that we don't get with some of Burroughs books.

1d20 Random Ancient Martian Minor Treasures Table
How could we  handle Queen of the Martian Catacombs? We'd really need to use this novella as a part of campaign jump off point. Given the events of this story there's going to be lots of fall out. And where did the forbidden knowledge for this stories events come from?! This is going to lead back into the Martian underworld & possibly the Black Circle of sorcerers moving events on Mars from behind the scenes. There's lots to consider here because the fall out here is going to be intense possibly even leading to a Martian civil war. And that's where the PC trouble shooters are going to have to come in to deflate the situation.
Posted by Needles at 10:27 AM