Slicing Deeper Into Wisdom from the Wastelands Issue #40: New Races 2 From Skirmisher Publishing For Mutant Future Or Your Old School Post Apocalyptic Campaign 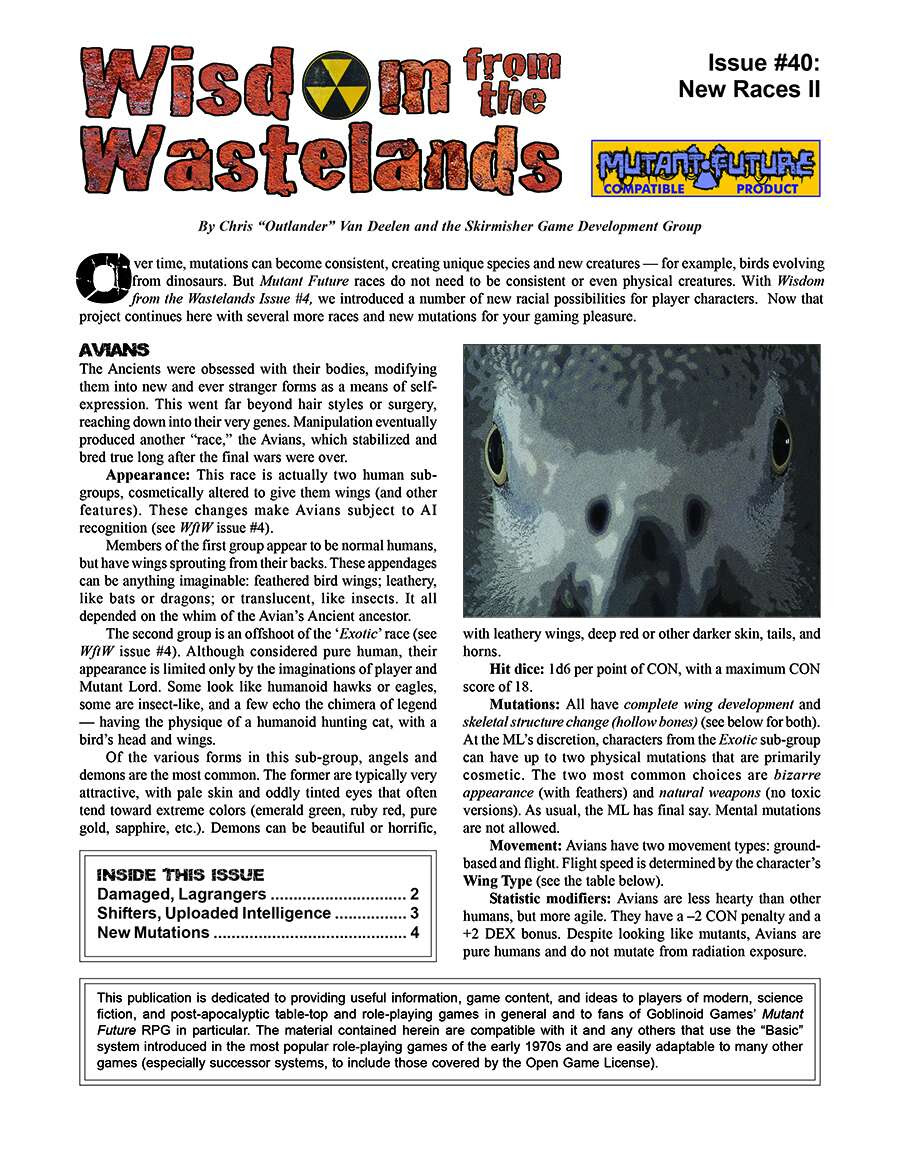 Grab it Right Over
HERE
Clocking in at a mere handful of pages this issue of Wisdom of the Wasteland has a very interesting take on Mutant Species which continues the germ of an idea of evolving species which started in some of the earliest Skirmisher publishing products. The idea that not just one but several mutant races can evolve from one single species of mutant monster often this is a result of artificial means by genetic manipulation or evolved design.
This issues focus is one of new races of pure strain humans, mutants, and mutations the idea here being one of design expansion. The Mutant Future game is fantastic but eventually with all old school games a DM is going to run into a brick wall. He will need brand new material to keep his adventures fresh and solidly interesting one of the prime ways is by the introduction of new races and their addition into a post apocalyptic campaign. This is isn't simply the 'monster of the week syndrome' but a whole new take on races to expand the direct of game campaigns.


These might even be done by folks like the Lagrangers and the various 'Up Loaded Intelligence's' as variations of the usual pure strain humans encountered in the post apocalyptic wasteland. 'The Lagrangers' being space colonists who return to a Shattered Earth and The Uploaded Intelligence's which seem to the in fashion at the moment as the new A.I.. Echoes and copies of uploaded souls of various pre apocalyptic  humans who will be encountered out in the wasteland. These beings will most likely be former ceo of mega corporations, scientists, etc. who will have lots of time on their hands and are most likely going to be more then a bit mad.

The Damaged have lots of potential for causing both mayhem and a whole lot of issues for parties. As monsters these guys are perfect fodder to do a one shot adventure featuring these guys and not have any problem branching these folks off into whole other campaign directions.  The issue is rounded out by the Shifters who are one of the nastier mutants I run across. This mutant race is of course patterned off one of the most beloved Xmen comic villains to appear in comics and the movie franchise but the author has put enough of a spin to keep things interesting. I've used these folks sparingly and they really are very dangerous to the health of PC's as well as MF campaigns.
The issue rounds out with brand new mutations that are perfect fodder for your NPC mutants or for expansion of PC abilities.
This issue is a really nice expansion for MF campaigns where options are needed and the wasteland needs a bit more coverage for new adventure opportunities. Quite a bit of this issue of Wisdom From the Wasteland's goals can be found right in the Drive thru rpg blurb below.

Over time, mutations can become consistent, creating unique species and new creatures — for example, birds evolving from dinosaurs. But Mutant Future races need not be consistent, or even physical creatures. Two years ago, Wisdom from the Wastelands Issue #4 introduced a number of new racial possibilities for player characters. We continue that project here, with several more races and new mutations for your gaming pleasure.
Wisdom from the Wastelands is dedicated to providing useful information, game content, and ideas to players of modern, science fiction, and post-apocalyptic table-top and role-playing games in general and to fans of Goblinoid Games’ Mutant Future RPG in particular. The material it contains are compatible with it and any others that use the "Basic" system introduced in the most popular role-playing games of the early 1970s and are easily adaptable to many other games (especially successor systems, to include those covered by the Open Game License).
Our goal is for each thematic issue of this publication to contain a variety of useful and earnest content that will inspire Game Masters and players alike and provide them with things that they can immediately plug into their games. We very much hope you will find this and subsequent issues of the Wisdom from the Wastelands to be useful and enjoyable!