Hook, Line, And Thinker - A Mutant Future Encounter or An Encounter For Any Old School Post Apocalyptic Campaign 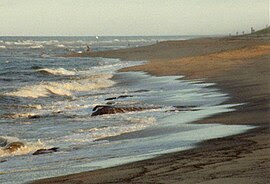 The beaches of Caustic Cod the former Cape Cod during the years of the  post apocalyptic world seem idyllic and relaxed. A place of complete and utter leisure where mutants and Pure alike can get along. But now the world of the  Altered States has been shattered by the appearance of a new species of mutant animal. So called 'Ghost sharks' have been terrorizing the bays and harbors of Caustic Cod. The PC's are contacted by Eddie their Mutant Underground Railroad contact. He meets them at a nearby Caustic Cod sea tavern where the talk is all about the 'demon sharks'  who have taken fishermen down to Hell. 'And the lost souls of the sea  who have come back for vengeance.' Eddie lets the scally wag sink in for awhile until he mentions that he's chartered some fishing time for the PC's with a M.U.R. agent named Captain Skully. A gene spliced mutant with both sea plant and humanoid characteristics. He runs a ship called Lost Dreamer an ancient fishing vessel off the harbor. Eddie is willing to trade three artifacts and two hundred pounds of trade goods or five hundred gold pieces for this mission. 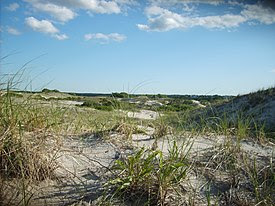 It seems a new super science outfit called Bio Dynamics Inc. has been fishing the waters off of Caustic Cod and they've offered rewards for any mutant sharks caught in the area. Eddie wants the PC's to look into it. A colony of mutant sharks were release into the Altered Atlantic over twenty years ago and apparently the accord has been broken. Now the sharks are back in the waters and out for blood but why isn't clear though.
The sharks are special and highly dangerous when roused and capable of so much more then mere hell bound demons.
Aboard Captain Skully's vessel the PC's will be surprised to learn just how modern this relic is. The vessel is a hybrid using both energy cell/solar to power it. Skully also has an altered telepath aboard called Obsidian a coal black mutant humanoid with white eyes who has a wide range of psychic gifts. He thinks that there is some thing far more sinister going on. 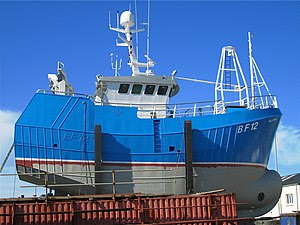 A school of twenty individual sharks is using the area as a sort of feeding ground and testing the locals. Interactions with the sharks should prove both frustrating and slightly infuriating. These aren't ordinary sharks. These are 'Thinker Sharks' that have been released over twenty years ago.
They will pick off any PC's or NPC's if given the chance though after all these are sharks! 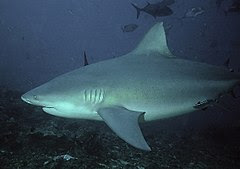 The waters of Caustic Cod are very dangerous indeed and there are several species that are operating within them. A new influence under waves has come home to roast. A Deep Terror Lord has come to the waters of the Altered Atlantic  and is making its temporary home within the wrecks of several ancient vessels. Unlike its lesser predecessors though this is a Deep Terror Lord a telepathic manipulator and predator. This being is highly telepathic and will have several other psychic mental mutations that the DM will see fit. Especially some form of highly specialized mental domination.


Mutations: Aberrant form (extra parts, natural weapons), gigantism,telepathy, and some form of Mental Domination as well as 1d4 other mental mutations
Source: Deep Rising (1998)
The Deep Terror Lord working through Deep One agents is actually the head of Bio Dynamics Inc. and is fostering an all out war between the 'Thinker Sharks' and the population of the Caustic Cod areas  so that it and its brethren will have complete domination of the Altered Atlantic Seas.


Bio Dynamic Inc
This mega corporation entity is a front for the Deep Terror Lords who work throughout the world to alter and change the world to suit their agenda and await when the stars are right again. They work through Deep One agents, cultists, and others for world domination. The company is a deadly adversary working to undermine human, mutant, and other relations with the Altered Oceans. They will often have strike teams of 2nd level or third level Deep One hybrids who use a wide variety of relic and current technology to cause all kinds of havoc to human and mutant alike.
These teams will often have a psychically gifted Deep One among their ranks and from 1d8 fighters using both land and oceanic weaponry.
Bio Dynamic often acts through charity and food donations among sea and coastal communities to foster its horrid agenda. Often after a few years these communities find themselves infiltrated with Deep One cultists or worse as dinner after being fattened by Bio Dynamic Inc. The Deep Terrors often attack without warning.
Bio Dynamic uses and manufactures a number of super science devices and technologies throughout the world. A very dangerous organization Bio Dynamics is seen as a 'good' corporate  entity by many of the mutant and Pure population of the world.
Posted by Needles at 6:37 PM