Review of Wisdom from the Wastelands Issue #41: Alternate Forms of Radiation From Skirmisher Publishing For Mutant Future or Any Old School Post Apocalyptic Campaign 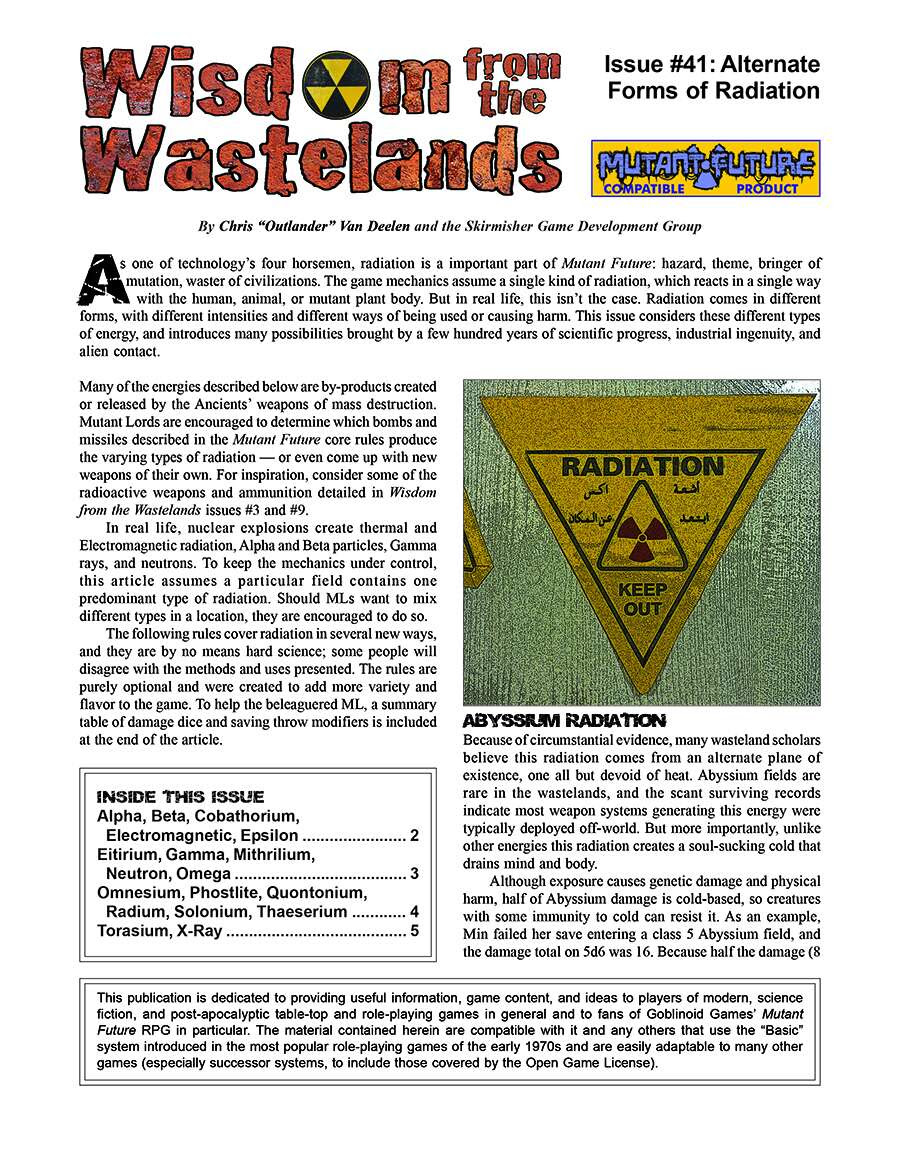 Grab it Right Over
HERE

Here's the latest issue of Skirmisher Publishing's Wisdom From The Wasteland Mutant Future Magazine. This issue is jammed to the gills with a whole new take on radiation in the game and its a great overview of an old school system that appeared originally in Gamma World but its been adapted in a whole new way for your Mutant Future games.
According the Drivethrurpg blurb:
As one of technology’s four horsemen, radiation is a important part in Mutant Future and other post-apocalyptic and sci-fi games: hazard, theme, bringer of mutation, waster of civilizations. The game mechanics assume a single kind of radiation, which reacts in a single way with the human, animal, or mutant plant body. But in real life, this isn’t the case. Radiation comes in different forms, with different intensities and different ways of being used or causing harm. This issue considers these different types of energy, and introduces many possibilities brought by a few hundred years of scientific progress, industrial ingenuity, and alien contact.
This issue puts the radiation issue in post apocalpytic games center stage and does with style and in an entertaining fashion. This subject is one part adventure tool kit, part hazard, all very well planned out. The whole issue is jammed to the gills with several new takes on the energy and its use as well as abuse in the Mutant Future game.
The long view of the subject matter makes radiation both a cause for and consequence of adventures. The ideas here are solid, well done, and completely taken in several new directions. If your looking for a clinical look at the effects of radiation poisoning such as found in real life then I might suggest the latest incarnation of Twilight 2000 an old favorite of mine. But if your looking for a more super human and science fantasy take on the subject then this is your issue. The ideas here are well thought out and can be used to expand as well as enhance a Mutant Future or post apocalyptic campaign
The writers know their subject and make the material fresh, interesting, and warped in several weird ways.  Mutants are going to find themselves subject to some very interesting ideas when it comes to the origin points of their powers and their effects. The long view on the effects of the various types of radiation are here as well as the short view of your favorite mutant's short term exposure.
The overall feel of the issue was as a Mutant Future expansion of the rules for incorporating them into campaign play as well as adventure design. The price of the issue is a simple dollar and for the price of admission your given everything needed to expand your pallet of DM options when it comes to one of the prime opportunities for adventure namely the deadly and mutating effects of radiation. Given the sheer bulk of the material and its over all feel of the subject a DM will have quite a few opportunities to play with the rules and use them as DYI post apocalyptic spring boards for their own adventures in the wasteland.
All in all I really enjoyed this issue and the sheer bulk of the system that we're presented in this issue. Given the track record of Wisdom of Wasteland, I would really like to see a magazine annual. A jump off point to collect several new pieces of material and articles to expand upon the direction that we find here this might give the audience even more options. All in all this to me as a post apocalyptic DM is one of the key Wisdom From The Wasteland issues. A very good and well done issue of the ever excellent magazine for Mutant Future or any old school post apocalyptic rpg.