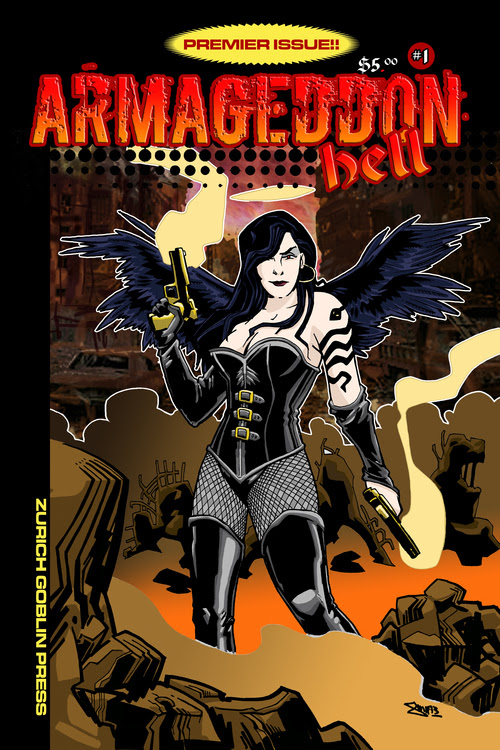 Dan Smith also known as the artist Smif practically defined the 90's through 2000's as far as my gaming artwork went. Lately he's been busy at work on the King of Crime game and this his latest project, Armageddon the comic book.

As it has been foretold, Heaven will begin the Revelation of Saint John with Jesus opening the sacred seals of Armageddon. In the end, Lucifer will be defeated and  New Jerusalem will come into being.  The devil, knowing that God is rarely, if ever wrong, has been working on a plan for changing the course of events.

He needed to find a loophole.
Her name is Emma Doyle.

The Fallen Angels bike gang induct a new member with potential, while a young lady named Emma questions her disturbing dream patterns. Two angels get into a disagreement and a homeless man glimpses a vision of hell on earth.
The book seems to have a very weird sense of some of Dan's art work and writing from some of the materials that he's done in the past but with an interesting spin and a new take on existing Biblical themes.  I'm coming into this already into issue four and the cover looks great. 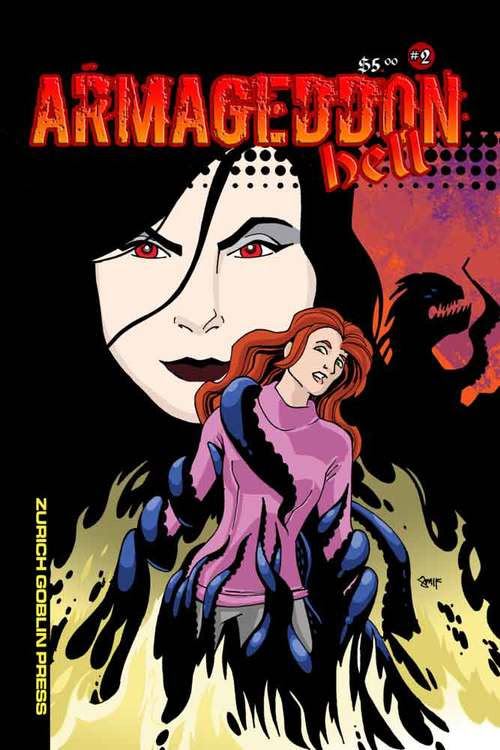 Issue two picks up and builds on the themes of those seen in issue one while moving in different directions as the events of the book heat up both figurative and literally.
The Fallen Angels create disorder in the name of the warlord, Goliath as the homeless man is shocked by the vision of an angel into unlocking his memories. The angel Muriel confronts Emma and her boyfriend Jake at a coffee shop.
Issue three begins to bring in some of the major players and I'm really interested to see where and how the themes of the book play with some of the more esoteric and solid ideas that get played out in the Book of Revelation. 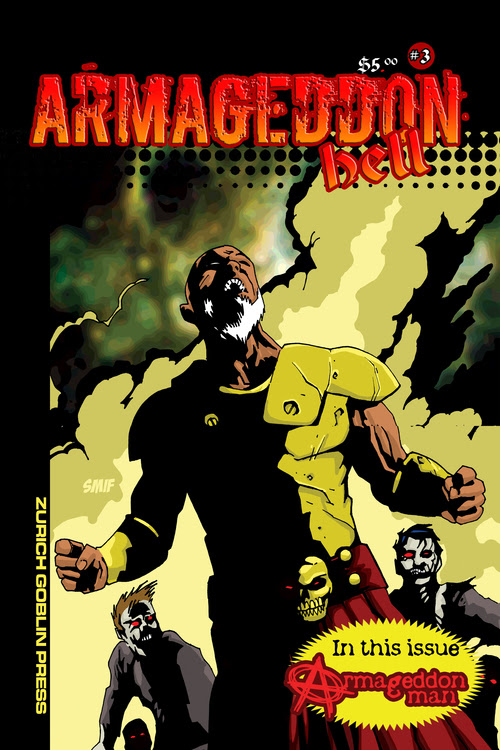 The plot goes something like this: Muriel and Micah battle over the fate of Emma while the homeless man, Dante, and Jake discuss the fate of the world. The angel Baal bestows necromantic power to Goliath and is subsequently challenged by the leader of the four archdukes of Hell, Mammon.

So now with the powers of Heaven and Hell arrayed against one another, things are going to start to really play there parts and loss the doors to the End Times and all of this is going to really get the ball rolling in issue four.

Dan's got an upcoming appearance in Las Vegas (kinda ironic when you think about it) at the Las Vegas Comic Con, Armageddon issue#4 is going to be available and you can get a signed copy.
Using Armageddon The Comic book
as Fodder for Your Old School Campaign

At first this comic series may not really seem like something that your old school OD&D group might be inclined to handle but given the flexibility and nature of the game and its roots back in the 'Satanic panic' this pretty much seems like a match made in Heaven. Given some of the early Dragon magazine articles of demons, devils, angels choruses, this one is a pretty easy idea to actually play with. There are a metric ton of old school resources out there for a DM to pick from. This could be a case of the PC's being brought in by one or more powers as a Prime Material gets ready for its Armageddon and the missions are going to swift, dangerous, and the body count very high. The adventures might be a mash up of Mutant Future/ Labyrinth lord or Osric which already has stats for many of the demons, devils, angels, etc. already built in. PC's can expect little to no help from the locals and the paladins which always seem a problem might become a very high asset as the military assets of Heaven and Hell are let off the chain and things go to the Lake of Fire in a real hurry. For extra old school add in a touch of Dante and really watch the body/soul count rise.  Given my own background and the games of AD&D we played back in school which involved the nine planes of Hell and all of the high weirdness that went with it. This series looks very cool and interesting to me.
Want to know more? Check out the official website for Armageddon right over
HERE
There's a whose who, history, basic plot overview, and more. Buy the book to really get started.