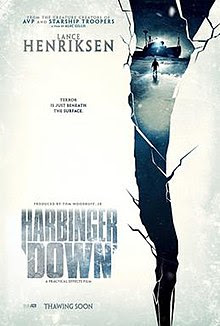 According To Wiki:
After the release of The Thing, in response to fan queries about what became of ADI's effects for the film, Alec Gillis and Tom Woodruff, Jr. uploaded a behind-the-scenes video to Youtube which showcased their original practical effects prior to their replacement. According to Gillis and Woodruff, the video received such an overwhelmingly positive response that it inspired them to create a Youtube Channel which would feature their archived videos of creature effects from throughout their career. These videos not only went on to receive similar praise, but promote requests for Amalgamated Dynamics to launch a Kickstarter campaign to create fund their own independent horror film.[2] Around this time Amalgamated Dynamics had been collaborating with Stan Winston's son Matt Winston on the creation of the Stan Winston School of Character Arts, and it was under his suggestion that ADI launched its Kickstarter campaign.[5] Gillis agreed, seeing it as an opportunity to bypass the studio system which had been compromising their work in the past.[2] Gillis said, "Honestly, we were resistant to it at first, so it wasn’t until I looked around my shop and saw an empty facility that I realized we were actually at the mercy of studios that didn’t actually care about our techniques anymore. They view it as a commodity and a product, and they’ve corporatised the structure of creating art and in the end it all becomes disposable. That’s not how the fans see our work."[2]
On May 8, 2013,[1] Alec Gillis began a Kickstarter drive for Harbinger Down, advertising the film as being a monster horror film that was, "in the spirit of two of the greatest sci-fi/horror films of all time, ALIEN and THE THING",[5] and that would feature only practical techniques to create the films monsters, including the use of animatronics, prosthetic makeup, stop motion and miniature effects,[1] with the films creatures featuring no digital animation outside of rod/rig removal and digital compositing.[4] With a budget goal of $350,000, the film would have Lance Henriksen attached to star,[6] composers Joel McNeely and Michael Larrabee creating the musical score, and would also feature the efforts of Oscar nominated model builders Pat McClung, Robert Skotak and Dennis Skotak.[1]
By 7 June 2013 Amalgamated Dynamics had successfully raised $367,000 allowing production to begin.[7] Gillis' stated that while the money raised by the campaign would be sufficient to fund the "nuts and bolts" of the film, the films special effects would have to be created at Gillis and Woodruff's own expense due to the films low budget.[4] The success of the Kickstarter campaign went onto draw the attention of producer Sultan Saeed Al Darmaki to the project, who provided additional funding for the film through his company Dark Dunes Productions.[8]
Principal photography began on January 27, 2014. The cast includes Lance Henriksen, Camille Balsamo, Reid Collums, and Matt Winston.
The plot of the film goes something like this according to Wiki :
" The plot of the film follows a group of graduate students aboard the titular fishing trawler Harbinger, who are studying the effects of global warming on a pod of Orcas in the Bering Sea. When the ship's crew discover the wreckage of Soviet era spacecraft, they are attacked by shape shifting alien monsters."


Harbinger Down And Your Old
School Science Fiction  Gaming Campaigns

Official Harbinger Down Site Right Over
HERE
For me Harbinger Down represents everything I love about the old school 80's horror  vibe. Practical special effects, a return to solid writing, and movie making as well as more. Yeah I'm in.
The fact is that films like Alien, Aliens, and John Carpenter's The Thing are hugely influential on table top gaming.
The isolation, the man on monster dungeon crawl style fight for survival, the science fictional backbone, and of course the guts, gore, and more are all elements of both OD&D as well as other old school table top games. Harbinger Down brings lots to the table.
There are ton of shape shifting monsters in D&D and Harbinger shows that this genre is far from dead. Using and drawing upon these elements allows a DM to plug in as well as play with deep rooted memories that players have of those movies.
With a bit of work OD&D, Mutant Future, and many other games could be used not simply as a basis for a Harbinger Down survival game adventure. Where the challenge isn't simply getting the treasure but getting out alive at all.
Time and again we've seen formulas that seemed dead, twisted into new life just as our hobby has over the years as well. Harbinger Down will be thawing soon. Personally I can't wait! This looks really well done by folks who know their material!