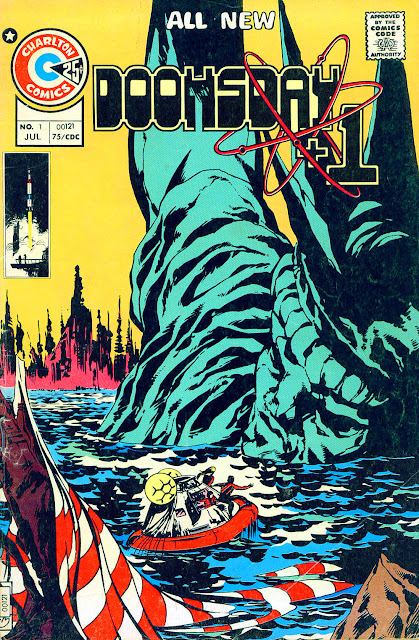 Doomsday +1 has everything I'm looking for in a post apocalyptic comic book for a Saturday. From the Planet of the Apes inspired cover to the curvy astronauts in the metallic space suits. Its pretty much how I remember it. The book had a 'reborn Ice Age' theme about it coupled with the barbarian vibe of a pre Thundarr adventure to boot. There was the inevitable love triangle in the center and more rolling through this first issue and plenty of fodder for your old school post holocaust DYI gaming material. The art was great for a boys from Derby,Ct. product and the writing was fast paced. As the comic went on there was lots of material to pull from for Mutant Future or other game. The comic was well done for '75 and there were lots of interesting and sort new concepts in the background. The comic has remained an old resource and I've got to dig my issues out of the archives. But its nice to see the first issue which brings back so many memories.
The artwork, writing, and post apocalpytic vibe were well done and a nice easy read from Charlton back then and now. 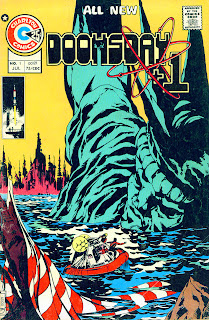 Everything about this comic screams Mutant Future or Gamma World from the main characters to the barbarian NPC in issue one. The total world has lots of PA action in it including many of the usual suspects that we would seen in Gamma World first edition including robots, androids, clones, and more astronauts. The plot line, standards and backgrounds of the comic are easily transported to your favorite old school post apocalyptic campaign with lots of room for your own DM expansions.
If you wish to add in another astronaut or two to the world of Doomsday +1 the route of the original Planet of the Apes movies can be used with a convenient crash landing and exploration of the +1 world. Add in your favorite mutants and your about ready to go. Doomsday +1 remains a great comic by the tireless folks from Charlton. And it remains a favorite relatively forgotten (until now resource) to pull from.
Posted by Needles at 10:14 AM