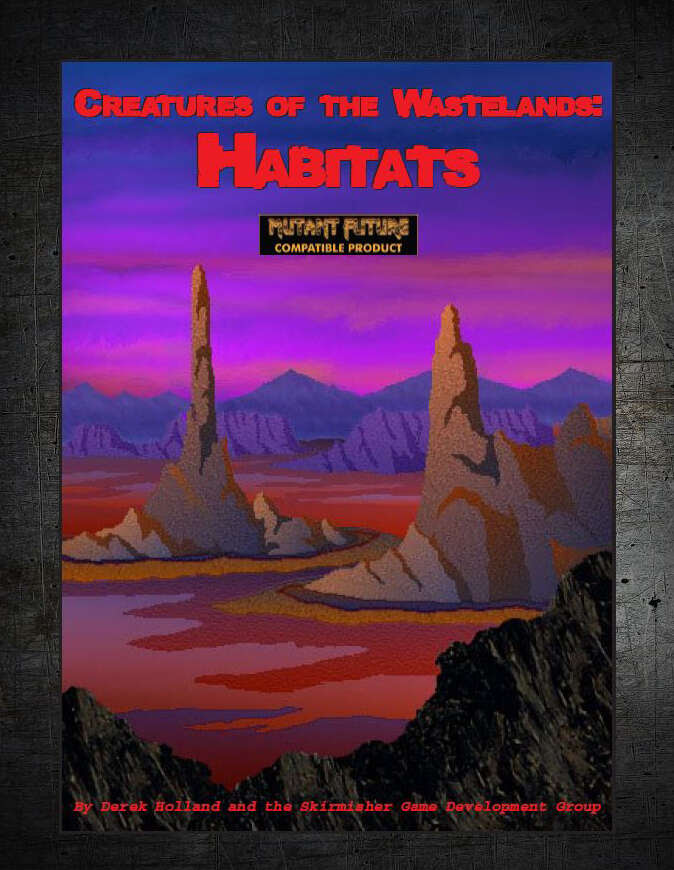 This is one title that I've been meaning to tear into for years and now its finally in my grubby little hands. Habitats is a twenty page book that breaks down some but not all of the possible places and environs to place your mutant monsters for Mutant Future or even Labyrinth  lord. The book is mostly system neutral in point of fact and could be with a bit of work used for a wide variety of post apocalyptic campaigns. There's lots of options here for the DM to really use.
This title brings lots of options to the table for the DM to use. The book is written from a perspective of a biologist (which the author is) or a Gygaxian post apocalyptic ecology that there are all kinds of areas of environment  and pseudo biological logic for placement of monsters. In this regard the book reminds me of some of the older Dragon magazine articles. The early ones as a matter of fact.
The Drive thru Rpg site blurb:

This might seem like a very straight forward title, a few options and locations to place your monsters and mutants then your done. This book has far more uses. The book has the vibe of Dougal Dixon the gentleman who did 'The Man after Man' book and 'The After Man' book as well as 'The New Dinosaur book'  in some respects. That is the environment and location's biological conditions and pressures effect the organisms that will live in these environs.
This really allows a DM to tailor the dungeon or mega dungeon location to the monster or even the reverse. This notation being part of those 'Ecology of' articles back in the halcyon days of Dragon magazine.
This book can also be used as part of a Mutant Future television episode adventure style of play campaign. The environs described could be used as set pieces and the monsters far more then simply things to kill but as problems to be over come as well. The book goes a long way to hammering this point home without laboring the point.
Habitats brings a bit to the table and this title has from what I've seen been forgotten on the shelf because far more important post apocalyptic titles have pasted it by. Too bad there's lessons that can still be minded from this one and I'm glad its in my PA arsenal.
Posted by Needles at 9:48 AM