Grab It Right Over
HERE
Before there was Kirk, Spock, and McCoy there was Tom Corbett Space Cadet! Corbett's crew was busy exploring the solar system and many of his adventures are easily adapted as old school space adventures.
This comic book adventure places Tom and crew right into the cross hairs of an interstellar incident and they could place your old school crew in them as well!
The Dell comics were high quality issues and were very nicely done. They ran from :
February 1952 - September–November 1954 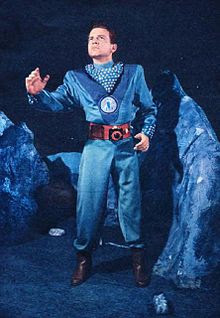 According To Wiki :
The stories followed the adventures of Corbett, Astro, originally Roger Manning and later T.J. Thistle, cadets at theSpace Academy as they train to become members of the Solar Guard. The action takes place at the Academy in classrooms and bunkrooms, aboard their training ship the rocket cruiser Polaris, and on alien worlds, both within our solar system and in orbit around nearby stars.

Tom's real origin went something like this:
Joseph Lawrence Greene of Grosset & Dunlap developed Tom Corbett, Space Cadet, inspired by the Robert A. Heinlein novel Space Cadet (1948)[1] but based on his own prior work. Greene had submitted a radio script for "Tom Ranger" and the "Space Cadets" on January 16, 1946, but it remained unperformed when Heinlein's novel was published. Greene then reworked his radio script into a script for a daily newspaper adventure strip, which was never produced.


The original Tom Corbett series was published by Dell Comics beginning in their 4-Color series. The 4-Color series was used to try out new story lines on the public to obtain feedback. If successful the series would be spun off to form its own title. Tom Corbett won his own title after three tryout issues. As the popularity of the television series waned, Dell stopped producing the comic book and the series was then taken up and produced by Prize Comics.
There were a small number of Tom Corbett comic books in Manga style published in the 1990s by Eternity Comics, but these are regarded as non-canonical by Corbett fans.

For more information on Tom Corbett Space Cadet including a ton of internet support go
HERE
Posted by Needles at 7:22 AM